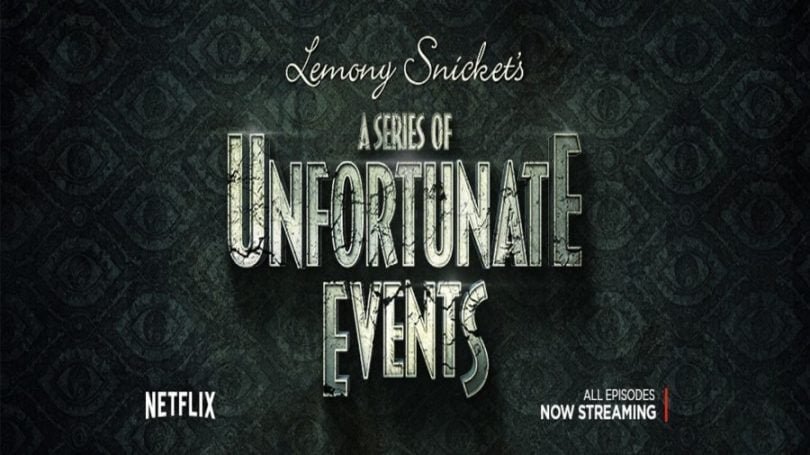 THIS REVIEW CONTAINS SPOILERS YOU MAY WISH TO AVOID

A Series of Unfortunate Events could not be better described by its very literal, accurate moniker. The Netflix adaptation of Daniel Handler’s – under the pen name Lemony Snicket – thirteen-book series is a glorious representation of the tale, perfectly portraying the misery that plagues the Baudelaire orphans.

In case you’ve no idea of the overall premise of A Series Of Unfortunate Events, it follows the lives of Violet, Klaus and Sunny Baudelaire, who become orphaned during their childhood due to a blaze that destroys their mansion home and kills their parents. They are sent to live with Count Olaf, their ‘closest living relative’ – and by closest, it means geographically, rather than familially. Count Olaf’s motive for becoming their guardian, however, is to steal their enormous fortune left for them by their deceased parents by any means possible. The series then follows how they escape from Count Olaf repeatedly as they find new guardians and places to live, but he continues to find them under the guise of various personas that trick everyone but the Baudelaires into believing he isn’t Count Olaf.

This is a show that embraces the fact that it is not a happy story by any means; it and in its own darkness. It’s not all doom and gloom, though. The show captures the pure anguish of the Baudelaire’s lives, but it retains an appropriate level of humorous and lighthearted moments throughout. The series is quirky and different – just like the books were – with the narrator Lemony Snicket appearing onscreen laid over scenes of the show, regularly interjecting to tell us that the fate of the Baudelaire's does not get better and that we shouldn’t continue watching the show.

It closely follows the plot of the books, unlike the film adaptation released in 2004, and the two-episode-per-book format of the series ensures that the deserved carefulness is achieved. The series retains the peculiarities of the books: the constant explanation of words, and the dark-humoured, heartbroken love notes to ‘Beatrice’ at the opening of each instalment. The wicked comic tone is presented in lines such as, "For Beatrice – my love for you shall live forever. You, however, did not”.

A Series Of Unfortunate Events is beautifully shot, with attention to detail and stunning sets that encapsulate the scenes imagined by Handler in the original novels. The symmetry of many of the shots are reminiscent of a gloomy Wes Anderson film, and the sets and props are remarkably detailed and cleverly constructed. For example, ‘The Wide Window’- which spans episodes five and six- is set in a dark, miserable town by Lake Lachrymose, and all of the businesses you can see in the background are, incredibly, fittingly named to reflect this malaise. In the scene you can spot the appropriately labelled ‘Anxious Clown’ diner; ‘Morosa Market’ and- my personal favourite- ‘Momento Morris’ Souvenirs’. In the final two episodes- ‘The Miserable Mill’ Parts One and Two- the eye charts in the optometrist’s office contain secret messages, such as "VOLUNTEER" (which is key to the story of these episodes) and "VFD". If you’ve read the books, you’ll know how important this trio of letters is. It’s meticulousness like this that makes the series so visually beautiful and well-executed.

A Series of Unfortunate Events doesn’t gloss over the inarguably horrendous events that happen throughout, from a forced marriage to a faked suicide to hypnotism that results in an amputation, and nearly a murder. Rather, they are embraced and juxtaposed against humour, though most of it dark. The show is also self-aware and prophetic. A good example of this is just prior to their moving into Aunt Josephine’s house, when Violet foretells: "There's so much we don't know, it's like we're standing on the edge of a precipice with no idea what lies below", with the camera then panning over the house, revealing a building hanging over the edge of a cliff.

It also makes use of foreshadowing heavily, making you go smile with realisation when that thing finally happens. Expect a lot of "Oh, I get it now!" exclamations when watching the series. Lemony Snicket, in one of his narratives, explains that whilst one character is an optimist, this should not be confused with an optometrist. Although, “both can be dangerous”. It later transpires that Dr Orwell, an optometrist in the episode, is instrumental in another of Count Olaf’s plots to dispose of the Baudelaires and steal their inherited fortune.

The characters are all incredibly well cast and captivating. The real star of the show is Count Olaf, played by Neil Patrick Harris, who impeccably portrays the evil yet comical chimaera that Count Olaf embodies. Not only does he play Count Olaf; he plays Count Olaf’s various disguises, whether this be Stefano, Captain Sham or Shirley St Ives. The supporting characters also shine. Aunt Josephine’s sheer paranoia and fear of the world overarches her whole personality, and Justice Strauss exudes a loveable-yet-useless nature throughout. Eleanora Poe is the heartless and unsympathetic- yet completely oblivious- journalist, whilst Uncle Monty is an endearing and eccentric academic with a love of reptiles. Count Olaf’s acting troupe are a treat in themselves, a range of misfits exploited by Count Olaf to assist in his plots against the Baudelaires. They range from the hook-handed man to the ‘Henchperson of Indeterminate Gender’; the audibly disinterested, politically correct millennial who delivers quotes such as, “I just think, even in changing context, that marriage is an inherently patriarchal construction that is likely to further the hegemonic juggernaut that's problematizing a lot of genders”. In some ways, the Baudelaire orphans themselves are the least interesting of all the characters, but that is forgivable when the story and supporting characters are so phenomenal.

What’s key is that all the adults are all incompetent – they’re incapable of effectively caring for the Baudelaires and refuse to believe their claims that Count Olaf is in disguise, and this is what really drives the story onwards.

A Series of Unfortunate Events is timeless. Between the ‘rickety trolley’ they ride to Briny Beach at the very start of the series and the references to more modern aspects of life like Uber and Pink Floyd’s 'The Wall’, it’s incredibly difficult to understand the time period the series is intended to be set in. The final episode ends at Prufrock Preparatory School, the setting for the fifth book The Austere Academy (my personal favourite), despite the series only spanning the first four. It shows two other new students at the school – presumably the Quagmire twins featured in the books, setting the scene to begin the next melancholic tale when series two begins.

I could try to pick out some flaws I’ve found within this series, but I simply can’t fault it. To me, it’s the best adaptation of my childhood favourite I could have asked for. If I really, really had to take issue with it, it would be that there isn't a second series yet.

Did you enjoy the Netflix adaptation of A Series of Unfortunate Events? Let us know in the comments!