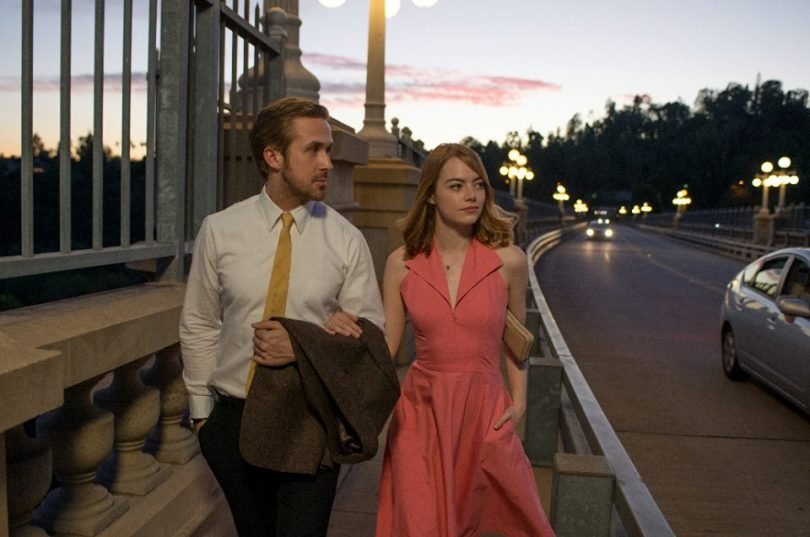 After a record haul at the Golden Globes, with gongs for Emma Stone, Ryan Gosling, and Damien Chazelle, La La Land touches down on UK soil carrying high expectations. With the controversy surrounding last year’s ‘#OscarsSoWhite’ scandal, it perhaps feels bitter sweet that La La Land has taken the limelight from more diverse films such as Moonlight and Fences. Yet this is a wonderfully enjoyable film – a paean to era of MGM, a tragic romance, and a sugar rush of pure, unadulterated joy.

In Emma Stone, the world has found another actress that harks back to the brash, bold, and intelligent stars of the Golden Age; she reminded me of Jennifer Lawrence’s equally hilarious turn in Silver Linings Playbook, and, surprisingly, of Saoirse Ronan’s sensitive and emotive performance in Brooklyn. Her wide eyes, whether filled with tears or joy, breathe a life of their own. Ryan Gosling is a world away from his mute and moody performance in Drive: this truly does feel like his breakthrough moment, the point at which his dramatic and comedic talents have managed to perfectly intersect. Neither are natural born singers – and it does show – but this works to their advantage. Casting someone from a musical theatre background, such as Anna Kendrick, would lose this pair’s natural chemistry in favour of neat vocals.

Damien Chazelle directs a complex orchestra of daring choreography and frenetic camera work adeptly, and handles the film’s quieter beats with elegant poise. Although not as aggressive as his previous film, Whiplash, Chazelle still manages to conjure up incredible emotional power. Stone’s audition scene in the third act is utterly mesmerising, transforming a potentially crude number into a beautiful display of emotional intensity; it’s a nuanced crescendo that anchors the whole film.

Sitting between recent depictions of LA such as Tangerine, with its gritty exploration of the city’s trans sex workers, and The Neon Demon's surrealism, La La Land is aware of its Hollywood origins, viewing the protagonists’ love affair through a lens of vibrant colour, but also tragically in touch with fragile human emotion.

Perhaps the film it has most in common with is Birdman, the technically marvellous but horrifically smug meta-tragedy which won the Best Picture Oscar in 2015. It can be argued that, like Birdman, La La Land is a film partially in love with itself, playing directly into voter’s hands by harking back to a bygone era of cinema. But it’s nowhere near as cold as Alejandro G. Iñárritu’s pretentious and shallow feature.

La La Land has Hollywood gleaming in its eyes and LA deep in its heart. Stone and Gosling are a perfect match, elevating what could’ve been unbearably sweet to new heights (quite literally). After a slightly shaky start, Chazelle handles the material expertly – it’s a near perfect routine of daring and skill, moving swiftly between the blinding lights of Hollywood to the backstreets of LA, tethered back to earth by a tragic love story with a profound message. La La Land reminds us that love, like the movies, doesn’t always end the way you’d expect.