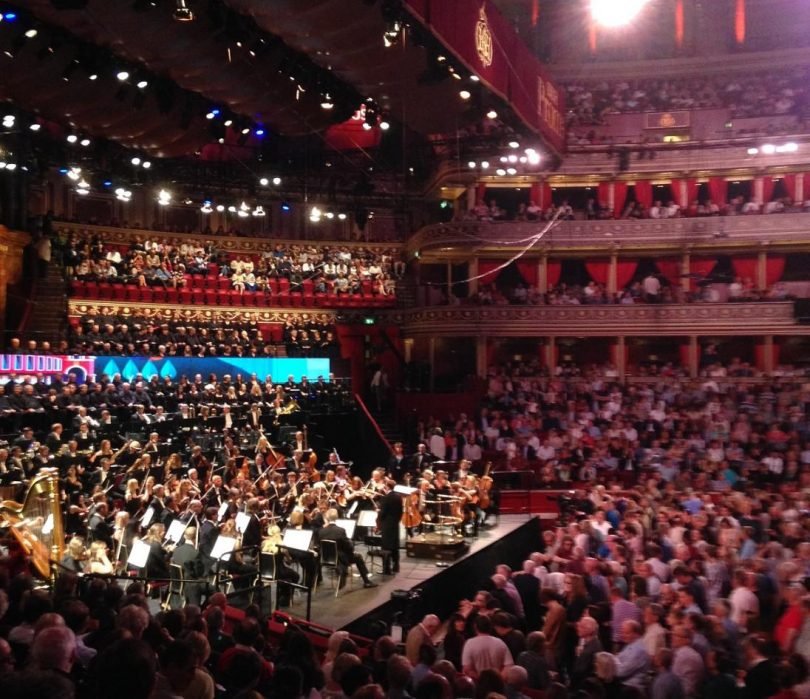 There may not be much sunshine, and our political system may be in chaos, but a few things are reliable in a British summer; Wimbledon, Glastonbury, and the Proms.

The two-month music festival is justifiably famous. Although classical music has a reputation of being exclusive and elderly, the Proms draws an extraordinarily varied and enthusiastic audience. Some book ahead, while hardline ‘Prommers’ queue up, sometimes hours in advance, for on-the-day £6 tickets, which let you stand on the floor of the auditorium nose-to-nose with the performers. There’s no dress code – the audience always has students, tourists, musicians and locals happily rubbing elbows in the huge Royal Albert Hall. The Last Night of the Proms is a famous, flag-waving British institution. The First Night is far less bombastic, but there was a palpable buzz of excitement, and the programme never fails to deliver crowd-pullers.

To start off this season, there was an unexpected addition to the programme. When conductor Zachary Oromo entered, he turned to the orchestra and began with the Marseillaise. Within moments, all the audience were standing, in an unspoken musical tribute to the French people after Nice. It was a uniquely moving moment.

Then the planned programme began: Tchaikovsky’s Fantasy-Overture to his programmatic symphony, Romeo and Juliet. The BBC Symphony Orchestra seemed a little hesitant – and if any setting would intimidate even the BBCSO, surely this was it. The wind and muted violins made a slightly breathy sound in the quiet, fairy-tale opening, but (like the play) the piece gradually builds layers of staccato, adrenaline-fuelled violence with romantic interludes which would be cheesy if they weren’t so beautiful. Once the orchestra hit their stride, they sounded far more confident, and the audience settled in to enjoy the evening.

Following this, more seriously hummable melodies: Elgar’s famous Cello Concerto. Even if you haven’t heard of it before, you are likely to recognise parts, particularly the beautiful cello melody which opens the first movement (and if you don’t know it, go look it up now. Trust me, it will be worth it.) Following up Jacqueline Du Pre’s ubiquitous interpretation (performed four years running at the Proms in the 1960s) is never a small task: doing so in front of 6,000 spectators is terrifying even to think of. Sol Gabetta was an eye-catching, almost balletic performer, with huge energy and enthusiasm. She brought a lightness and spontaneity which made the music entirely her own (and no doubt upset some traditionalists), but faster sections sometimes got away from her, and although the orchestra played unselfishly, the sheer size of the hall dwarfed her tone, especially in higher registers. She kept a trio of communication with the conductor and leader which was nice to see, but could get a little distracting as she swayed through her rests.

When a crowd of stamping Prommers demanded her return, she gave an extraordinary encore – a fantastical piece, apparently based on the sound of a mosquito’s buzz. Halfway through she surprised everyone by joining in, singing the melody. It was a daring piece of showmanship, and the audience loved it.

The second half returned to Russia for the least well-known piece of the evening: Prokofiev’s Alexander Nevsky cantata. (It’s a common Proms tactic – following a crowd-puller with something more challenging.) Unusually for a cantata, the work began in 1938 as the score for an anti-Nazi Stalinist propaganda film. Prokofiev alternates traditional Russian music (complete with sleigh bells) with complex, crashing dystopian sounds depicting foreign invaders, and takes full advantage of the percussion and brass sections. The confident orchestra were joined by the massed forces of the BBC Symphony Chorus and the BBC National Chorus of Wales, who made an impressively unified sound considering they were stacked way up the back of the hall on separate sides of the organ. The singers dealt admirably with Russian pronunciation, but sadly lacked a little of the raw edge one might like from a folk chorus. They made up for it in power and clarity, and the ‘Battle on the Ice’ section was spectacular. Still, the really heartfelt centre of the piece was the contemplative section when a girl (mezzo-soprano Olga Borodina) looks for survivors on the battlefield. The Russian soloist was an excellent choice, and her lyrical, throaty sound matched the music perfectly. A triumphant recap of the Russian folk tunes brought the evening to an end, setting a high standard of excitement and enthusiasm which no doubt future Proms will live up to.

Are you going to the Proms this year? Let us know in the comments below!