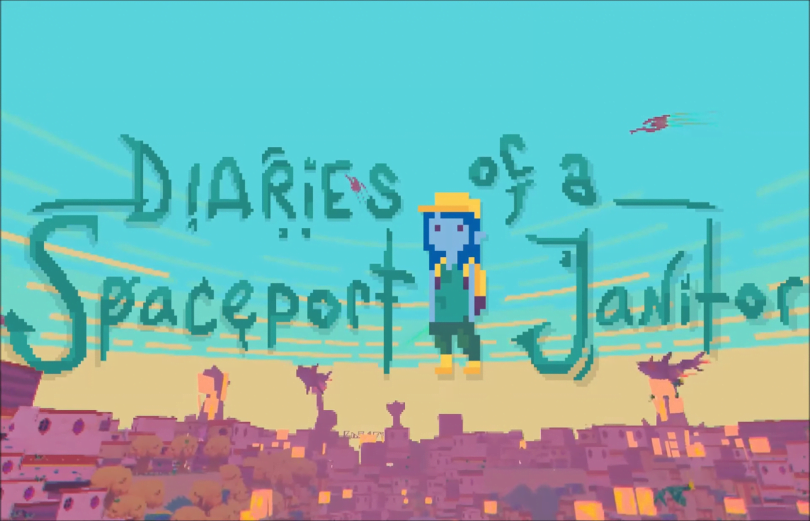 A sci-fi approach to an Arabian bazaar, Diaries of a Spaceport Janitor is a charming and quirky adventure game from developer Sundae Month. We trade the far away and mysterious streets of a Middle Eastern bazaar for something even more exotic, a large spaceport far in the cosmos. Stalls line the street with every kind of delicacy from weird foods to unspeakable luxuries too alien for the human eye. Navigation is difficult through the beautiful mess but landmarks such as a giant sword and shrines to odd goddesses help you on your way. This is not some brave new frontier you are exploring but instead the culture of the spaceport forces the player to adapt as we experience the oxymoronic, something both archaic and new. This is the game’s greatest strength with the low bit graphics adding to this abstract feeling. Even gender is deceptive in the game with various bizarre choices and vendors which allow the player character to move between it with fluidity.

However, your place in society isn’t one of curious explorer or grand adventurer, instead you take the role of a lowly janitor, small, blue, and female. You navigate the spaceport with your municipal job, going around picking trash up off the street with the choice of keeping it, incinerating it, or if you’re brave, eating it. Your job pays poorly, you are a janitor after all, and throughout the game, my wealth never reached more than 80 credits, though the things in the market stalls regularly reached into the thousands. It feels like an intentional choice by the developers to put us in our places, the market had gear, weapons, spells, and armour, sold to great adventurers embarking on epic space quests. You can never afford these items because you’re not the hero, and you likely never will be.

It's a hard lesson but your sad existence isn’t only filled with meagre work. At the beginning, you are cursed by a skull and a quest begins to get rid of it. This begins a stress filled journey, there are so many things to keep track of but only some are displayed in the objectives screen. Add to this the need to manage your finances, eat, sleep, and shift genders, suddenly the experience is anything but pleasant. We also briefly experience a sewer dungeon which has been cleared of any previous fun it might have held by better-equipped adventurers in the past.

Diaries of a Spaceport Janitor is a game that I want to recommend because of its abstractly beautiful world and atmosphere. The anti-adventure fits within a very niche market but a popular one nevertheless, just look at the success of Papers Please or Viscera Cleanup Detail, but this game is too much of a sensory overload to properly enjoy or process. If the game had focused more on the janitorial elements while exploring the spaceport and less on the constant moments of wonder, then perhaps it would have been more for me. If it tickles your fancy it’s available right now for £5.59, that’s 20% off its RRP until the 23rd September. Sundae Month have created an intriguing world with their debut title, one worth exploring but one that should be approached with caution.