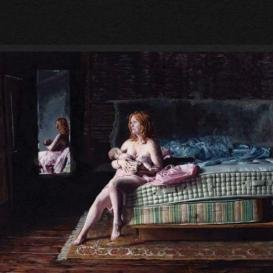 When Jamie Treays disappeared for five years without so much as a “see you later”, there seemed to be only two ways to respond. If you were a fan, you discussed how his debut album Panic Prevention was incredible and his follow-up album Kings & Queens was even better – and where on earth was that third album you so desperately needed? If you were a cynic, you cited his disappearance as just another example of one of those Libertines-esque musicians jumping on the indie bandwagon and seeing how far they could get.

So when,towards the end of 2014, Jamie T released his third album Carry On The Grudge, all anyone could do – be they fan or cynic – was listen. And what they found while listening was a dejected, slightly broken and reflective young man; completely different to the one that left the music scene in 2009.

Opening track ‘Limits Lie’ sounds almost like a cry out, and the croak in the singer’s voice sets the emotional and retrospective tone that is present throughout most of the record. ‘Don’t You Find’, easily one of the more popular songs on the album due to the lulling, reggae style, haunts in a similar way to Wanklemut & Emma Louise’s ‘My Head is a Jungle’.

‘Turn on the Light’ is a song filled with remorse and reflection, and gives listeners a true insight into the invisibility that Treays has felt in his life. He talks about a girl – also known as “a good looking corpse hanging onto me tightly” – who is struggling with herself, but also manages to discuss his own damaged self with lines like “I know I’m sick to my bones”.

The easily accessible and upbeat ‘Zombie’ reminds me of old Jamie T, only this time his boredom, damage and illness has meant he’s painted himself as infected – a self-confessed member of the undead. During ‘The Prophet’ Treays casts himself as the seer of ignored poverty and the observer of the most degenerate lifestyles. He talks of a drug addict being thrown out onto the streets,his slurred words streaked with bitterness as he discards their behaviour in one fell swoop with the line “It can’t be any worse than what I’ve been up to”.

The most disturbing of all the songs on the album has to be ‘Peter’, giving Treays’ inner critic a voice through a piece of brash metal and demonstrating the musician’s talent for torturing himself. Songs like ‘Trouble’ and ‘Rabbit Hole’ show flashes of the kind of lyricist Jamie T is that makes him able to coin tracks like ‘Sticks n’ Stones’ and ‘If You Got The Money’.

The final track ‘They Told Me It Rained’, with lines like “You never lost, I never win”, show the fatalistic tendencies of his writing style that makes him similar to the likes of Pete Doherty et al. But there’s something more likeable about the way that Treays goes about it, which is maybe why he’s managing to stay afloat so well, despite the fact that the loveable indie alt-rock that filled Radio 1 during the mid-to-late noughties has almost died completely.

What do you think of Jamie’s return to the music industry? Let us know in the comments below!