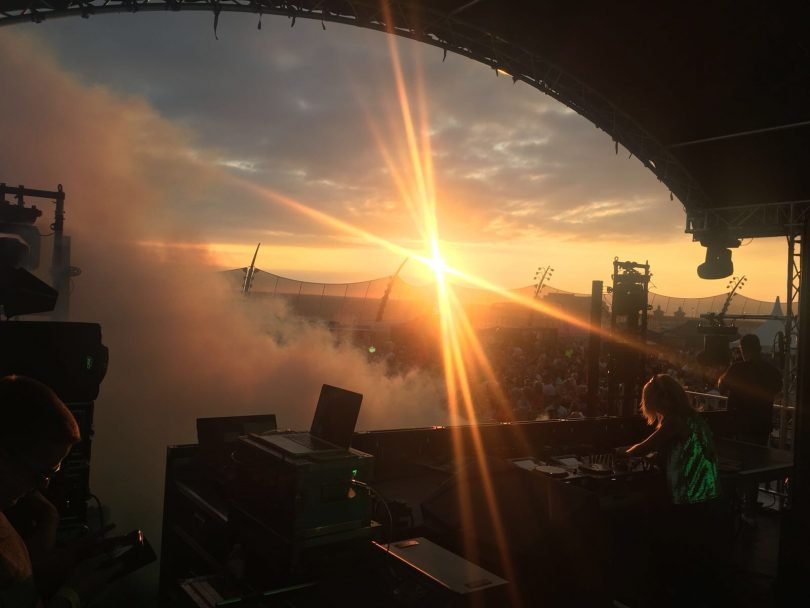 On the weekend of July 6th-8th, the city of Blackpool saw beautiful weather, amazing music and plenty of drinks. I’m talking about this year’s Blackpool Festival at the Tower Festival Headland, an iconic landmark and major music venue.

The location of the festival provided a wonderful view, right next to the sea. The sun was shining pretty much the whole time there and during the golden hour the view from backstage was brilliant.

The ‘hard floor’ festival had no major raised areas or grass, so it was very accessible for people with disabilities or wheelchairs. The festival didn’t provide any wristbands or stamps for entry, so if you left the venue, you’d have to buy another ticket to get in. This was a bit annoying but at least they had a lot of bars and food trucks set up for anyone who wanted a drink or a bite.

On Friday, big names like Example&DJ Wire Sound System, Faithless, Danny Howard and Roger Sanchez had the crowd going with animated DJ sets. I particularly liked Roger Sanchez, who I felt brought a lot of songs that the public enjoyed. I think the only unfortunate thing was that the only cider available was Strongbow Dark Fruit.

However, this changed the next day, with the bars inside the venue offering a wider range of drinks, as well as the space, which opened up, providing more mini-stages with different kinds of music. Saturday headliners Erick Morillo and Paul Oakenfold were the crowd’s favourites, but other acts such as Altern 8, Darren Styles, Judge Jules and Todd Terry didn’t disappoint either.

While the first two days were very much for electronic music fans, Sunday was a family day with lots of attractions to kids. Known children characters such as Peppa Pig and Peter Rabbit were present alongside performances from headliners Andy Day, a Little Mix tribute band and Raver Tots.

All in all, it was the perfect weekend for a music festival. Most things seemed well-organised and with good timing. I gathered the majority of people attending the event were locals, who were very keen on the festival. It brought a lot of excitement and party vibes to Friday and Saturday goers, and also a new fun day out for families on Sunday.