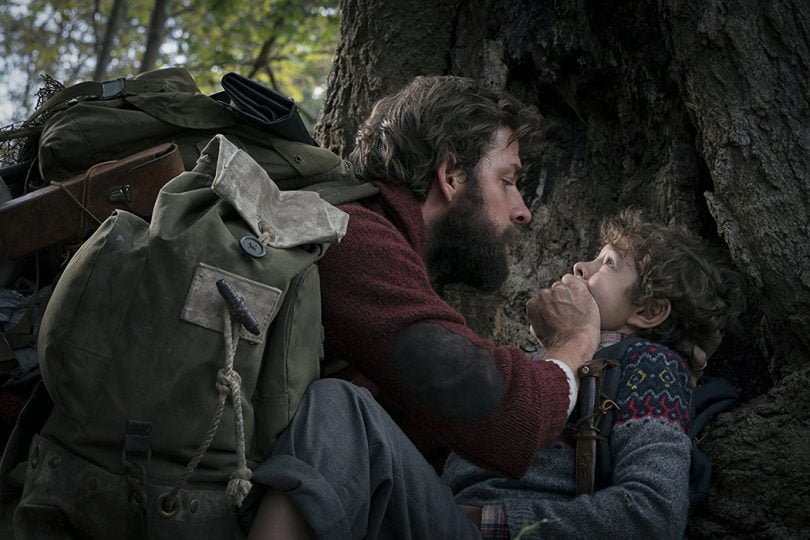 In a world where grotesque, long-limbed monsters hunt their prey through sound alone, Lee and Evelyn Abbott have switched into survival mode. Just like the remaining population, they are forced to live in a quiet place.

Director/star John Krasinski, and his real wife Emily Blunt have an unmatched chemistry as the mother and father. Whilst their children, played by young deaf actress Millicent Simmonds, Noah Jupe and Cade Woodward all succeed in giving fantastically complex performances. As the film begins, tragedy falls almost immediately in an abandoned drug store. We follow the family as they silently trudge along to a new and safer location.

Every trail they make is covered with sand and they walk barefoot, in an effort to make as little noise as possible. The distinction between a ‘big sound’ and a ‘small sound’ in A Quiet Place is expertly established. A person can still get dressed in the morning, eat dinner and play Monopoly; just very very carefully. The first hour is almost silent and the family communicates with each other through sign language. This chilling choice makes the audience frightened to even make a noise themselves, for fear they may put the characters in danger.

The sound design is immensely impactful once it switches to the perspective of their deaf daughter. When we are with her, we hear what she hears. Nothing. This provides a chilling contrast to when we are with the others. Light footsteps, wind and rustling leaves are all staples of their surrounding sounds. However, as a monster approaches, supervising sound editors, Erik Aadahl and Ethan Van der Ryn, switch expertly between her point of view and her family’s, switching simultaneously between the two soundscapes. This creates an unprecedented level of tension and stress for the audience.

At the core of this tension-building monster movie is a question of family and sacrifice. Evelyn (Blunt) asks: “Who are we if we can’t protect our children?”

The film offers a clear idea of nuclear family and traditional gender roles. Evelyn is almost always seen doing something ‘motherly’; setting the table for dinner or doing laundry. She even waves goodbye to her husband and son as they head off to catch fish for dinner. Somehow this doesn’t feel like a lesson or a telling of how it should be. It’s just a loving family who organises themselves to survive in this silent post-apocalyptic world, even if it is into pre-carved archetypes, it’s what works for them.

Playing with genre and taking unexpected leaps, John Krasinski’s directorial debut is a stunning exploration of sound and the lengths two parents would go to protect their family.