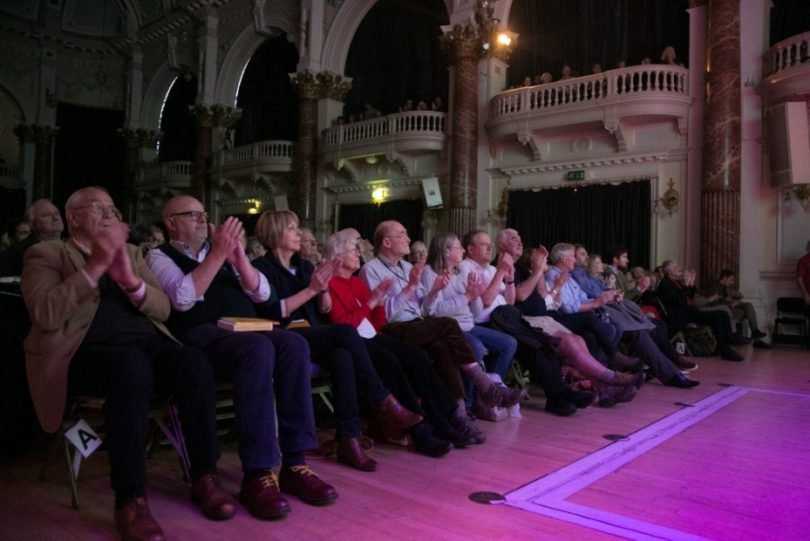 Ray Mears is one of Britain's best-known wilderness explorers and has been teaching others both on and off screen the techniques and skills of bushcraft and wilderness survival for many years. He has recently released his latest book, Out on the Land: Bushcraft Skills from the Northern Forest, in collaboration with Swedish explorer Lars Falt. which looks at the skills and ways in which to survive exploring the forests from the basics of what you should be taking with you to what you to do if you find yourself in desperate need of meat. We headed down to his talk at Cheltenham Literature Festival to hear what he had to say on all things survival, exploration and the beauty nature.

One of the things that comes across fairly quickly about Ray Mears is how humble he is and how whilst clearly having a lot of knowledge and understanding he does not place himself up on any kind of pedestal, and if he does it is only one on which he can share what he knows and help other people be more informed on things. When asked if he considers himself an expert he was very quick to play this down and express his dislike of the term. As Mears said, being called an expert brings the presumption that you know all there is to know and this is never the case, there is always an opportunity to learn and build on what you know. If you are seen as an expert then no one will tell you things, you can end up missing out this way.

Whilst not wanting to be an expert, it is clear that there has been a lot of knowledge and key skills gathered over the years. When discussing his book and his time spent in the Boreal Forest, he explained the real importance of preparation and how it is less about being able to survive those risky moments but rather about being prepared so you don't get into those situations in the first place. It's the basics that are needed and essential in this preparation, from packing the right kit, and not too much or too little of it, to the fact that when it comes down to it as long as you have warmth and shelter you have a great starting point.

One topic that has repeatedly been asked to Mears is his thoughts on the large number of entertainment and voyeuristic television shows featuring survival aspects and situations. Without naming any in particular he expressed how the shows were often so heightened for the entertainment factor that it was almost damaging people's perspectives of nature and the wild. The seemingly life threatening situations and over the top reactions are altering people's idea of how things are and making them frightened to get out there and explore nature. He also explained how the element of the disgusting that is sometimes portrayed only adds to this and it really isn't all the bad.

Hunting, in particular game hunting, was a topic also raised and the answers given may have surprised some. Mears said he considered himself to not be on the side of the hunter or the conservationist but on that of the animal. For him, game hunting is a complex subject but he explained his views on why sometimes it is not such a bad thing. "I'm largely in favour of the expensive hunts because if we don't put a value on wildlife, we won't have wildlife, particularly in Africa.  there are also places where there’s wild game but tourists don’t want to go there because it’s not beautiful – it’s ugly or scruffy and if there’s wildlife there it will be destroyed. So if there’s a hunter who’s prepared to spend a fortune to go there and the hunting is properly organised so largely the hunters are shooting an excess in population or animals who live past their sell by date in terms of breeding then I’m in favour of that. But I would say this is a situation we should review in 50 years time and see where we’re at."

One thing that Mears came back to a number of times was this idea of always learning and how the best way to begin this learning and your exploring is right at home, in the area you know or simply in your back garden. It was how he began and there is so much to explore and find out about right on your doorstep. Throughout there was so much said that could be taken and applied to all aspects of life. That continual learning and the idea of respect as well as beginning things right there at home are such simple ideas that many probably don't give a second thought to.

Leaving the audience with the final thought of 'never look a bear in the eye' the talk came to a close. It was an hour of real thinking time and presented some interesting things to consider. Hopefully, it gave people a chance to rethink what they think of the wild.