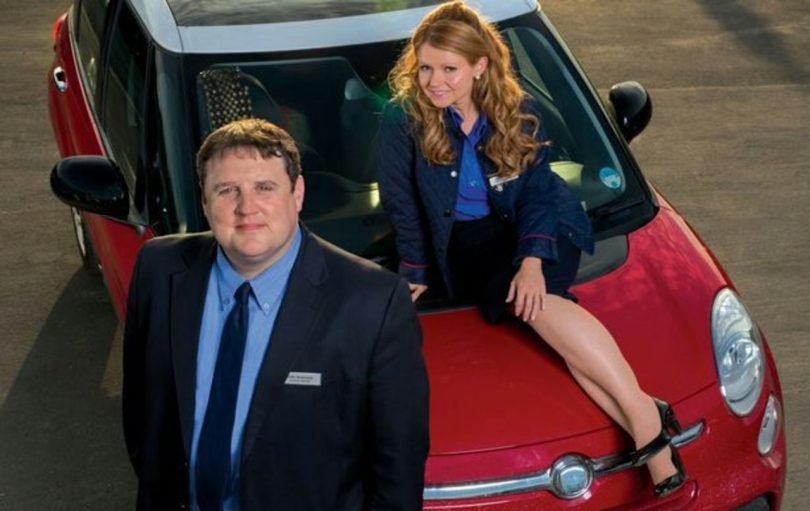 Peter Kay has been a stalwart of television for over two decades. For children of the ‘90s, he is as ubiquitous as hair scrunchies and the Macarena.

He has starred in everything from comedies to chat shows, with even a stint in Coronation Street in between.

The funny-man found fame in That Peter Kay Thing, which served as the inspiration for a certain hit sitcom…

Peter plays not one but three characters in this comedy about Bolton nightclub The Phoenix. The sitcom is full of the type of understated, observational comedy Kay has become known for, and made household names of him and co-stars Dave Spikey, Neil Fitzmaurice and Paddy McGuinness.

Wheelchair-bound Brian Potter was relentless in his quest to make his club a success, to little avail. Perpetually unlucky, the end of series one saw his pride and joy fall victim to a lit cigar at the hands of his nemesis, Den Perry. Nevertheless, Potter’s Phoenix rose from the ashes yet again.

Arguably Peter Kay’s strongest work, the sitcom is full of disastrous characters that you can’t help but love. From Young Kenny’s face being permanently emblazoned with tiger face paint, to Max falling off a ladder through a window (“two words. Falk. Lands.”), they are so impossibly tragic that life seems that bit sunnier for the rest of us.

The sitcom gains extra credit for being the creator of so many hilarious quotes. “Garlic bread”, anyone?

Memorable line: “I want to speak to the organist, not the monkey grinder”

Peter Kay’s talent as a character actor was truly cemented when the first series of Car Share aired in 2015.

It’s a simple premise – a new scheme at a supermarket sees John Redmond and Kayleigh Kitson commuting together to and from work every day. Accompanied by the brilliantly cheesy radio station Forever FM, the pair discuss everything from first loves to favourite party games.

Sian Gibson – who ardent eagle-eyed fans will recognise as Holy Mary’s daughter from Phoenix Nights – is perfectly cast as ditzy, kind-hearted Kayleigh, while the cameos from Reece Shearsmith and Elbow’s Guy Garvey are a testament to Peter Kay’s ability to attract famous faces.

Fans were left disappointed when John continued to be blind to Kayleigh’s advances. Not the only Kay creations to be unlucky in the romance stakes, they will remain the greatest potential love story since Boltonian Brian Potter and Brummie Beverley Hillscoptu.

Memorable line: [in a fit of road rage towards a cyclist] “A breather? You won’t be able to breathe when I open this door and knock you on yer head”

Apart from being the sure-fire winner of the award for the longest programme title ever, Britain’s Got the Pop Factor… deserves a place on this list purely for how bizarre it was.

The novelty acts were positively side-splitting, and, let’s be honest, some of the acts would not have seemed out of place on British reality TV. In fact, the whole show was so ludicrous it could have easily been mistaken for a genuine talent contest. Even Cat Deeley’s breakdown over the unruly audience was scarily realistic.

Kay drafted in old friends Sian Gibson and Jo Enright for diverse group 2 Up 2 Down, and Marc Pickering starred as R Wayne, the North of England’s answer to hip-hop.

After a tense couple of hours, she was crowned the winner and went on to duet with Susan Boyle and release a Christmas single. The latter of which WILL now be stuck on repeat in your head. Over and over and over again.

Memorable line: "You are what you eat. And I'm a Twix."

While not an acting role, Peter Kay’s appearance on Alan Carr’s chat show is too iconic not to include. The accommodating host is known for plying his guests with alcohol in a quest to get some serious gossip, and it seems like Peter had a tad too much of the old Baileys as he took a tumble after swapping seats with Alan.

Proving that he’s funny doing absolutely anything, he faceplants the drinks globe in spectacular fashion. Of course, Alan Carr completely loses it and leaves the funny-man splayed on the floor while he regains composure.

Memorable line: “This chair’s a bit dicky, i’nt it? I’m like Barbarella here”

The comedian left his native Manchester behind for a stint in Danny Baker’s biographical sitcom, as the protagonist's father – complete with south east London accent.

Cradle to Grave was adapted from fellow comedian Danny Baker’s biography, ‘Going to Sea in a Sieve’. It is rare that Kay appears in a sitcom he hasn’t created himself, but his versatility ensures that he is a class act no matter the writer.

As jovial wheeler-dealer Fred he shone alongside Lucy Speed,  and Laurie Kynaston.