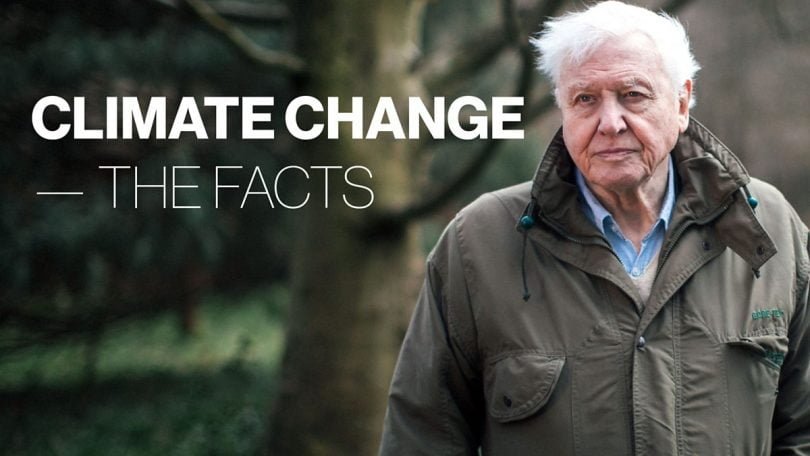 This time last year I was writing my undergraduate English Literature dissertation on how the atmospheres in French absurdist theatre in the mid-twentieth-century demonstrated an increased awareness of the invisible climate around us. Today, in 2019, we are becoming increasingly aware of this climate, as it continues to warm at a rate far “worse than expected.”

Sitting down in front of Climate Change: The Facts, I knew it wasn’t going to be the easy-watching, Sunday evening relaxation that got my housemates and I tuning into Blue Planet II. I felt scared, apprehensive but also excited. Last month, I wrote a piece calling for someone to do for the climate what David Attenborough did for plastic. Thankfully, Sir David has attempted to do it himself.

Climate Change The Facts with Sir David Attenborough. Tonight on BBC One at 9pm.pic.twitter.com/afG5PMezzR

Opening the programme in the green and pleasant English countryside, he reminds us of the stark reality that we are currently facing a “manmade disaster on a global scale.” Climate catastrophe is happening now, even as we sit in the sun with our glasses of prosecco, enjoying this balmy Easter weekend. Not only are we facing the destruction of the world’s ecosystems, we are facing “the collapse of our societies.”

Far from a scare-mongering technique, Sir David explains that his hope is to equip his viewers with a better understanding of what we are doing to our planet. If the average person doesn’t know the facts, then it’s much easier to bury our heads in the sand and nod along when world leaders and the fossil fuel industries label climate change as a hoax. This claim seems almost comical when we consider that twenty of the warmest years on record have taken place within the last twenty-two years. That’s just a year short of my lifetime, which really puts into perspective how current this crisis is.

This is not something that might happen in the future. Millions of people needed humanitarian aid last year due to extreme weather conditions. The programme shows footage of apocalyptic wild fires in Australia, Greece, California and even the Arctic. Beyond the human impact, over 11,000 bats in Australia died because the temperatures were simply too hot, leaving them lined up on the ground, disturbingly reminiscent of human beings after a devastating natural disaster.

I could go on, citing more and more sickening facts and statistics about the melting Greenland ice sheet, the rising sea levels and the fact that Louisiana is losing a football pitch worth of land every 45 minutes. But I’d rather you just watch the programme and see for yourself.

Over thirty years ago, in 1988, Dr James Hansen testified to Congress with a warning about climate change. This warning has become a reality. At the time, politicians made all the right noises, but little was done to actually implement change. We can’t look back in another thirty years with a smug shrug and say “I told you so” – by then it will be far too late. As the experts acknowledge, it’s easier and much more comfortable for everyone to say that we will just adapt to the new climate. But this attitude simply guarantees a devastating future. Just some of the consequences include loss of coastal areas, inability to produce enough food and clean water, further extreme weather and, the programme warns, potential “tipping points.”

Tipping points are unknown but potentially catastrophic and irreversible changes in our ecosystems. Scientists have no way of knowing how the systems in areas such as Greenland, the Antarctic and the world’s rainforests will react to the estimated 3 – 6 degrees Celsius in temperature rise by the end of the century. In this time, our sea levels could rise by between 80cm and 1 metre. The prospect of a ‘tipping point’ is terrifying and can be seen in all processes of change, but hopefully we won’t wait until we hit rock bottom before doing something about it.

It’s overwhelming, the range of different issues causing and caused by climate change, but the programme is good at systematically covering this wide range. Sometimes it’s not easy to join up the dots between fossil fuels, global warming, melting ice caps, sea level rise, deforestation and so on, but in one hour, all bases are covered. Sir David’s tone, only a little less soothing than we are accustomed to, insists in the last fifteen minutes that “the future looks alarming indeed, but it is not without hope.” We still have a window of time, albeit small, in which to take action.

Clearly, something fairly monumental needs to happen to our capitalist, consumerist society. We need to learn to live differently. Our energy production needs to shift from fossil fuels to renewable energy. I was amazed to hear that just one rotation of a wind turbine produces enough energy to power a house for a whole day. Currently 30% of the UK’s energy sources come from renewable energy. If we are to meet the target agreed upon at the 2015 UN Climate Summit to half emissions by 2030 and to achieve zero emissions by 2050, then this needs to increase. Money and time need to be further pumped into finding solutions, otherwise positive changes simply won’t happen.

But what can we actually do today? Climate Change – The Facts gives us some practical and thought-provoking ideas. We can plant trees to capture the carbon in the atmosphere. We can make our homes as energy-efficient as possible. We can buy locally produced food and products made in the UK. We can stop buying into the fast fashion industry and make our clothes last longer. We can reduce our meat and dairy consumption, especially beef and lamb. We can also take a leaf out of Greta Thunberg’s book and take the responsibility into our own hands. Extinction Rebellion may be angering a few Londoners and causing disruption in the capital, but at least they are shouting about it with the hope that someone in power will eventually wake up and listen.

This month’s issue of Be Kind, a magazine promoting sustainability and environmentally-friendly living, suggests a few steps we can all take to make a difference. Some of these include going vegan, reducing or eliminating our consumption of single-use products, reducing our screen time and growing vegetables and flowers in our allotments or gardens.

There really is still time, but not much. We all trusted David Attenborough when he told us to get clued up on our plastics and to clean up our oceans. This time, he says, “Every one of us has the power to make changes and to make them now.” Here’s to hoping that we’ll trust him.

Climate Change: The Facts was on BBC One on Thursday evening and is now available on iPlayer.