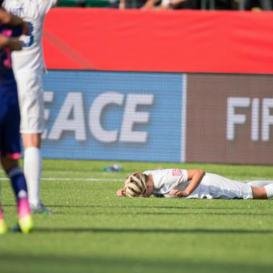 The Lionesses crashed out of the world cup last night after Laura Bassett scored an own goal in the 91st minute, giving Japan a 2-1 victory in the semi-final.

The goal, which cost England the win, came when Bassett tried to stop a Japanese cross to Yuki Ogimi. Unfortunately, her touch fired the ball into the underside of the crossbar and into the goal before England goalkeeper, Karen Bardsley could save it.

The game before the goal looked like it was heading for extra time, as the Lionesses rivalled the performance of the current world cup holders. Two controversial penalty decisions saw the game locked at 1-1 and although there were many scoring opportunities later on in the match, neither side could break away.

The own goal in the last minute of stoppage time was a cruel ending to the English dream and more so to Laura Bassett.

Heartbreak for Laura Bassett and England. The 91st minute own goal that lost the #WWC2015 semifinal #mmlove https://t.co/CdWvdl2wjW

Basset has been one of the rocks in this talented team. Without her and her work rate, England would not have reached the semis. Mark Sampson, England’s manager, looked lost for words last night as he watched his team console Bassett.

“She didn’t deserve this” he told the BBC in the post-match interview. “She’ll be looked upon as a hero.”

The Lionesses will roar once again

Anyone that watched the match saw that the ladies played their hearts out. They physically could not give any more and to rival and nearly overcome the current world champions is a massive achievement.

The ladies are more than capable of bouncing back and they have the opportunity to show that in the third place playoff against Germany on Saturday, while Japan faces the United States in a repeat of the 2011 World Cup Final.

Congrats on making your first #FIFAWWC semi-final, @England. Despite result, you inspired your nation. #Lionesses pic.twitter.com/lqZMjJsr6f

They are a team that have changed the way in how the media reports women’s football and filled the back pages of many newspapers.

They are a team that is inspiring women and young girls across the nation to pick up a ball and head outside take part in the ‘Just Play’ initiative.

England’s Lionesses may not have won the world cup, but they have certainly become part of the move towards equality for women in sport and I think that’s something to be just as proud of.