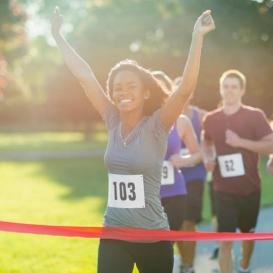 You can’t say I don’t work hard in the name of journalism because this week I went for a run on Christmas Day. And Boxing Day. And on my Mum’s birthday. It hasn’t been a happy week, people. But, if anything, having such a tight schedule is proving to me that it’s always possible to make time for a run, and going out for half an hour on Christmas day really didn’t affect my plans or enjoyment of the holiday at all.

The end is in sight

This week’s run steps it up one more notch from previous weeks and is a grand twenty-eight minute jog. And you really can do it. It’s only three minutes more than last week and you’re now only two minutes away from the full half an hour and the full 5k! Gradually, over the past eight weeks, our normal running time increased from five minutes to eight, fifteen, twenty and now twenty-eight, which really proves how quickly you can progress just by sticking to the programme.

As we get closer to the end it’s important to start consolidating everything we’ve learnt and keep it mind for the final runs:

Nine weeks has definitely felt like a long time, but it’s important not to look at the end of next week as the last run or the end to the programme. Instead, look at it as the beginning, and start making preparations to run on your own, without the help of the podcasts. At this stage in the programme, I feel and look much better, and am also finding it easier to get out and run, as I know I’m capable of doing it and that it’s not going to impact on my day.

So, if you’ve made it this far with me, I’m really proud of you, and by the end of next week, we’ll be victorious.

Have you been following Alex’s progress? Have you been running with her in spirit? Has she inspired you to begin the NHS Couch to 5K? Let us know in the comments below.