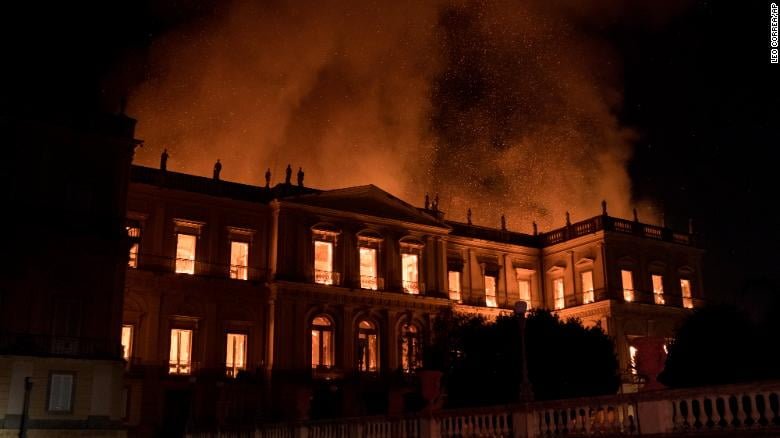 The devastating fire that ravished through the National Museum of Brazil on the night of 2nd September is a terrible reminder of how preventable catastrophes can destruct the fragility of history in a matter of hours. It is a warning of how ancient relics and precious memories of the past are constantly at stake if their value is neglected and their institutions are no longer cared for.

Described as a “lobotomy of the Brazilian memory” by the former environment minister Marina Silva, this immense destruction of the most important museum in South America is a sign of how developed countries take ease of access to knowledge and education for granted. A whole nation’s loss is in adamant rejection of the notion that institutions dedicated to teaching and preserving knowledge, culture and history are considered as boring. The museum boasted a vast collection of anthropology, Egyptology, palaeontology, natural history and a library of 500,000 books, as well as recordings of extinct indigenous languages. 90% of this collection housing 20 million artefacts in the former royal palace of Rio is now itself an ashen relic of history spanning two centuries. The 11,500-year old human skeleton, Luzia, is amongst the rubble, along with Pompeiian frescoes already accustomed to fiery disasters, and recordings of extinct indigenous languages.

A fire ravaged Brazil's oldest museum, destroying priceless artfiacts including the oldest human skeleton in the Americas and a meteorite from 1784 pic.twitter.com/expLvRjB9p

Concerns have been raised about the condition of the building and safety of the artefacts being housed there since the 1950s, stating that tragedy even nearly 70 years ago was imminent. However, budgets for cultural establishments in Brazil have been slashed by the government, as a part of austerity measures, since Michel Temer became president in 2016. There was no sprinkler system and upon arrival at the scene, firefighters had to use water from a nearby lake, as the two closest fire hydrants were empty. The museum celebrated its 200th anniversary in June without a state official in sight.

Luiz Duarte, vice-director of the museum, told press, “For many years we fought with different governments to get adequate resources to preserve what is now completely destroyed.” A $5 million investment had been secured from the Brazilian government development bank to install a fire prevention system, however it was due to be paid out later this year. Duarte has labelled this as a “most terrible irony.” Another irony is that there have been funds and plans for a new “museum of tomorrow”.

So strapped for cash, the museum has been forced to rely on the public to financially assist some reparations. A crowdfunding scheme was needed to raise $15000 to restore a termite-infested wooden case that held a 42-foot dinosaur skeleton last year. It is now appealing to alumni and students of the Federal University of Rio de Janeiro, which currently manages the museum, to send any scans and photocopies back to the institution, in an attempt to salvage a living, breathing educational centre out of its wreckage. Towns situated several miles away have spotted historical and scientific documents blowing in the wind.

Yet Temer’s government has tried to gloss over these cracks by picking and choosing where fortunes need to be forked out. A total of $24.71 billion has been spent on the 2014 World Cup and the 2016 Olympics, whilst people watched firework displays held at the Opening and Closing ceremonies from their slums. A Guardian report in 2017 detailed that the facilities had fallen into disrepair just a mere 6 months later due to lack of funding. Organisers promised that these venues would benefit the residents of Rio, yet they have been looted and have only reduced financial help to impoverished communities. Only a quarter of the funds spent on the stadium would have been sufficient to repair and restore the museum’s decrepit condition. Rio is already struggling with failing education and transport systems; hospitals are lacking in medical staff and equipment for basic procedures and blood transfusions. The government is clearly more hell-bent on the image it presents to the world rather than the country and identity it should be maintaining and embracing for its citizens. Holding a position on the world stage shouldn’t preclude preserving a country’s 500-year long history and heritage.

Temer’s presidency may be responsible for the almost total abandonment of the former palace where the Brazilian and Portuguese royal families used to reside, but they are not the only ones to blame for neglecting its contents. Only 150,000 visitors came to the museum annually – comparing that to almost 6 million people visiting the British Museum last year, it is fairly obvious how Brazil’s culture has been at crisis prior to the catastrophe. As it was situated in northern Rio, it was described as the most accessible museum for Brazil’s poor, however only the rich are educated and consequently encouraged to visit exhibitions abroad, in turn neglecting their own culture. In particular, there is fury amongst descendants of indigenous tribes, as they can no longer track down and appreciate sacred artefacts belonging to their past. As a result, their cultural identity has been completely erased.

Wisdom is ubiquitous and yet so vulnerable. Reduced to a blackened husk of magnificence, Rio’s recent loss has left its mark on the precious contents in all academic institutions – no matter how valuable an artefact is, negligence is the easiest way to vanquish its worth.