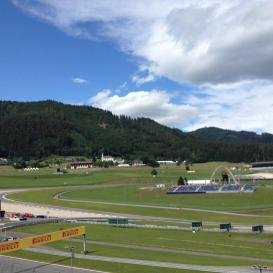 Going to a Grand Prix is surely on the bucket list of any motorsport fan. Tickets can be incredibly expensive so it’s worth saving up for them. If you’re like me and can’t afford to be jet setting so often then a different F1 race each year makes the experience fresh each time. I was lucky enough to go the Austrian Grand Prix this year with my parents and, having previously been to Spa and Silverstone, it was definitely my favourite yet.

Red Bull sponsor the Austrian track which only reappeared on the F1 calendar last year. It’s a fantastic track and the views from each grandstand are pretty spectacular; fans are able to see a lot more action than some of the classic circuits. On the Thursday we walked around the entire track, albeit due to a parking mess up, but it was certainly worth it and you could see everything that was going on. The views from the highest point, where most people with general admission tickets tend to sit, were pretty amazing.

The circuit is built in Spielberg, in between the Austrian mountains and trees. Even in the rain the view is incredible in whichever direction you choose to look. The only downside of the height can be the unpredictable weather, going from heavy rain to scorching sun in only minutes so you need to be prepared with both raincoats and sun cream to hand.

We were situated in an uncovered stand along the straight that immediately follows the start-finish straight, gifting us views such as Lewis Hamilton spinning off track in qualifying. But from there we could also see Nico Rosberg spinning out – true it was a long way away but you could see his Mercedes struggling in the gravel. We also saw a lot of overtaking and even witnessed Fernando Alonso’s car skimming across the barrier in the distance to our left.

F1 is a notoriously difficult event to organise with so much going on and plenty to think about it. When abroad it is always best to double check your tickets, parking and anything else you might require beforehand. The Grand Prix itself stuck to all the timings given and inside the track there were plenty of food and merchandise stalls for everything you could want from your experience.

Parking can always be a bit tricky at an F1 but thankfully in Austria it is free. Police are always around to help but they do tend to direct people to wherever they feel would be best to divert you from causing any extra traffic. On the Thursday we were sent to a parking area which was on the complete opposite side of where our seating was but after talking to one of the attendees they were able to ensure we went the right way for the rest of the weekend. It’s always a good idea to check these things before and even learn a bit of the language so you don’t get into any confusion.

We got a hire car for travelling but there are plenty of buses and parking services away from the track where you can then cycle in instead. One thing I do have to praise the Austrians for was the state of the toilets. They were immaculate and every single time I went I bumped into a cleaner who was topping up toilet roll and brushing the floor to not get it messy. Whenever attending a Grand Prix I can’t help but picture the disgusting overflowing mess of the Spa toilets so it was pure bliss to go to the toilet in Austria – the taps and hand dryers were warm as well!

If you have a weekend ticket then definitely check out the Thursday pit lane walk. It can be crowded and the Austrian one was certainly not the most organised but it gives fans a chance to look closer at the garages and Ferrari even did some practice pit stops for the fans. Ensure you get to the track early across the weekend to watch all of the GP2, GP3 and Porsche action too; it can be incredibly exciting and there tends to be more crashing and drama than in F1.

The race itself is always exciting no matter which Grand Prix you attend. The amount to see in Austria was great and I often found myself unable to choose where to look as so much was going on. There are plenty of big screens around as well to witness anything that isn’t in your direct line of sight. For Hamilton fans it wasn’t so great as his team-mate Rosberg overtook him at the start and led the rest of the race.

At times it was slightly processional with the drivers unable to overtake each other but the retirements certainly made the race. The noise of the engines is also a good insight into the teams as after a pit stop Jenson Button drove past sounding pretty off-kilter. Sure enough he retired on the next lap with engine failure.

A lot of the fans around us were eager to see Sebastian Vettel on the podium, Vettel being German and previously a key part of the Austrian Red Bull team. The race was spiced up when his pit stop lasted a very long 13 seconds which totally ruined his race, leaving him in fourth instead of on the podium where he should have been.

#Seb5 ‘These things can happen, I still believe the team has done an incredible job’ #AustrianGP #redseason pic.twitter.com/OaDi4uVgog

The track invasion at the end of the race is always pretty special and we headed straight round towards the pit lanes. From where we stood we managed to glimpse the standard Mercedes team photo shoot with both Hamilton and Rosberg really close to us. As we were ushered on by marshals we also caught sight of BBC presenters Suzi Perry and David Coulthard interviewing Nico with Sky presenter Ted Kravitz waiting at the side for his turn.

When going to an F1 event abroad it is always a good idea to take a few days either side to explore where you are. We flew into Vienna but as the track is situated further south we weren’t able to have a look round the capital at all and it is definitely somewhere I’d love to explore in the future.

We travelled the two and a half hour drive to a little village called Koflach, 50 minutes from both Spielberg and Graz in opposite directions. The drive to the circuit at Spielberg was pretty treacherous, winding up into the mountains and back down to the other side every day. But it was worth it for the stunning views, even if we didn’t like looking down. We went on a day trip to Graz which, as Austria’s second city, was a lovely place with stunning views. We went up the old castle in the centre which offers great views and a clock tower.

There are plenty of places to visit around Austria and plenty of restaurants in the surrounding areas of Koflach too. We stayed in an apartment in the mountain and the owner and his neighbour was really helpful in telling us of places to visit. With our own kitchen at our disposal we opted for home cooking though as the long days left us wanting to relax back at the accommodation.

Overall, the Austrian Grand Prix was a great experience and I would definitely recommend this circuit over and above the classics of Spa and Silverstone. With great views of the track and the scenic mountain backdrop it really is a treat for the eyes. Austria has plenty to offer and it is worth taking some time to do day trips to different places to experience more than just the racing.