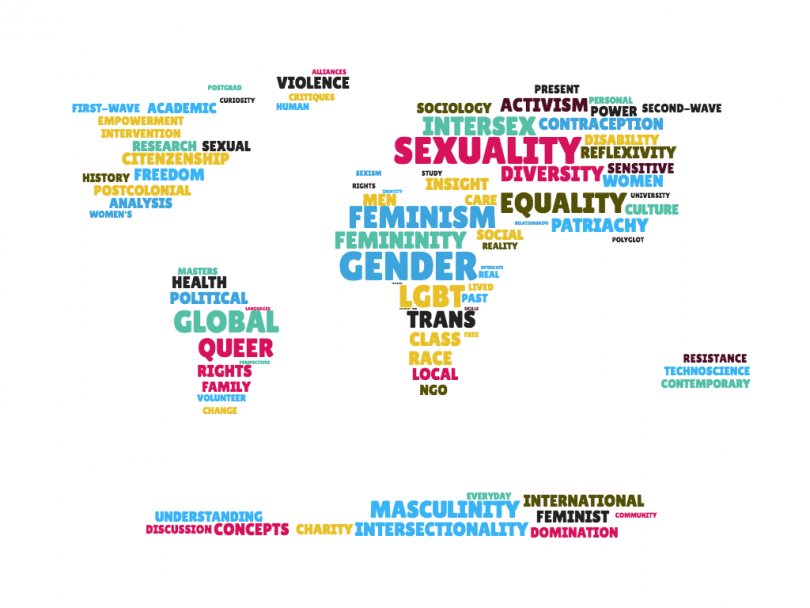 When I tell people that I’m studying an MA in Gender Studies, I’m typically faced with some pretty poor and misinformed reactions including: “Eh? Gender Studies? Is that just a bunch of women sat around complaining about men?” “Are you going to be able to get a job with that?” “There can’t be that many people on your course…” “Are there any boys who do it?” and so on…

The amount of students on the course offered at the University of Leeds almost doubled from 2015 to 2016 with an additional 12 students taking the MA. There are a variety of people on the course who represent various gender identities, come from all kinds of different backgrounds and cultures, and between us there are more than 19 different languages spoken, including a student who can sign-language.

Students with a masters in gender studies go on to do a wide range of careers including: teaching, working for NGOs, campaigning and activism, further study, journalism, law and many more.

The research, analysis and communication skills that the course provides you with means there are plenty of options for students to go on to do. The course in general provides us with an overview of the gendered inequalities that we face in society both in the past and now, and what we can do to tackle these issues.

So what exactly is a MA in Gender Studies, and why is it becoming more popular? With the help of some fellow students and lecturers, I want to bust a few myths about Gender Studies at Master’s level, explaining what it’s really about and why it’s so important, from those who actually do the course.

“In September 2015 I began volunteering for a local women’s charity Support After Rape and Sexual Violence Leeds. It was through delivering frontline women’s services as a helpline volunteer, supporting survivors of sexual violence, that I fully realised the extent of gender discrimination and the necessity for more conversations and studies about gender inequality.

“Flash-forward a year on and I’m studying for my M.A in Gender Studies at Leeds with a view to work for a gender based charity in the future.

“The course offers an in-depth insight into feminist, queer and postcolonial theories (among many others); ways that we might research gender in a sensitive, effective way; and discussions revolve around important relevant examples relating to gender in the changing, technological world in which we live.

“If you are interested in how gender is experienced differently and want to learn from other’s experiences by having important conversations, then I would wholeheartedly recommend studying gender at master’s level.”

“An understanding of gender relations in society has never been more important, locally, nationally and globally. Courses like those at CIGS (Centre for Interdisciplinary Gender Studies), and those run by other feminists across the country, enable students to think critically and reflexively about gender relations in all their complexity, and in ways that enable them to engage politically with the social world.

“These programmes also enable students to form alliances with feminists from around the world that will endure well beyond the degree programme itself.

“In a moment when the future president of the United States can talk unashamedly about sexually assaulting women and still be elected, I can’t think of anything more important than trying to understand gendered power relations and our own complicated relations to them, as well as seeking out points of intervention and resistance.”

“I applied to do an MA in Gender Studies because I had been working in the public sector for sometime and wanted to specialise in sectors where a knowledge of gender issues would be useful. For example, working with survivors of domestic violence.

“On a personal note, I have experienced sexism all throughout my life and I wanted to empower myself to challenge this.”

“The reason why I choose gender studies is because I've seen loads of gender inequality issues in our everyday lives. Some women are suffering from the ideal female gender roles.

“The most horrible thing is that they blame themselves if they do not fit the ideal image of women. Men can also be victims under the typical gender stereotypes. So I'm really curious how those roles and 'truth' are established in the society; what things we can do to help ourselves and others to live more freely.”

In a world that is becoming ever more uncertain, it is imperative that the students of today equip themselves with the tools and knowledge to challenge what faces us.