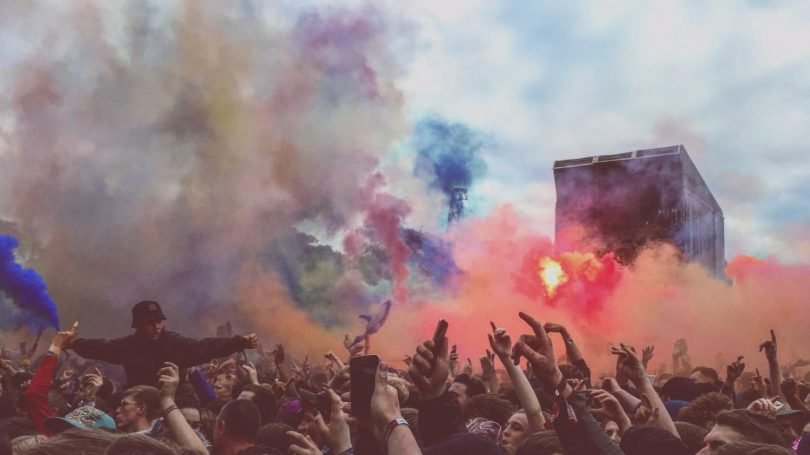 The drifting scent of cinnamon and pine, the annual battle of TV adverts and an increasing energy of 'festive jolliness'. There's no mistaking it, Christmas is well on its way.

So while you battle daily with the worsening weather, bask in a trip back to summer 2016, when festival season was at its height and cider and shorts were everyone's go-to accessories.

Leeds festival 2016 certainly had it all; the sunburn, the rain and of course, the rivers of mud. For one weekend in late August this year, the fields of Wetherby homed the best up and coming music acts, as well as thousands of keen music lovers – a combination that won't be forgotten anytime soon.

Get ready for next year's festival season and get through a by having a look at what Leeds 2016 had to offer.

I'm afraid my Britishness won't let me go any further without telling you about the weather – I'd have sent a postcard if I could, promise.

It rained (after we put up our tent – hallelujah!), got very muddy and beamed beautiful sunrays. The wonders of British summertime never cease to amaze.

After a sheltering from the rain inside what essentially became a Strongbow brewery, we felt it was the right time to venture out to see what Leeds Fest had to offer.

Acts for your radar

First, a couple of bands you should definitely check out if you haven't already – I've even included their videos below to make your new music search especially easy!

London-based four piece INHEAVEN have been the ones to watch for 2016. Having seen them earlier in the year at Liverpool Sound City, I was determined not to miss them at one of the biggest festivals the UK has to offer.

With a much better turnout than to Sound City, the atmosphere led to a bouncing set in the Festival Republic Stage. Given the lack of female acts on the Reading and Leeds line up, INHEAVEN gained extra points in my book for having a talented female bassist, as well as for having a frontman who could wear the heck out of a velvet shirt.

Another Festival Republic Stage find was DMA'S. On first listen, you wouldn't be blamed for assuming them to be a Manchester-based band, rather than Australian. Influences of Oasis, The Verve and Stone Roses shine through, and watching them live transports you to Britpop of the early 90s. 'Delete', 'Too Soon' and 'Timeless' all had their flag flown proudly but it was 'Lay Down' that was the winner of the weekend, never mind the set.

If you want to really hear the beauty in frontman Tommy O'Dell's voice, their cover of 'Believe' by Cher will bring tears to the eyes – you've been warned!

(Another act for your radar – the churros. The food vendors at Leeds definitely did the best Spanish pastry.)

I could ramble on about every act seen, but because I know you have Christmas presents to buy and Mariah Carey to sing to, here's just a snippet of the best.

The Vaccines proved that their old tracks weathered well with time, with 'Blow It Up' the winner of the set. It was also an insight to see the bizarre way many women expressed appreciation for The Vaccines' music. The only logical conclusion I can come to is that lifting your top for 'the big screen' is an act of protest against the gender pay gap. You go girls.

Saturday night offered up highly anticipated co-headliner, Foals. When we finally made it into the arena, it was seven at night, raining again and we were fully prepared to get drenched to the sweet sounds of Yannis Philippakis' vocals.

Special effects were fully geared up for 'What Went Down', with streaming jets of fire erupting for the floor being matched by the aggression of the band on stage. Understandably, the crowd was going insane, but due to an ill-timed bathroom break, it wasn't until 'Two Steps Twice' began that I was reunited with the group and able to really appreciate the energy.

It was a given that Sunday headliners Red Hot Chili Peppers would put on a show to remember, but it wasn’t just the oldies that made their set live up to expectations. Sure, seeing 'Can't Stop', 'Dani California' and 'Give it Away' live will be an experience to cherish, but 'Dark Necessities' turned out to be a serious competitor.

Surprising toppers of RHCP were Slaves, who despite a late entrance and dislocated shoulder brought more energy than half the bands you'll see in a lifetime. 'The Hunter' was the showstopper, and ultimately the song that solidified our decision to go and see them on their November tour.

…and not the best

While embracing the upbeat atmosphere and general excitement that Leeds Fest had to offer, there were a couple of times when sets didn't seem to give off the same vibe.

If you feel like you've never experienced a real onset of claustrophobia, but it's something you're interested in trying out, head to a Wombats set next time they're playing the NME stage at Leeds.

They haven’t always been a huge favourite of mine, but their poppy tunes were no doubt pulling in a big crowd – one that had no time or need for this breathing lark.

Of everyone we got the chance to see, my only real qualm of the weekend music-wise was with the Courteeners. While the music was great (as a Courteeners fan I can testify), there's a huge effect on a performance when a band just don't seem to want to be there.

Apparently the flares, enthusiasm and love from their predominantly Northern crowd weren't enough for the Middleton-based four piece, who struggled to show excitement to be alive, let alone playing the headline stage of Reading and Leeds 2016.