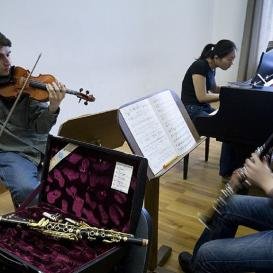 When Atlanta Yeatman was considering what to study at university, she wanted to pursue her interests—Drama and Philosophy. After finding that a joint honours degree in both was possible in only five universities, she found Bath Spa University, which offered both.

“Unlike many students, I haven’t come here with a plan or with a job in mind,” Yeatman said in an email interview. “I was unsure what I wanted to do with my life so I decided to come here to carry on studying what I love. I simply intend to improve my knowledge in the areas that I’m passionate about.”

The interest in Drama courses particularly is on the rise, especially with students in conservatoires. Data released from UCAS earlier this month indicated that the admittance of students to Drama, Music and Dance courses to conservatoires, like the Royal College of Music in London, went up last year by 10 per cent, to 2,020 students.

Yeatman says the popularity of the course is down to what benefits it can offer.

“Drama is becoming more popular with other subjects,” Yeatman said. “This shows that as well as being academic, people have the confidence which comes with a drama degree as well as people skills.”

Additionally, UCAS’ data showed that 60 per cent more women applied in 2014, but the number of students placed were similar among both genders.

Our report out today shows numbers placed on Music, Dance & Drama courses at conservatoires increased by 10% in 2014 http://t.co/GFUuBF5yWt

In a statement, Mary Curnock Cook, the chief executive of UCAS, said competition for these courses remained fierce.

“Graduates from Music, Dance and Drama courses play an important role in our cultural life,” Cook said. “These courses are rightly sought out by applicants across the world and entry is often very competitive. However, while the gap between rich and poor is reducing, the six fold difference in entry rates remains a key challenge for this sector.”

Hilary Boulding, the chair of Conservatoires UK, the organisation that represents the UK’s conservatoires, said the trend was indicative towards the necessity industries had on students studying at these institutions.

“The Cultural and Creative Industries are the fastest growing industry in the UK, a trend mirrored by the 10 per cent increase in acceptances to conservatoires,” Boulding said. “These professions look to the UK’s conservatoires to provide them with a regular flow of talent. This is a field in which the UK excels and our graduates continue to succeed at the forefront of a global industry.”

That interest, Yeatman says, is likely to continue for students, and conservatoires are likely to be at the centre of it, in spite of likely cuts to the arts and to cultural industries.

“Theatre is becoming more accessible to people which creates more interest,” Yeatman said. “It’s being more important to have many skills for employability which drama can teach us. But on the other hand, arts funding is probably going to face cuts which makes it a harder area to get involved in. I think conservatories will become more popular as it shows real potential to get there!”

Are you a Music, Drama or Dance student? Why do you think the interest in the subjects is on the rise? What is the future for those subjects? Have your say in the comments section below.