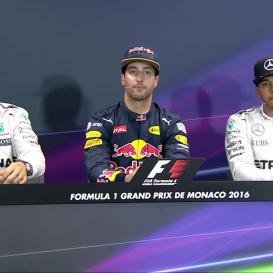 The Australian earned Red Bull’s first pole position since Sebastian Vettel achieved the feat back in 2013, in the Brazilian Grand Prix.

Red Bull teammate Max Verstappen will start from the pitlane and will be in for a long afteroon tomorrow after he collided with the barriers in Q1. This comes just 2 weeks after Verstappen became the youngest ever driver to win a Formula one race, following his success In Barcelona.

Lewis Hamilton appeared to have more bad luck, after his car sustained a fuel pressure issue just as he was about to go out on track in Q3. The Mercedes team were able to salvage Hamilton’s car, and the 3 time World Champion ensured his title chances are still alive and will start tomrrow’s race from third on the grid.

As for Nico Rosberg his reign as the king of Saturday’s in Monaco is over and had to settle for a front row start. Rosberg has been on pole for the last three seasons and will be chasing Daniel Ricciardo on Sunday hoping to maintain his superb form this season.

Ricciardo’s sensational lap in Q3 blew the rest of the field away, as the Australian recorded a 1:13.622 on his first lap in the final session. This follows the news that Ricciardo’s car had been fitted with the new Renault engine, which team principal Christian Horner says Is two tenths a lap quicker.

“After Barcelona I feel like I’ve been driving well, but I haven’t got maximum reward” Ricciardo reflected after the qualifying session. Ricciardo also said prior to the race that “it was his time”.

However, there was disappointment for Ferrari in Monaco, as Sebastian Vettel could only achieve 4th place on the grid, whilst teammate Kimi Raikkonen secured 6th on the grid. Raikkonen however was awarded with a 5 place grid penalty following gearbox issues meaning it had to be changed before Q1, once again raising question about the reliability of the Scuderia’s.

The emergence of Red Bull over the last few weeks may provide concern for Mercedes and Ferrari, as Verstappen’s victory and Ricciardo’s pole in Monaco certainly will send a strong message out to the two leading teams.

Further down the Grid, Fernando Alonso again secured his place in Q3 by achieving a tenth place finish. The top 10 also included 6 different teams, reflecting the competitiveness of the drivers in recent weeks.