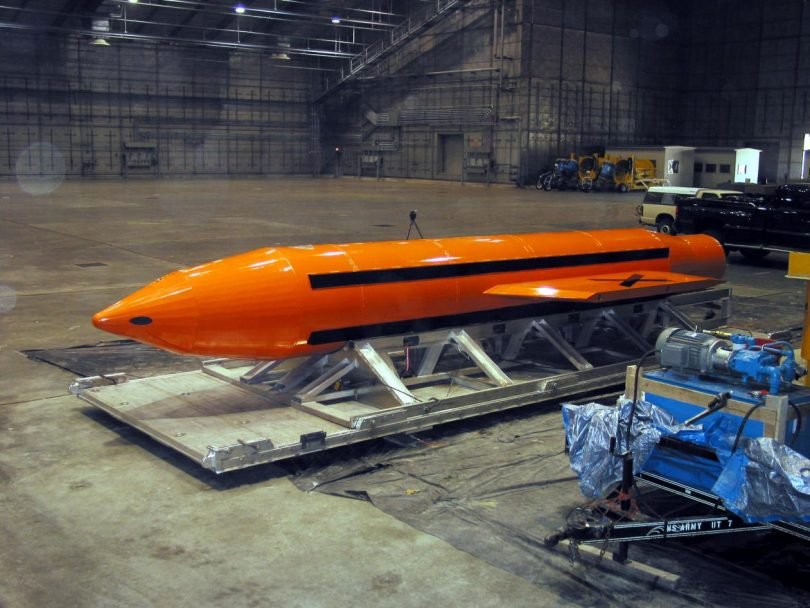 Last week, the US dropped its biggest bomb that is not a nuclear weapon for the first time in combat. The GBU-43B, known as MOAB, Massive Ordnance Air Blast, or as it has also been nicknamed the 'Mother of all Bombs' was launched by the Air Force in Nangarhar Province, in eastern Afghanistan.

The bomb is 30ft in length, weighs more than 10,000kg, carries over 8,000 kilograms of explosives and costs over $300 million (£239.4 million). It was targeting an underground tunnel system created and operated by ISIS in the Achin district.

The bomb has a blast radius of one mile in every direction and detonates just above the ground. Once discharged the device sucks all of the oxygen out of the area and turns the air to fire, making it quite the destructive device.

The weapon was tested as early as 2003 at a Florida air base and was then moved to Iraq to use as part of the 'shock and awe' strategy deployed by the Bush administration. The theory that Saddam Hussein's army would be so scared of the American fire power that they would surrender.

White House press secretary Sean Spicer briefed the Washington press corps about the attack but did not answer if President Trump had actually signed off on the order. He instead said that if any further details are needed, that reporters should be referred to the Department of Defence.

When POTUS was also asked about authorising the attack he said that he was "very proud" of his military. When pushed about the authorization he mumbled "errr everybody knows exactly what happened so and what I do is I authorize my military," once again not actually answering the question.

It seems that Trump has left any sort of authorisation that would normally fall to him, to the military. Perhaps he doesn't want to be bothered on the back nine.

Any sort of diplomatic fall-out would be left to be handled by an administration, that is hell-bent on sorting the worlds political tensions through military maneuvers and direct threats.

If Trump is allowing his military to carry out bombing raids and use weapons with the nickname 'mother of all bombs' without Presidential permission, then how far does military freedom go?

The NSA were given the freedom for daily operations before carrying out illegal surveillance on American citizens prior to being whistle blown by Edward Snowden.

It showed that a lack of oversight and regulation resulted in a direct overreach by a major government agency – something that we may have seen the start of in the military.

If we have, many more people, especially civilians, could be killed.