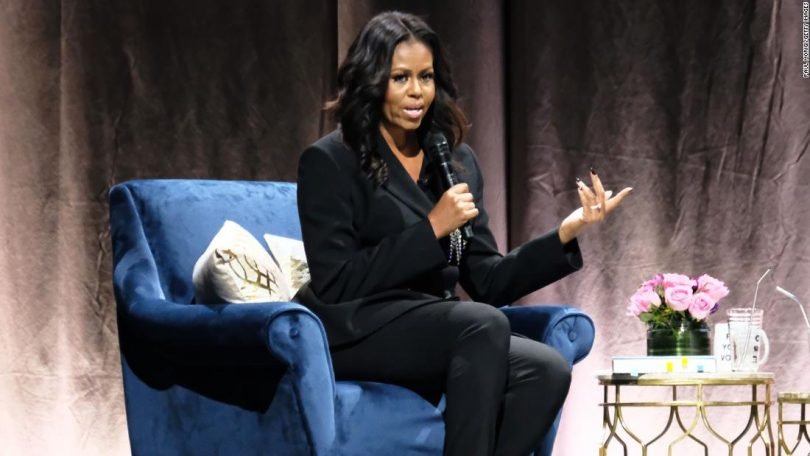 Michelle Obama, Former First Lady is an inspiration to many. She was born into a working class background in South-Side Chicago and used the curiosity that her parents instilled in her whilst growing up to become an exceptional academic achiever.

Historically, the First Lady’s role was to make her husband look good to the public in order to represent the family values and domestic aspect of the President. In past Presidency’s, The First Lady would be highly accommodating and be somewhat left in the background. Michelle has always been one to brake down barriers and it is clear of the level of partnership Barack and Michelle have in their marriage. Moreover, Michelle has independently navigated her own path and has always been engaged in projects that she has felt most passionate about.

Like many people, I for one have missed the Obama’s warm presence in our daily lives and her new memoir ‘Becoming’ was exactly what the world was craving. Michelle’s overriding theme of ‘staying strong’ is a continuation to her famous message of ‘when they go low, we go high’. The Obama’s made such an impact of moving forward from the moment Barack Obama’s won Presidency in 2008. In the book she spoke about her struggle in finding the right way for her to use her platform when she was First Lady and now her struggle once again as an influential role model today.

We’re finally here! I hope that this book might help each of you embrace the beauty of who you are, and I wish you all the best in your own process of becoming. https://t.co/tOEk59nT71 #IAmBecoming pic.twitter.com/1VD6nCZN41

One aspect of the book that caught people’s attention was her discussion of her personal life outside of politics and her life before The White House. She shares stories of her first kiss, smoking weed and her first ever meeting with her husband. She allows herself in her book to reflect upon her life and openly share her journey of growth with the public. Michelle resonates with so many women around the world: for example, she talks about miscarriage and IVF, as she speaks about such candid issues that are not often talked about amongst many women. This is instrumental, as does this to send the message to women that they are not alone. Michelle’s caring nature and thoughtfulness is so evident throughout the book. The book empowers women as she shows us what a strong woman looks like. By sharing her personal experiences she helps generate conversations that are often neglected in society today.

Interestingly, Michelle directly talks about the issues with Trump getting nominated despite her now distance stance towards politics. Michelle addresses the unforgivable ‘birther’ rumour about Barak Obama’s citizenship that Trump enthused and invigorated. The nature of that conspiracy that Trump deliberately started was labelled as ‘mean spirited’ and just one of many of Trump’s ‘reckless innuendos’ by the former First Lady and she is not wrong. Michelle explains her reason for this, as the conspiracy theory put her family’s lives under threat as it seriously jeopardised their safety. Despite openly critiquing the current President Michelle gives a justified reasons and allows readers to understand from her perspective. To me, this demonstrates Michelle’s family orientated values and her natural instinct to protect her family.

98 million adolescent girls around the world aren't in school. Laxmi was one of them—until she enrolled in the Prerna Girls School. That’s when her life changed.

I hope you'll support organizations making a difference for girls like Laxmi at https://t.co/Z5q8KOBrmF. pic.twitter.com/klNb6DRo1W

Michelle was amongst the masses in being shocked when Trump did actually get elected as President and writes that she still to this day wonders what led people to choose Trump over Clinton, a strong woman. Some may feel that Michelle should have not have been so critical of Trump, as a Former First Lady. However, she should be applauded for being honest as she shared her feelings about Trump, knowing that by speaking out she would be scrutinized. Her earnest view should be highly valued because it brings back to light the unconventional nature of Trump’s Presidency, which we are perhaps incrementally becoming accustomed to his absurd statements and actions. Our core values as citizens include kindness, compassion and respect, values that should not be dismissed as a result of a leader that portrays no such qualities. Hence, by Michelle criticising Trump she proves her point to bring back unity in the United States.

Michelle restores some hope in the people through her memoir and her TV interviews for her book tour; she upholds her message of strength and positivity towards the future. Even though she has explicitly stated she does not want to run for President, there is no doubt that she will continue to use her platform to do goodness with her grace.