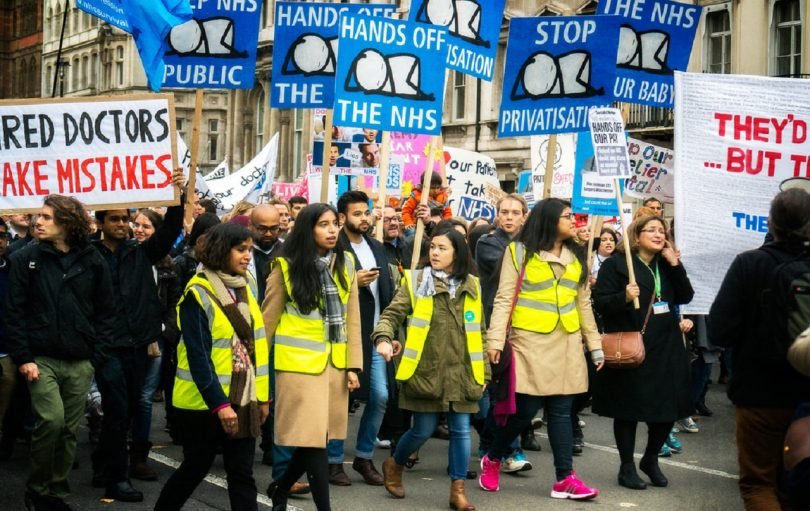 Sarah Sturrock had a simple goal when deciding what to pursue for a career – she wanted to help people, and a career in the medical profession would do just that.

Now, Sturrock, a fifth year medical student at Imperial College London, wonders if she will be able to accomplish that, amid the contract on junior doctors imposed by the government after negotiations with the British Medical Association broke down, at the end of a 24 hour junior doctors strike this week, as well as similar protests in London and other parts of England.

Sturrock attended a couple of the protests that took place. She says the fundamental reason why they’re being held is to ensure enough information is available for their case – similar to the need to give enough information to patients and their families over care.

Sturrock adds that these protests appeared to be the only way to express concern in a way that could be noticed by Health Secretary Jeremy Hunt, who she says has put politics over public safety.

“Doctors do not feel listened to by Jeremy Hunt, and many of us saw this as our only way to express our concern in a way that he would take notice of (although I must say that it doesn’t seem as though he has taken much notice!),” Sturrock said.

At issue in the contract was over pay on Saturdays. The government would offer a basic pay rise of 13.5 per cent, and offered extra pay after 5pm on Saturday, according to a report from the BBC. The BMA has said that it wants workers working all day on Saturday to be paid 50 per cent above the basic rate, the report adds.

Speaking on the floor of the House of Commons, Hunt said he took the advice to impose the contract after discussions with Sir David Dalton, the chief negotiator with the government, who said to do what was ultimately necessary to end the deadlock.

Hunt said that this contract would allow for safer services over the course of the week. Services in Scotland, Wales and Northern Ireland would not be affected by this contract. In an interview with Channel 4’s Jon Snow, Hunt said that what he wants is not different to what doctors in the NHS want.

Junior doctors who have participated in protests on the contract have said the government want to have 7 day NHS operations funded on only 5 days, and that it would compromise patient safety.

‘The fulfilment is incomparable’

Though she is focused on finishing her qualifications, due to be complete late next year, Sturrock says for her it comes down to patient safety, something she refuses to put at risk. As a result, should circumstances arise, she will move abroad.

“I love the NHS, I’m incredibly grateful for it and I’ve wanted to work in it ever since I decided to become a doctor, but I categorically will not put myself in a position of doing harm to my patients,” Sturrock said. “If it comes to a point where I have to choose between working unsafe hours for the NHS in England or moving abroad, I will move abroad. I cannot be part of a system that I believe will harm patients, as patients’ safety is always the priority.”

Sturrock says that these negotiations will deter students away from the profession, and that the government stands to lose generations of doctors if their concerns aren’t taken seriously.

“Many junior doctors have been frank with us, as students, and told us to keep our options open and consider alternative careers, or alternative countries to live in,” Sturrock said. “Morale is so incredibly low despite the continued (and very appreciated) support from patients and the public. Medicine will be unable to compete against working in the City or elsewhere in the private sector.”

In spite of all of it, and the distrust students have in Hunt, Sturrock would not have it any other way.

“Whilst my friends have graduated university and have been starting highly-paid jobs, going long-term travelling, considering getting on the property ladder or getting married, I have been ploughing away at a very long course on a student income for almost 5 years now – but I wouldn’t trade places with any of them.  The fulfilment I get from my course is incomparable to any salary or glamour that any other career could provide.”

Are you a medical student? What implications would these contract talks have on your goals? Do you think the NHS can be viable in the long term? Have your say in the comments section below.