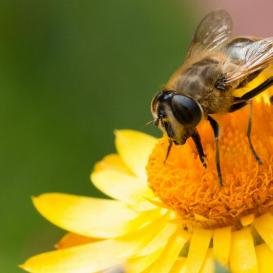 From a young age, I’ve been terrified of Bees. Not just a bit scared I’ll get stung or sensibly aware, but sheer primal terror. Some amygdalan response kicks in and my fight or flight sends me bolting at high speed, usually making noises like I’m about to vomit. My muscles will tense and I’ll see in tunnel vision. In my mind, there’s a singular threat, it’s hairy, it’s violent and it’s out to get me. It’s also ¾ inch long.

Yet, intellectually, I’m fine with bees. They’re kind of cute, with furry little backs and fuzzy bums. Compared to the hard-shelled beetle, the annoying daddy-long legs and the too-many-legged spider, they’re a veritable wonder.

Yet, something about the quick succession of yellow and black stripes on anything that buzzes and hovers creates an intense physical reaction.

The UK absolutely must not use bee-killing pesticides! If the bees go everything collapses. Plus wasps will think they’re all that #savebees

I blame wasps and hornets entirely for this melissophobia, their similarity in colour and general behaviour has caused me to give bees a bad rep in my brainbox. For many years wasps infiltrated my room, laid in wait in shoes and drawers waiting to strike. Yet, due to their stubborn and aggressive incessancy, I’d become so aware of them, I’ve never been stung.

One sting could end it all

Perhaps that’s a big part of my issue with bees. I’ve never been stung, so in some part of my mind I’m aware I could be allergic and one sting could end it all. Killed by a bee. Jesus, I’ve made myself really paranoid now and there’s a fly somewhere in this room buzzing in the distance trying to freak me out. I’M NOT FREAKING OUT FLY! I’M ABSOLUTELY FINE YOU PRICK!

Yet, more than likely it’s not. More than likely a bee won’t sting me unless I give it cause to. But there’s another issue, what is just cause to a bee? What’s the moral stance on violence to a bee? Relative to a bee, I’m a huge lumbering, unwieldy creature that could destroy his supply with a simple, misplaced step. The bee, distraught that his hive is now significantly at a loss due to my actions, kamikazes its arse in my general direction. As its stinger pierces my skin, its guts soldered to it stay with the stinger and as it flies away it kills itself. All because I took a single misstep.

I don’t trust myself not to anger a bee, don’t trust the bee not to get pissy and I don’t know if I can live with the guilt. So, I keep my distance. A mutual respect between me and the bee. We need bees to eat, to pollinate and to tell us when it’s summer time. They’re a marker of time and while their presence in a 3 metre radius makes me want to run into a lake, I’m a fan of them. My body disagrees, but my brain is all for bees.

Wasps though, they can fuck off.