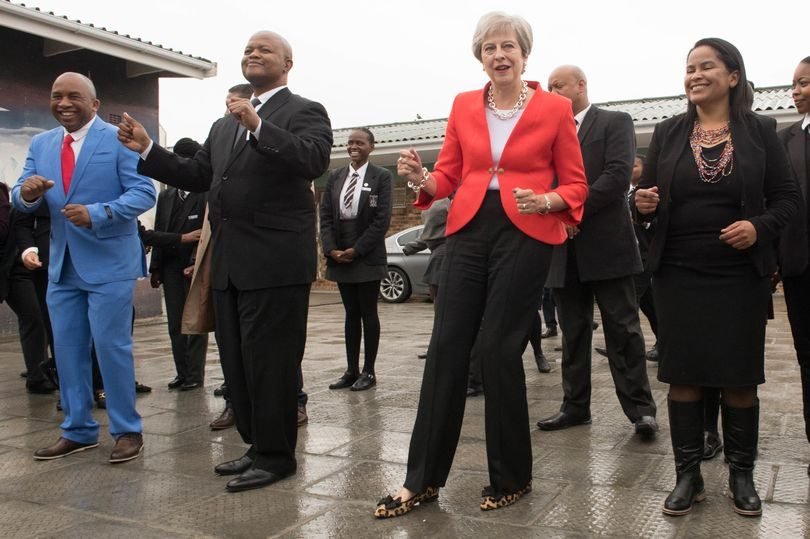 Last week, Mrs May paid a visit to South Africa, Nigeria, and Kenya – becoming the first Prime Minister to visit Africa since 2013 – to overcome Britain’s “decline in visibility in many parts of the continent” and consequently gain greater global influence after the UK leaves the European Union.

Flexing her “dance-floor diplomacy” amongst secondary school students in South Africa, Theresa May waltzed her way to offering the establishment of business ties worth more than $5 billion alongside the continuation of 0.7 per cent of the UK’s GDP to aid relief. Not only would this support African markets, but also promote Britain to become Africa’s largest investor by 2022, pushing the United States off the pedestal.

Theresa May has her dancing shoes on at a school in South Africa. https://t.co/zWUWhS7Rwj Via @ReutersTV pic.twitter.com/gXN9ZgYrM5

Marketing what Britain has to offer, May stated in her speech in Cape Town:

“A driving focus of our development programme will be to ensure that governments in Africa have the environment, knowledge, institutions and support to attract sustainable, long-term investments in the future of Africa and Africans”.

“I can today announce an additional £4 billion programme of UK investment in African economies that will pave the way for at least another £4 billion of private sector financing.”

“This includes, for the first time, an ambition from the UK government’s Development Finance Institution, CDC, to invest £3.5 billion in African nations over the next four years. And next year London will host an Africa Investment Summit, helping investors and African governments forge closer ties with one another.”

“And because markets and economies need people as well as capital, we will also be sharing our expertise – supporting partner countries in developing their business environments and institutions, integrating into global value chains, building ties with investors and tackling barriers to growth.”

Whilst this seems convincing, Her Majesty’s Government may not seal a deal so effortlessly. Germany’s Mrs Merkel also made her way to Africa, visiting Senegal, Ghana, and Nigeria to chase her own 2017 policy, mimicking Britain’s objectives, to: catalyse economic growth, fight poverty, and reduce unemployment. Furthermore, we mustn’t forget for the last nine consecutive years, China has remained Africa’s biggest trading partner, with around 10,000 firms entrenched within the land of the Sahara.
Despite these challenges, this was not May’s largest obstacle.

An interview with Channel 4 correspondent Michael Crick identified a major hypocrisy, urging the prime minister to admit her position on apartheid during the 1970s and 1980s.

"I think you know full well I didn’t go on protests."@Theresa_May is questioned by @MichaelLCrick about her stance on apartheid ahead of her visit to Robben Island, where Mandela was imprisoned. pic.twitter.com/YLM6DiQQR1

In spite of her pro-apartheid comments during her speech in Cape Town, saying how “unjustly” prisoners on Robben Island – including Nelson Mandela – were treated for “dreaming of a country in which the colour of your skin made no difference to your rights and opportunities”, “tetchy May” refused to respond to Crick, when he aggressively asked: “Did you boycott South African goods? Did you do anything?”

Under fire, Theresa May repeated her circumlocution, expressing her support for “the work that the United Kingdom government did to ensure that it did give support where that support was needed”.
Will the media’s capitalisation of this possible hypocrisy jeopardise Britain’s modern-day scramble for Africa? The ramifications of this ideological inconsistency will be known in due time, especially once the UK officially leaves the EU in March 2019.