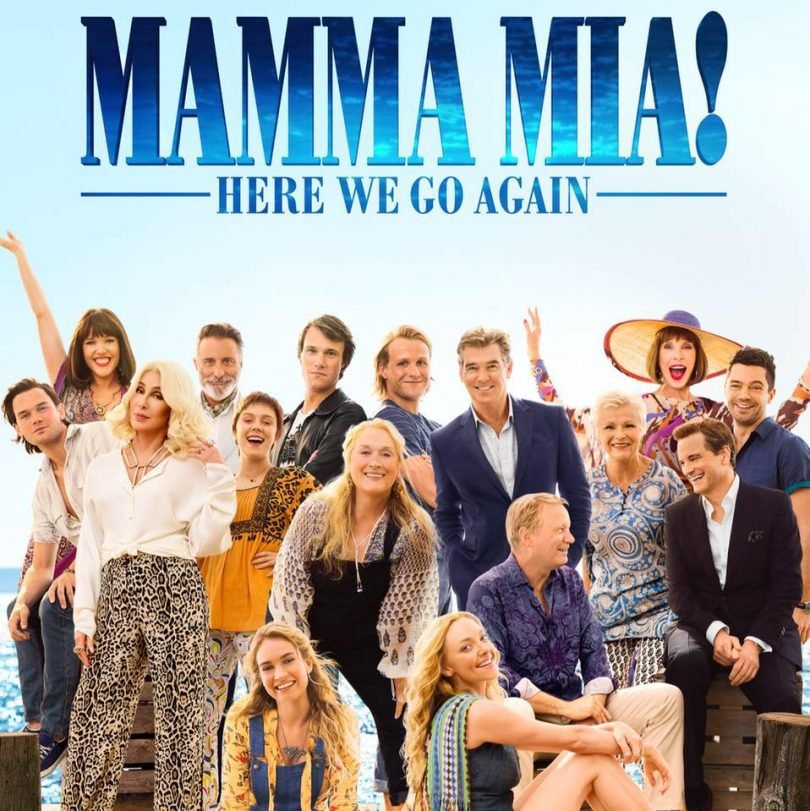 Ten years after we poured out of cinemas completely wrecked with emotion – still thrilled by the antics of Meryl Streep and her sidekicks Julie Walters and Christine Baranksi, and left cringing every time Pierce Brosnan burst into song – it is time to grab the popcorn (and tissues) again. The Mamma Mia all-star cast are back to whisk us away on another vacay to whitewashed beaches and azure skies, sound tracked by even more ABBA hits.

The sequel-yet-prequel takes us back to the balmy, carefree summer of 1979. A young Donna, brought to life by the delightful Lily James, graduates in style by treating her cohort to a raunchy rendition of ‘When I Kissed the Teacher’.

Directed by Ol Parker, the mind behind feel-good comedy-drama The Best Exotic Marigold Hotel, the film establishes its credentials early as the first musical number is inarguably a cinematic masterpiece. James establishes herself as the Ms Sheridan early, complete with Meryl Streep characteristics and mannerisms. Her sidekicks of Rosie Mulligan and Tanya Chesham-Leigh are brought to life by the fantastic Alexa Davies and the effortlessly glam Jessica Keenan Wynn.

The opening scene is so jam-packed with action that it is hard to believe that less than five minutes have passed by the end of it. From Lily James’ high-octane performance to her fellow graduands to Celia Imrie giving her best Minerva McGonigle impression, the long-awaited feature got off to a flying start.

“I just want to be upfront and say that I visually enjoy you” – young Tanya, as subtle as a brick through a blue-and-white-shuttered window.

While Lily James stood out as a perfect match for the flashback scenes, the casting of young Donna’s love interests was also a massive success for the film. Hugh Skinner’s sensitive, considerate Harry Bright is the perfect prelude to Colin Firth’s high-flying banker. Jeremy Irvine effortlessly exudes the confidence and smouldering broodiness of his future Pierce Brosnan self. Last but most certainly not least, blonde and bronzed Josh Dylan beautifully captivates the carefree Swedish Poseidon that is Bill Anderson, played in the present day by Stellan Skårsgard.

For all the casting triumphs, you would not be blamed for feeling as though something was missing in the sequel. The lens (and microphone) was firmly on lesser-known Abba B-sides rather than the chart-toppers made for belting out with reckless abandon.

Somehow, the paring back of the soundtrack worked. It fleshed out the story beautifully and added credence and brevity to the plot. It shone a blinding light on the contrast between our protagonist’s former and current life, and emphasised the Dynamos’ journey from youthful college graduates to glittering girl band. Twentysomething Donnas sing Andante, Andante to their two best friends in empty tavernas. Older, wiser, worldly Donnas belt out Super Trouper in a stunning hotel bursting with guests. While the years advance, and fashions change (though not by much for the 70s fanatics), those two best friends remain firmly by her side.

One of the most anticipated film cameos ever, Cher’s appearance as Sophie’s grandma was certainly worth the wait. While she is clearly a massive star, there was a worry that the film would become focused on the Hollywood name. It was refreshing, then, to see that her role was very much secondary. The glamorous granny definitely made a show-stopping arrival in her private Chopper, but there was no beeline made for her – with Sophie shading her commitment to family, and Sky ensuring she knows her place.

While the decision to kill off our beloved Donna was bold, it allowed for some of the most touching scenes in cinema. It came as a disappointment that we would not see the dream team that is Streep, Baranski and Walters putting the world to rights over a cocktail or three and growing old disgracefully. What we were treated to instead, though, were beautiful scenes of an ethereal Donna guiding Sophie as she treads the same path her mother created decades before her.

Mamma Mia! Here We Go Again is an emotional rollercoaster I did not want to end. That Richard Curtis was co-writer for the film team is no surprise – the man who brought us Love, Actually and Notting Hill knows just how to break our hearts only to put them back together and fill them with warmth. Ridiculously feelgood, endlessly entertaining and just downright fun, it must be seen to be believed. Just take tissues. Many, many tissues.