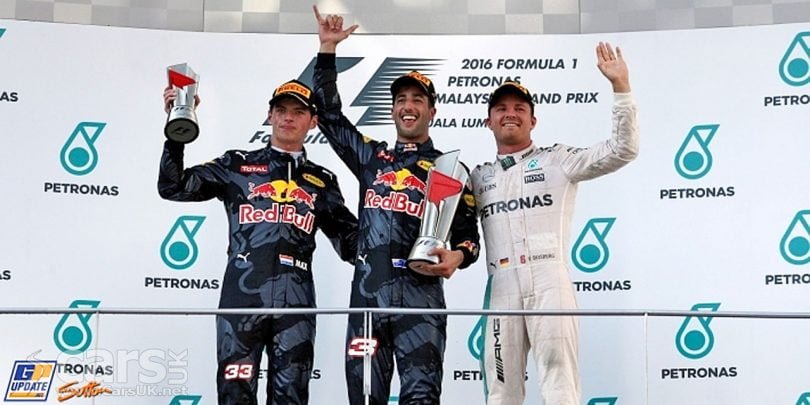 An engine blow-up for Lewis Hamilton handed Daniel Ricciardo a first win of the season at Sunday's Malaysian Grand Prix. Hamilton was leading the race by over twenty seconds when smoke and fire emerged from his Mercedes just fifteen laps from the end of the race.

Ricciardo could count himself lucky after a fierce battle earlier on in the race kept himself ahead of his teenage teammate which could have decided the outcome of the race. Despite Verstappen asking to be let passed the eventual winner Ricciardo with Verstappen at the time running on newer tyres.

The start of the race was frantic with Vettel's afternoon lasting no more than three corners. The German attempted an ambitious move on the inside of Turn 1. Vettel collided with Nico Rosberg which sent the Mercedes driver and championship leader in a spin and to the back of the pack.

Whilst Rosberg was able to recover to the podium, Vettel was forced to retire much to the amusement of Max Verstappen who said on the radio "Sebastian (Vettel) is crazy… he went into Rosberg like an idiot".

Whilst the pack was running under normal conditions it was clear that Lewis Hamilton had the pace to cruise home to an easy and important win. With Rosberg being out of contention it was looking like the perfect weekend for Hamilton to dominated qualifying on Saturday.

After starting in last place thanks to a 45-place grid penalty after yet more problems with his Honda power unit, Fernando Alonso managed to score points in his McLaren after a long battle with Nico Hulkenberg and teammate Jenson Button who celebrated his 300th grand prix in Malaysia.

Amidst the chaos in front which included a brake failure for Roman Grosjean, Rosberg was able to carve his way back through the pack. After breezing through the tail end of the field, Rosberg needed to get his elbows out if he was going to make the most of Hamilton's misfortune.

Rosberg was catching Kimi Raikkonen but he knew it would not be easy to pass the Finn who is having his best season since returning to Ferrari. Rosberg barged his way passed Raikkonen at Turn 1 which resulted in the championship leader being slapped with a 10-second time penalty.

ROS forces his way past RAI to take P4 – but not without tagging the Ferrari man's front wing on his way #MalaysiaGP pic.twitter.com/AMaFFX56r7

Verstappen finished just over two seconds behind Ricciardo who took claimed his first win in two years. Elsewhere, Jolyon Palmer scored his first point in F1 after a tenth-placed finish behind Jenson Button in ninth.

This weekend F1 heads to the classic Suzuka Circuit in Japan with Lewis Hamilton knowing that a win on Sunday is vital.