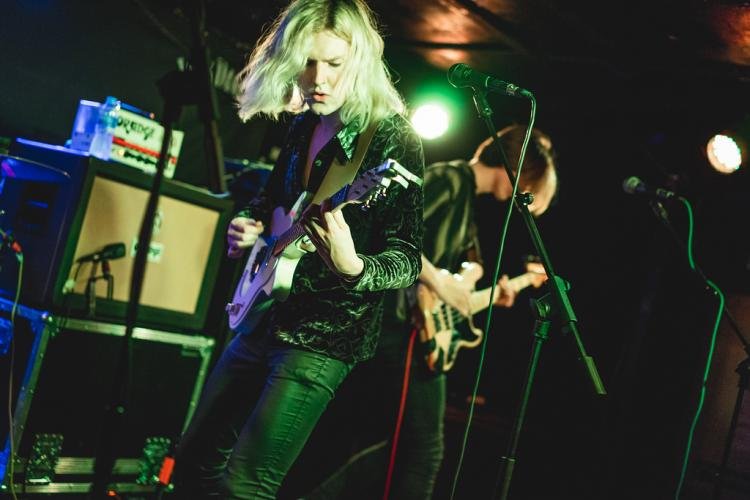 Upon arriving at The Cluny, you would be excused for wondering if you arrived at the correct music venue. It is set in old warehouses on the outskirts of Newcastle City Centre, at the bottom of a large hill. Through the main doors, we walked past the main bar and kitchen, where it was thriving with people enjoying food and drinks on a cloudy and windy Wednesday evening. At the back of the original room is a small door next to the toilets, which leads to the unusual music room. Upon entering, a small bar is to the right with some draught beers and ciders alongside bottles and cans. A can of Red Stripe was £3.60. To the left, down a set of stairs is a large pit area looking onto the stage.

By the time we arrived there was already a substantial atmosphere and the place was buzzing. It was a young, Adidas-wearing audience, and most looked like they were enjoying the half-term holidays. For a small audience, the amount of noise created an energetic air around the room and the excitement for our lively four-piece from Reading was rising.

Support act INHEAVEN confidently took centre stage. Bassist Chloe was quick to instantiate what she desired from the crowd with some uplifting words. The South London quartet certainly did not take long to get the fresh crowd moving. Very much alike Sundara Karma with their edgy, baggy, patterned shirts and medium-long hair, they found themselves performing to a barricade of restless teenagers.

The indie rock performers enjoyed seeing the crowd create a considerable mosh pit (in the pit.) A lot of the crowd had obviously given the group of hipster rockers a chance before coming to the gig. The band’s most popular songs – ‘Regeneration’ and ‘Baby’s Alright’ ­– received a considerable amount of positive feedback from the spectators. The lead singer noticed the crowd’s devotion to his songs and asked the audience how many knew them; to which the majority of the audience cheered. Their popularity and catchy tunes surely make them destined for bigger things.

After a wearisome 30 minute soundcheck, a huge roar from the female members of the audience signalled the arrival of frontman Oscar Lulu and his troop. Subsequent to familiarising themselves with the stage and their guitar straps, the four-piece blasted out their most popular single ‘A Young Understanding’. This was met with a huge rendition from the crowd and a few circle pits filled with drunken youths to go along with it.

The energetic set list continued with ‘Vivienne’, ‘Diamond Cutter’ and ‘Run Away’. The pit-like venue was soon engulfed by moshing and the band were highly aware of their effect on the crowd, enjoying watching us as much as we did them. Those who chose not to mosh at the front watched from a vantage point to the right, but they still could not resist moving along to the indie, arena-bound tunes. The age of the audience was confirmed when lead singer Lulu questioned the amount of exams left for those in it, which was met by a huge roar. This was met by thanks from him, which the crowd loved.

Between the popular tunes came a number of renditions of their new material. One of which, ‘Olympia’ received a positive reception from the crowd, with some yelling out the lyrics after just a verse. The new songs did not stop the moshing either, and the fact that there was still movement in the crowd when no one knew them is inevitably a great sign for their future tracks. According to lead singer Lulu, we can expect the new album after the summer.

The best-received song of the evening went to ‘Flame’. The noise created from the crowd almost matched the noise created by the four-piece’s frontman. The performance from the South London band certainly deserved a welcoming stage dive, to which Lulu, in his barely-buttoned yellow/gold snakeskin shirt, took advantage of. This produced even more atmosphere amongst the onlookers and spurred on a few more energetic performances before they left the stage.

Obviously they were not in a position to leave us hanging, and it would have been all but cruel to do so. After an exit of around 20 seconds the indie-rock quartet returned, entering an atmosphere which you could cut with a blunt spoon. The wall of sound created from the joy of the audience must have filled them with self-confidence and Lulu announced that they had “a couple more songs”. Indeed they did, and a flawless performance of ‘The Night’ was next on the setlist.

Lastly, but the absolute polar opposite of least, was their tour track ‘Loveblood’. No difficulties with this song, it is a track which is bigger than its boots with enough noise and upbeat guitar jangles to wake the dead, and the live performance matched this. The band have recently released a video for this and it will surely make it onto the debut album. Ending on this tipped off a magnificent evening in the company of a very promising set of lads from Reading. Sundara Karma left the stage with the adoration of each person in the crowd in their pockets and they got a well-deserved roar of approval.

A fantastic, restless, ear-deafening set from a very promising young band with a stack of potential behind them. The venue and support act were perfectly picked and complemented the lads well. That being said, it will be no surprise to see Sundara Karma in bigger venues very soon, at which I, and others, will be sure to be attending. You can catch them at Reading, Leeds, Kendal Calling and Y Not Festival this summer. If you are there, don’t miss out!

Worsts: Age of the crowd is one slight nit-picky negative, but this is truly clutching at straws.

Are you a fan of Sundara Karma? Let us know in the comments below!