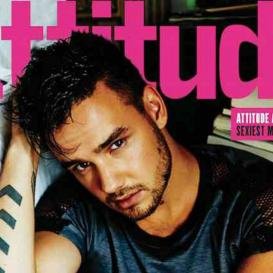 Liam Payne, the One Direction singer and tween heartthrob, is the current coverstar for gay magazine, Attitude. Taking to twitter in September Liam broke the news to his fans with a cheeky sneakpeak of one of two front covers.

As they’ve got one of the biggest and most popular boyband members on the planet, Attitude has released two different covers, which they say are collectible.

“It’s the first solo shoot and interview any of the members of One Direction have done, their first gay press shoot and I think the only magazine promo for their new album. The news that the band are taking a hiatus or splitting up, whichever version you believe, means that this story should be global news and I’ll be surprised if it doesn’t become our biggest-selling issue ever.”

However this all comes in the wake of allegations Liam has been homophobic whist on stage, something which he denied at the time. As well as his tweets to Willie Robertson, from Duck Dynasty, who at the time was in the news for his support of his father’s homophobic comments.

Liam addresses the allegations of homphobia that have been made against him, saying:

“Of course it upsets me that people believe that, because I know I am not [homophobic]”

As well as addressing the allegations he’s gay, Liam also addresses fan conspiracy theorists that say Louis and Harry are in a secret homosexual relationship. Talking about the so called ‘Larry Stylinson’ conspiracy, Liam says:

“It becomes like a conspiracy or like a cult, the people who watch them and think that every move they make is a gesture towards them being together, and I know it’s not true and it makes me mad.”

Larry Stylinson is real: Louis Tomlinson and Harry Styles are in fact in love with eachother https://t.co/XR5Xb7mNSg

In addition to being Attitude’s cover star, Liam has also won Attitude’s ‘Sexiest Man of The Year’ award. Something which he describes as a ‘shock’, saying:

“It’s a shock but I am very thankful to those who think I deserve this. It’s a great title to have.”

In this world exclusive interview, which is also his first ever solo interview, Liam also talks about his former heavy drinking issue, the departure of member Zayn Malik, and the explicit and sometimies unusual fan fiction the band recieves. On the whole it’s a very revealing interview in which Liam addresses things he hasn’t prieviously, doing so openly and without holding back.

Liam’s edition is currently out now.