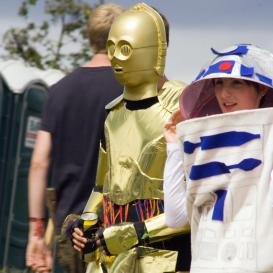 This year 2000trees is giving people the options to decide what the theme will be for this year’s festival fancy dress and all you have to do is visit the Facebook page and give them your suggestions. It couldn’t be easier.

Of course if you aren’t feeling inspired, there’s always the opportunity to vote for a theme that a fellow festival-goer has already put forward. And there are some pretty kooky ones. Amongst ideas so far are suggestions like, Childhood toys (who hasn’t dreamt of being a hungry hippo?), Trees, Wrestlers, 90s movies, Coronation Street and fittingly, On the Farm.

Want to have your say on the fancy dress theme? Vote now on Facebook then innit https://t.co/PUpmX9okx6 80s movies in the lead at the mo

Think you can do better? Get over to Facebook and suggest one of your own at https://www.facebook.com/2000trees?fref=ts

So who is playing when?

The considerate crew at 2000trees have kindly eased your confusion of which bands are playing when. You might not need this now but after a few Badgers Bottoms on Thursday night this will come in handy. So check out, where and when your favourite band will be.

Watch The Band of The Week

Of course it’s 2000trees so the interaction doesn’t stop there. While you are waiting for July to arrive why not check out the Band of the Week? Each Wednesday you can watch videos of bands selected each week on the official site and indulge in some audio visual treats of what is in store.

This weeks band is Allusondrugs, a five-piece alternative rock band.

As you can see from the line up – why would you want to be anywhere else this summer?

Not got your ticket yet? Be quick! There are tickets still available so hop over to the website. If you can only spare one day in your summer there are a few day tickets still up for grabs. 2000trees is the place to be this summer, dressed as a hungry hippo or even Gail Platt! The choice is yours.