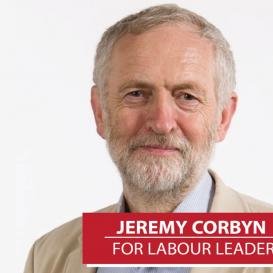 After having entered the leadership race at 100/1, bookmakers Ladbrokes have slashed his odds to 6/4. Now also the favourite amongst Labour Party members, it looks like the bookies were too quick to back the wrong horse.

Corbyn has been criticised for being “too socialist” and his manifesto has led to comparisons to Karl Marx. The phrase ‘left-wing’ is thrown at Jeremy in a derogatory way from several media sources. Perhaps this is because he has extremely radical ideas, such as… equality. Have we become so accustomed to a Tory government that we reject anything that is remotely more left-wing, and fair?

The 66-year-old had humble beginnings as the son of an electrical engineer and a maths teacher.  The anti-poverty campaigner is seen as one of the most rebellious Members of Parliament, going against his own party more than 500 times. Voting against some of the most controversial issues of the Blair years, including the Iraq War and the increase of tuition fees, Corbyn is the socialist leader that could change the tradition of the Oxbridge elite.

Jeremy Corbyn has not only divided the country’s media- The Telegraph suggested its readers become registered members so they can vote for him and “destroy the Labour Party”- former Labour leaders have also been quick to criticise him, namely Neil Kinnock and Tony Blair. Thankfully, I don’t think that Jeremy is losing much sleep over not having the support of oh-so-popular Blair.

On Monday morning, the hashtag #IfJeremyCorbynWins started trending on Twitter. Knowing that Twitter is the home of sarcastic trending topics, I feared that it would list a number of reasons why Corbyn would be, in The Telegraph’s words, “unthinkably bad for the UK.” Instead, it was largely the opposite, offering a great insight into what many young people think of the prospective leader.

#IfJeremyCorbynWins ‘it will show that democracy DOES exist and the people do have a voice’ http://t.co/1KkCbCseEa pic.twitter.com/vpNEIit7Tm

#IfJeremyCorbynWins my faith will be restored that for ONCE, people are capable of voting for ideas and beliefs, not tactics.

#IfJeremyCorbynWins it will be a beacon of hope for those living in fear of the consequences of some of the nastiest Tory policies ever.

The love that Labour’s lost

Time and time again the Labour Party are branded as still being a party of Blairites.  This is not the 1990s- Labour will never have another Tony Blair; the issues facing the country are not the same as 20 years ago. Besides, any leader will have learnt from his mistakes.

The Labour Party grew out of the trade union movement and socialist parties of the nineteenth century. In recent years, Labour have failed to establish themselves as a credible alternative to the right-wing Conservatives. Jeremy Corbyn, with the assistance of a strong cabinet, could be the one to win the support of the public in time for the 2020 general election.

Corbyn’s ideologies are attractive options to anyone who feels let down by the Conservative government. So, most of the British population. Against austerity, tuition fees and the welfare bill, Jeremy stands for a real living wage, renationalising the railways and ending poverty. Some of Jeremy’s supporters include Shadow Minister for Public Health Diane Abbott and Labour MP for Hayes and Harlington, John McDonnell. He is also backed by trade union Unite, the largest in the Britain.

Hopeful Jeremy Corbyn wants to rebuild the Labour Party and become a “rejuvenated, democratic mass social movement again dedicated to bringing about real change.” With the support already shown for him, he might get to do just that.