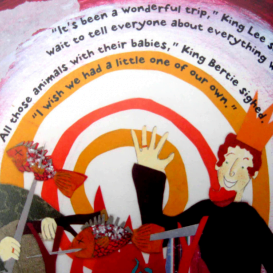 Hands up who thought we were trying to raise our children in an age of equality? …and hands down.

I was absolutely outraged by a report I read at the guardian.com about a third-grade teacher at a school in North Carolina, who resigned after taking the decision to read a same-sex fairy tale to his class. Omar Currie and the assistant principal, Meg Goodhand, who allegedly loaned the book to Mr Currie, were met with a ‘parental backlash’ over the reading and have stood down. I don’t know Mr Currie or his ability to teach, but the fact that he read the story in an effort to teach the children a lesson in tolerance must speak volumes about his ability to do his job.

Apparently a pupil had come to Mr Currie in tears following taunting from his classmates who called him “gay” as an insult. To bring subjects to the fore through literacy is a long established method in schools and why should this subject be any different? According to the Guardian, Mr Currie said, “In that moment it just seemed natural to me to read the book and have a conversation about treating people with respect. My focus then was on the child, and helping the child.”

King & King tells the story of a young prince whose mother wants him to marry so she can retire as Queen. He tells her he has no interest in the princesses she parades in front of him. One of them then arrives with her brother and his heart is captured. The two princes marry and they all live happily ever after – “The Queen even shed a tear or two” – in happiness I hasten to add.

Now, had this been a traditional fairy tale (and we can but hope that in future it will be considered as such) I suspect that not one parent would raise a murmer. It’s alright to have a prince meet a princess, fall in love and live happily ever after because that is what we have brought our children up to believe for years. And yes, it does happen  – on a simplified level. But wake up American and, no doubt, other parents – princes fall in love with princes and likewise princesses with princesses. Times are a changing! (I can see some justification in getting angry at the traditional endings for all these tales because  ‘happy ever after’ can be a fallacy for some; but these are tales, fables, simplified to enable stories to reach out to the young, so I’m not even going down that argument.)

Third grade pupils are aged 8-9 years, well used to having ‘traditional’ fairy tales read to them so I cannot understand the problem. If society is serious about gay equality then surely this is the sort of story every class should be hearing. I’ve seen extracts from the book. There is nothing sexually explicit, just a tale of love and happiness seemingly told in a humorous tale.

“When I was your age,” says the Queen, “I’d been married twice already.”

The prince describes one princess as having long arms, “that will come in handy when waving to the people.”

Massresistance.org, a group with the tag line, ‘pro family activism that makes a difference’ report on the book, which has been in publication since 2002. “As you can see, it is clearly written to normalise homosexual romance and “marriage” in the minds of very young children.” So? Your point is exactly? These young children are growing up in a society where this is normal. Why on earth would you try and divide gay and straight love? Perhaps they should change their tag line to “We want to make people different.”

@SChenHayes @EducateCelebrat @Carolina_FOZ.King and King belongs in every elementary classroom and on #schoolcounseling shelves!! Carry On!

After Mr Currie had read the story, parents of three of his class had ‘filed written complaints’ to a review committee that had previously decided twice before that the book could be used in the classroom. However following these complaints the principal of Efland-Cheeks Elementary School has ordered a new policy that ‘would require teachers to notify parents in advance of the books they intend to read in the classroom.’

Having worked in schools for fifteen years I am outraged by this. There are times during the school day, following a situation, where the class need to be made aware of other’s needs. What better way than to introduce the topic through a story, professionally written for just that purpose? Many a wise teacher I have worked alongside has a stack of such books at their finger-tips to help convey pupils feelings and needs.It gives an opportunity for children to talk about their feelings and ask about others. Children are receptive to this and it works wonders. How can parents be so blind and narrow minded when it comes to needs of others, or indeed their own children? I wonder how many parents who agree with this new policy of vetting stories, allow their children to look at films, computer games etc that are over the age range for their little ‘prince and princesses’? Does it ever occur to them the damage that this brings into the classroom? Here’s one for equality: why not allow the teachers to police what the parents should be allowing their children to watch way after bedtime?

What a happier place the classroom would be if that were to happen.