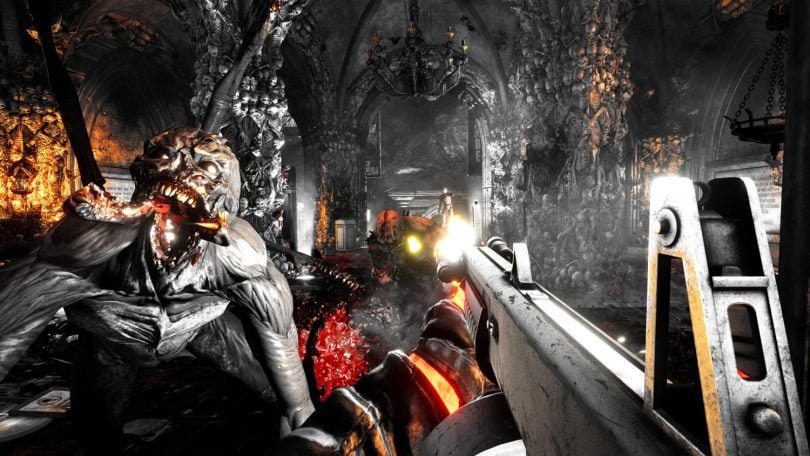 Killing Floor 2 is carnage incarnate. It’s time to get down and enjoy a slick, fast-paced, and chaotic co-op shooter. The simple premise of slaughtering a shit ton of zeds (not zombies) while playing alongside your friends is precise and finely executed in this title.

The journey out of Early Access for Killing Floor 2 has been a fairly comfortable one. It made its debut on Steam’s Early Access program in April 2015 and since then has maintained overall positive reviews from Steam users. The game released now, however, has declined in popularity through the Early Access process. September 2015 was when it peaked at 24,113 concurrent players were as this month it only reached 7,075 at peak. For the game to lose players at such a rate leading up to and following release but still maintain good reviews from its player base, suggests to me that Killing Floor 2 as a game is a refined game that has developed a niche and cult following. It’s worth noting that on average only a quarter of the games that go through the Early Access process receive a full release, for a smaller studio such as Tripwire Interactive this is nothing short of an impressive feat. My personal experience with the game was one of mildly contained enjoyment. The first session playing this game will be one filled with awe, the visuals decent enough but where this game really shines is the gore. There was enough blood to give Enoch Powell a hard on and I loved it. The class variation was solid (known as Perks), I certainly felt each one had unique enough abilities that there was some planning that had to go into a team comp and how to deal with the various hordes of zeds that get thrown at you. After the initial glee at the endless unfiltered slaughter the game provides, there is a moment of realisation. This is when the repetitive nature of the game hits you, despite the great variation of Perks, Specimens, Weapons, and Maps it is ultimately the games punctual delivery of a very simple game genre that is its biggest weakness. There aren’t many places you can go with such a simple process and if there were different routes to go down Killing Floor 2 doesn’t go there.

Killing Floor 2 is an absolutely smashing gorefest that should be in every group of friends ‘to play list’. I’d recommend it. What it lacks in depth perhaps can be replaced by the enjoyment of the company you keep while you play it.

Reviewer Rating: 4 out of 5