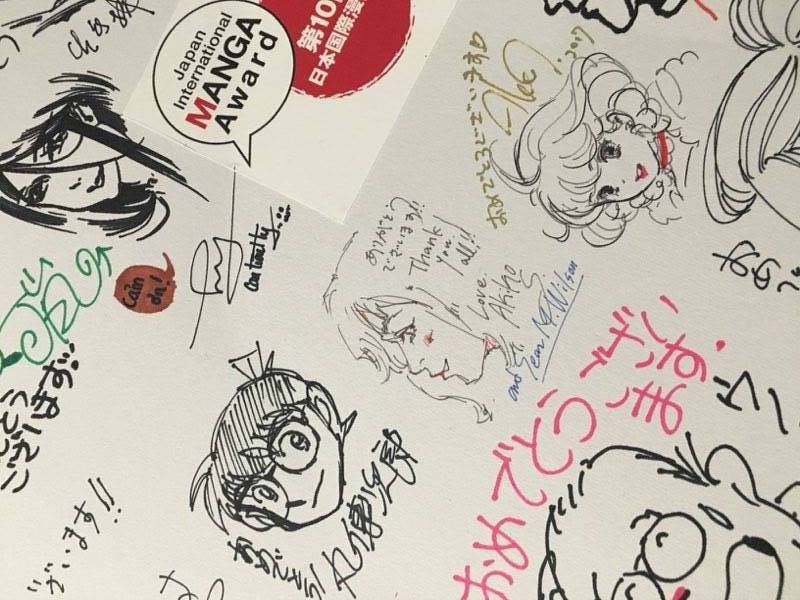 That means "My name is Sean Michael Wilson and I am a British comic book writer living in Japan," to you and me.

Sean is a master of his craft in the land of comic creativity – Japan. More specifically, Kumamoto on the southern island. Originally from Edinburgh, he is the first Brit to win a prestigious medal in the Japanese Ministry of Foreign Affairs International Manga Awards.

Try telling Sean that his work (over twenty books, by the way) is a cute collection of cartoons and he would strongly disagree. Quite right, too, as in my opinion quality comic books should be artistically revered in the same way as movies, books and artwork. He seeks to make an impact; a sense of social justice, activism and ‘feeling woke’ seep deeply into the pages. His newest book, Portraits of Violence, is described as ‘an illustrated history of radical thinking’ on his website. 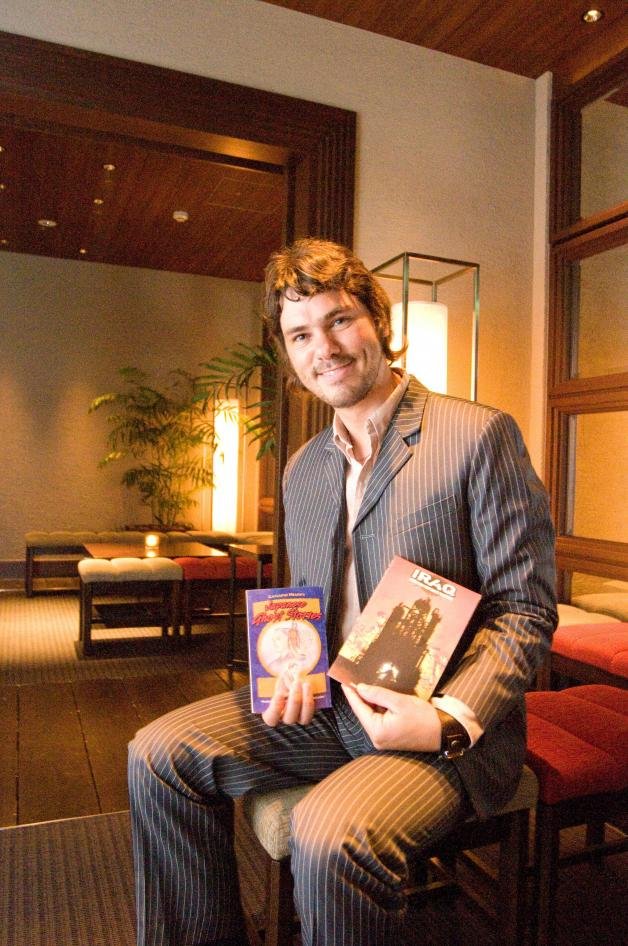 So Sean, when did your comic book writing career begin?

Well it began in my heart when I was 12 years old. I went into a shop in Morningside, which was still a newsagent until a couple years ago I think. I was looking for an old British comic book which doesn’t exist anymore and it was sold out so I was disappointed. Then another one caught my eye in the corner and it was 2000 AD [by Alan Moore, John Wagner and more]. It has such an interesting cover on it, it was odd. I took it home and that was really a eureka! moment for me because I realised that comic books were actually not just for kids. First of all, I was just very interested in the stories but as they were more mature style stuff, I actually realised that you could continue to do comics as an adult on sophisticated themes.

And it was a good time because comic books were really blossoming in their maturity and sophistication – very intelligent and moving stuff. [They’re] as good as any novel, as any movie. I thought ‘this is what I want to do.’ And so I  fell in love with that and decided that’s what I want to do. It was really a kind of childhood or teenage dream which I never shook off. So that’s the centre of it for me.

A nice wee mention of our Portraits of Violence book in February's issue of The Psychologist pic.twitter.com/L1UKRzOu2W

How did you get your first comic book published?

"Money is the key thing which holds all those things back. It’s not ideas. There’s no shortage of ideas."

Then when I came to London, I studied film making. We had a bit of success in that, we got a film on Channel 4. The thing about film making is… when I was in London, the centre for film making obviously, I started to get disenfranchised with some of the negative elements of the industry. I started to think that the comic books were in a way the purer artistic form. The money element is a bit less dominant than it is in films and movies where you often need to make millions of pounds or millions of dollars. But with comic books, you only have to make, say, ten thousand pounds or something like that for it to be in profit. As it’s much less, there’s more room for the artistic element to grow.

And so, because I was a little bit disenfranchised with film making, I thought, ‘Alright, I’m going to go back to my first love. Comics.’ I didn’t do that until I was, er, 30. So it was already a little bit late in the day to start that.

I decided to give up something that would have made me more money so to concentrate on something which I love. So what happened was, my first book was published really by luck. I applied for an Arts Council grant thinking that they would maybe just get me £300 or £400 or something and to my surprise, they gave me about ten times that. I said ‘Ok, I’m really going to grasp this chance to do comics and not focus on films anymore.’ I had the chance to print it professionally, distribute it professionally and pay an artist to really do it well. It took off from there.

Our SECRETS OF THE NINJA book award from the Japanese Ministry of Foreign Affairs pic.twitter.com/hchW1oNhnA

So what keeps you creative?

Well, that’s no problem at all for me actually. I think many think that way but it’s not a question of writer’s block or where you come up with ideas, there’s no shortage of ideas. What we have a shortage of is money. Money is the key thing which holds back art in films, documentaries, comics, poetry, everything, journalism too. Money is the key thing which holds all those things back. It’s not ideas. There’s no shortage of ideas. So I’ve never had any problem coming up with interesting things to write about. The only problem is converting those ideas into something which a publisher will support because they think there will be enough sales in it.

That’s the barrier. Ideas, I’ve got millions of.

Our lovely book Portraits of Violence is listed in this impressive bunch at City Lights: https://t.co/fQzt7w1WZb

Where do you get your ideas from?

Well creative people, in one way or another, are often asked this question. It’s an overused question but a very important question. Alan Moore came up with this idea that very creative ideas spark off at a cross point between your personal experience and your artistic influences. If you can imagine a line of artistic influences coming from the right and the line of personal experiences coming from the left, the point where they spark off each other is where ideas come from. I think that is a good a definition as any.

So when you’re looking at a good film, a good documentary film, that’s an artistic influence and you think, ‘Oh, I’d like to do something as cool as that’ or something as interesting or beautiful. You then take elements of your personal experience and in some way blend the two together.

What is the best thing about living in Japan?

The thing about Japan is that it’s very much different from people’s image of it. People think of it as a very high tech country and it’s not. Britain is a considerably more high tech country than Japan in terms of everyday life. The best thing about Japan, which is not well trumpeted, is that it’s a very safe country. What I mean by that is the chances of getting involved in a fight in a bar or a street are very, very small whereas in any British town, the chances of that are considerably higher.

I was involved in three or fours fights in Glasgow and Edinburgh and, for me, that seemed to be a fact of life growing up in central Scotland. There’d be bullying, there’d be fights, people would be drunk. In Japan, there is much less of that, much less. We’re talking like, not ten percent of what there is in Britain.

One of the main things most foreigners in Japan think of is that it’s a very safe country and that I think that is a really good achievement, one which Britain should try to become; more peaceful, less violent, safer.

An article I wrote for The Japan Times newspaper ( in English). It's about the photo V peace sign gesture: http://www.japantimes.co.jp/community/2016/05/29/voices/mystery-shrouds-origin-ubiquitous-v-sign/#.WI2AFlcZDHg

And finally, what is an average day for you?

Well, I have a strange working situation which is why I’m doing things at nighttime like this, this is absolutely no problem. I’m used to it now. What I normally do is get up rather late by most people’s standards, like maybe that’s like 10 in the morning or something.

I also do some teaching with the students from the university in the day, which is just a couple minutes away from me. So, I normally answer my writing type emails in the morning and start working on some comic books scripts or some of the [logistical] processes.

I don’t just write the script, the artists also send pages over to me to check and then the publishers ask me to write the description or something for the back cover. I then do interviews like this as well, as promotion. That is the kind of comic book work I do every day. Then I have a class, my lunch and then I have a rest during the day. As they say in Japanese, 昼寝 (hiru ne). It means a rest in the day time, a nap if you like. I think that is very healthy actually and in my case, I have to because after that in the evening I start working again.

Fan of comics? You can visit Sean's website and explore his comic books here. If you already read Sean's work, tell us what you think of it in the comment section below!