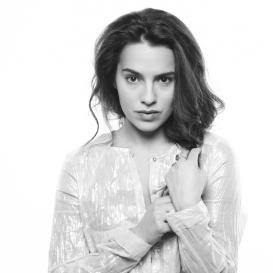 Melia Kreiling is an actress who has featured in shows such as Tyrant and The Borgias, as well as starring in the 2014 Marvel film, Guardians of the Galaxy. She is currently working on Red Bull’s highly anticipated film, DxM, due for release in April 2016.

Melia took some time out of her busy schedule to talk to us about herself, how she got into acting and what’s been keeping her busy.

Hi Melia! Thanks for taking the time to talk to us. Tell us a little about yourself – how did you get into acting as a career, and who were your inspirations?

Hello hello! It took a while for me to get into acting. Some people know that’s what they want to do from a very young age; I certainly never thought I’d be an actor. It took a serious injury to draw me away from contemporary dance, and my family were desperate for me to find something else to do with my life, in order to be re-routed to drama school.

As a kid, I was mostly inspired by an array of mainstream yet content-heavy singers – like Gwen Stefani, Eminem, Madonna – people who created concepts and ideas with their music and had big things to say about their view of the world, but weaved it all into an album or a show with fun and creativity. They were also very theatrical so I guess that, in retrospect, ties in with my own belated discovery of theatricality.

Speaking of theatrics, we haven’t seen much of you on stage yet. Would you like to spend more time in the theatre, or is the call of Hollywood just too strong?

The ‘call of Hollywood’ – it’s like a pack of actors howling at the Hollywood sign! The last time I was on stage was four years ago, and that’s far too long for me. I miss it and I’m trying to find a way back to it.

The Borgias and Guardians of the Galaxy are two very different productions – do you prefer acting for film or TV, or being able to do a bit of both?

I love doing both! TV is incredible nowadays. The Borgias was certainly a beautifully done show, and created by a ‘film guy’ in Neil Jordan; he brought all the cinematic elements to it. Film has a certain magic about it, because you only have one chance to get the movie right; there’s no episode next week to further develop a story or character. An audience has to decide to get dressed, go to the movie theatre and choose to watch it. Even though a lot of people download films today, there is still an essence of formality to it. With TV, it’s slightly more casual. You were always able to be in your PJs, on your couch, in your home. I always feel like film extends an invitation to you, and TV asks for an invitation from you.

You’ve recently wrapped on your next project, Red Bull’s first fiction feature, DxM. Tell us more about the movie and what we can expect to see you doing.

I play Stella in DxM; she is enigmatic, highly intelligent, slippery, and a very new kind of kick-ass heroine. DxM is a film that will draw sci-fi and action fans for sure. It delivers on all the hot elements of these genres, with special effects and real parkour sequences. It follows a group of genius scientists who are on the verge of establishing wireless neurological connection between humans, in order to heal the injured or diseased body. The characters of the film are all very distinct and powerful.The movie combines sexy mainstream visuals with a highly challenging storyline that’s designed to feel trippy.

Even though you’ve been so busy, is there anything exciting coming up for you in the future, both personally and professionally?

I’m on an island in Greece right now, sat next to my mom while we both type away on our computers, sipping chocolate milk and about to lose radio contact… that’s all i know for the next week!

You were born in Switzerland, raised in Greece and studied in England. You’ve seen a lot of the world! Where’s your favourite place to be and where do you call home?

Greece is home for sure, it’s where I feel most like myself, even though I haven’t lived there in over 8 years. The US is also home, because it’s where I visited my dad for most of my life, and now I live there. I can’t imagine not going back and forth between the two.

Speaking of travelling, you filmed the new series of Tyrant in Budapest. Tell us more about the show and what drew you to your role as Daliyah?

Yes, we just finished shooting S2. Tyrant is a show made by a really impressive group of people behind the scenes, and a truly fun and hardworking cast to work with on-screen. The story is about a fictional middle eastern country and the presidential family that runs it. In S2 especially, it follows the turmoils, heartbreaks, scandals, corruption and agendas of a nation that is trying to keep step with the 21st century without giving up its own strong cultural identity. The characters are human, they make errors, they breathe and have needs. The situations they find themselves are what some people will call extreme and others will call part of daily life; depending on what experiences the viewer has.

My character, Daliyah, is the second wife of a kind and generous bedouin man, who finds herself caught by an extremist regime just as she is about to embark on a journey to be educated in Europe. From the episodes that have aired so far, she and her family have given a home to Barry, the main character, who is assumed dead at this point. Without giving away too much, life gets pretty sticky for this otherwise calm and peace-loving family. I was drawn to Daliyah because of the quiet fight in her. She isn’t an obvious heroine; she learns along the way, and adapts intelligently without losing her identity. I think this season the show covers a lot more ground and difficult subject matter, as accurately and intelligently as possible.

You’ve worked alongside some great actors lately – Jeremy Irons, and Chris Pratt to name a few. What is the number one thing you’ve learned from them and who would you love to star alongside?

The thing I’ve found most consistently, is that those we call ‘great’ are incredibly hard-working, even though part of the job is to make it look as easy as breathing. You don’t get anywhere – and stay there – if you aren’t! Talent is what may draw someone’s attention to you, but hard work is what keeps it there. That’s my 5 cents – probably stolen – wisdom for the day.

Do you have a favourite actor or anyone who particularly inspires you?

There are performances I fall in love with. Felicity Jones in Like Crazy, J.K Simmons in Whiplash… So many actors who bring something unexpected and revised, but also simple and human. I have a romantic notion that each actor that has inspired me through a performance, approached it with a lot of kindness, humour, and unmatched empathy.

Finally – we’re dying to know – did they really paint you pink in Guardians of the Galaxy, or was it just CGI?

Yep! Multiple layers of it! We had a lot of fun with makeup artist, Nik Buck, at 3am in the trailer!

DxM is due to be released in the UK in 2016. The second series of Tyrant will be aired in the UK this Autumn.