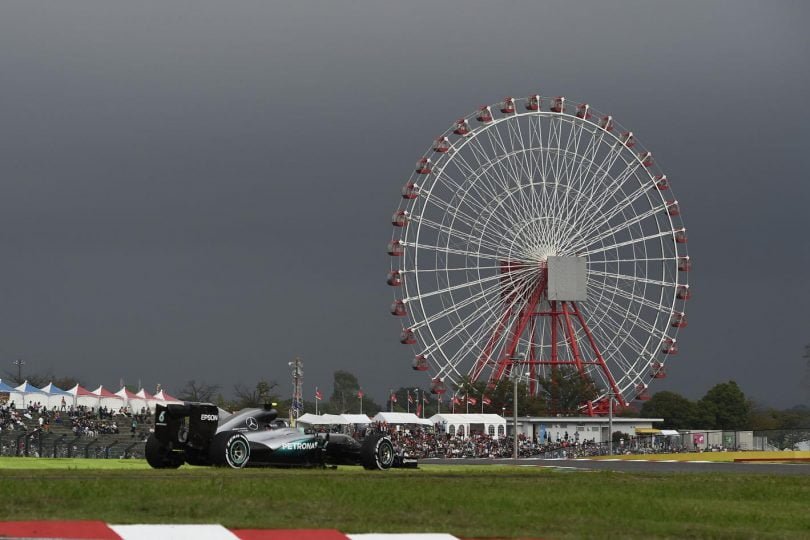 Just .013s separated Nico Rosberg and teammate Lewis Hamilton in qualifying for the Japanese Grand Prix. It was the tenth time that the Mercedes pair have locked out the front row on Saturday afternoons in 2016.

Championship leader Rosberg had the edge over Hamilton heading into qualifying with the German topping every session so far this weekend. Despite trailing Rosberg in both Q1 and Q2, Hamilton was on provisional pole position after the first runs in Q3.

The top six covered by half a second in #Q3

Despite Hamilton going even quicker on his second attempt in Q3, Rosberg was able to edge ahead of Hamilton by the slender margin of just .013s in Q3.

Kimi Raikkonen's good current form continued and could find himself on the podium tomorrow afternoon and will start on the second row. The Finn was faster than teammate Sebastian Vettel who was handed a three-place grid drop following his penalty from last weekend in Malaysia.

Max Verstappen won the inter-team battle at Red Bull, the teenager went a little over a tenth faster that Ricciardo who won in Sepang.

Sergio Perez beat both Hass drivers who both made it into Q3 for the first time in the team's history with Esteban Gutierrez rounding out the top ten. Hass were in a fight with Force India all session long with Force India looking to finish 4th in the constructor's championship.

Force India were handed a boost when neither Williams driver managed to make it into Q3. Both Valtteri Bottas and Felipe Massa struggled for pace but we not too far off the time to make it into the final phase of qualifying.

Daniil Kvyat and Carlos Sainz made it an all Toro Rosso row seven for tomorrow with the Russian claiming that he extracted all that he could from the car. The Red Bull junior team have been making big strides recently in terms of aerodynamics but feel they are being hindered by running a 2015 spec Ferrari engine.

Neither Fernando Alonso or Jenson Button were able to give the home fans something to cheer about. Alonso scraped into Q2 and in the process knocked out Jenson Button. The McLaren's will start 15th and 17th tomorrow, with Jolyon Palmer sandwiched between the pair.

Both Sauber's were able to beat the Manors with Pascal Wehrlein rounding out the grid.