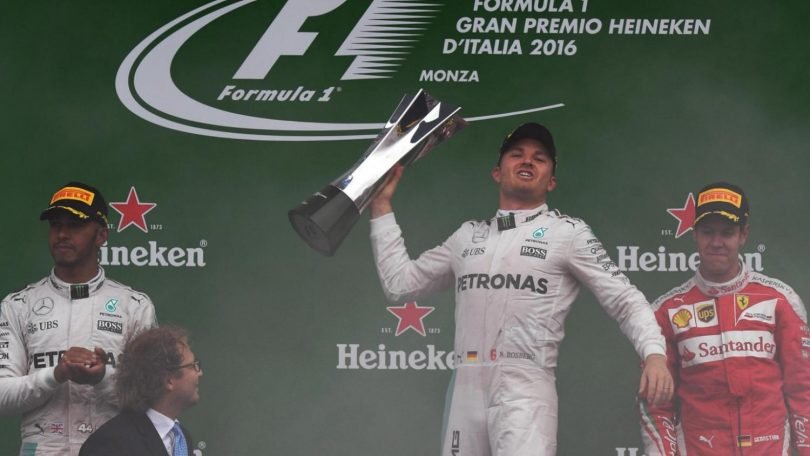 Teammate Hamilton managed to recover from a bad start to finish behind Rosberg in second place with the Mercedes pair being joined on the podium by Ferrari's Sebastian Vettel.

Kimi Raikkonen finished in fourth ahead of Daniel Ricciardo and Valtteri Bottas. The top ten was rounded out by Max Verstappen, Sergio Perez, Felipe Massa and Nico Hulkenberg.

It was a walk in the Royal Park for the German who made the better getaway which saw Hamilton drop from pole down to as low as sixth place on the opening lap.

Whilst Hamilton battled his way back through the pack, Nico Rosberg was unchallenged as he set about building up a comfortable lead.

Behind the leading pack, there was action at the back of the grid. Jolyon Palmer's poor season did not get any better for the Brit after being hit by Sauber's Felipe Nasr on the exit of the first chicane, ending Palmer's race prematurely.

Hamilton went about repairing the damage and passed Ricciardo on the second lap. Although Mercedes had the quickest car, passing a Williams that has the same engine on a track with very few corners would not prove too easy for Hamilton.

On Lap 11 Hamilton finally made a move on Bottas for fourth place. Thanks to the single lap pace of Mercedes, the Silver Arrows were able to set their Q2 time on the soft tyre, therefore meaning they had to start the race on the yellow marked compound.

With Ferrari starting on the super-soft tyres, they pitted earlier than Mercedes which handed second place to Hamilton.

LAP 25/53: ROS into the pits, onto mediums and, crucially, out AHEAD of VET #ItalianGP  #F1 pic.twitter.com/GaW7jiAS8l

At this stage, both Mercedes drivers were in a race of their own as Hamilton began to try and claw away at Nico Rosberg's lead. The Brit who was eager to make up for his poor start was catching Rosberg at a rapid rate.

A mistake at the first corner on lap 41 put an end to Hamilton's hopes. Hamilton locked his front left brake which sent the championship leader on a trip across the kerbs at Turn 1.

During Hamilton's pursuit of Rosberg, the fight for the small points was thrilling as Ricciardo and Bottas locked horns. The Red Bull was a long was back from Bottas as the pair exited the Parabolica, but it did not stop the Aussie from sending one up the inside of the sensible Finn who left Ricciardo just enough room.

Ricciardo pulled off the overtake of the season and he could not hide his delight after making the pass.

Elsewhere, Max Verstappen made a late pass on Sergio Perez which moved the teenager into seventh place. Jenson Button, who announced last week that he would not be racing in 2017, overtook teammate Fernando Alonso for 12th place in a race with very little incident.