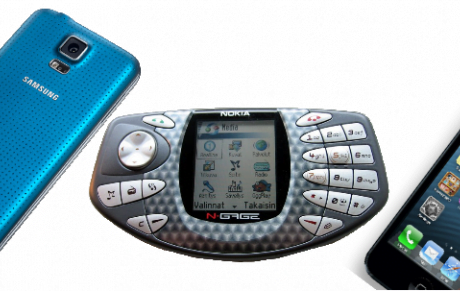 Humans have always looked for the easy way to do things – we invented the television and then the television remote so we didn’t need to get up and walk the couple of metres to change the channel. So why is that mobile phones are getting all the stick?

News reports claim that we are becoming heavily reliant on the portable device and their constant changing and adapting of new features increases the hunger to own one. They’ve evolved from large, obscene machines that came with a separate battery pack that you had to lug around to place phone calls on the move to the small, aesthetically pleasing phones that can take pictures, store music and films, grant access to the internet and emails, and watch television. So surely this is innovative and not lazy and reliant?

I do think that the whole updating of phones is happening too quickly and consumers are falling for the idea of having something ‘new’ all the time. I mean take the new iPhone 5 – my friend pointed out to me that the phone, which apparently is the ‘biggest thing to happen to iPhone since iPhone’, has been advertised with the unique selling point that it comes with earphones that are shaped to fit perfectly. I know what you’re thinking – quick rush to the shops and pick up the iPhone 5 today…or not!

The recurring argument against the mobile phone is the idea that they are constantly stuck to our ear causing issues with face to face socialising. However, I think it’s the opposite. Yes, there may be people sat on the tube or the train unplugged from the world as they are listening to music whilst surfing the internet but how many people, before phones dominated the world, would engage in conversation with strangers on public transport? The mobile offers quick and easy communication to anyone in the world therefore connecting people in a way that we have never had before. And as for those friends closer to home, sites like Facebook and Twitter are another way that people can communicate and offers talking points for face to face interactivity. Yes, that’s right, I’m saying it helps and not hinders social connectivity! I don’t know any of my friends or their friend’s friends who have cancelled meeting up for drinks or a spot of lunch because we had already communicated via text message or through a social network.

However, it does seem that no matter the size of group we all seem to hover towards our phone at the same time, which for me and my friends is an acceptable thing and we jest about the fact that we are being unsociable and put our phones down. But there does seem to be an obsession with looking at our phones. This might sound crazy but my leg even has its own twitch that vibrates exactly like my phone because I’ve constantly got it on me. Don’t worry you can laugh – everyone else does!

But it’s as I’ve started writing this article that I fell victim to the worst horror imaginable – I lost my mobile phone. Now it might be someone up there’s weird idea of fate or destiny that allows me to experience something to write about. If you was to ask me whether I was dependant on the pocket machine then I’d probably laugh and tell you not be ridiculous but…losing my phone has made me realise how much I actually am.

The first thing I’ve noticed is I still constantly check my back pocket and the side of my pillow during the night (that’s where I normally keep my phone) and stick my bottom lip out when I realise it’s not there. I’ve also had to resort to another form of alarm clock to wake myself up in the morning, which has meant that I’m practically sleeping with one eye open so that I’m not late for work or university. As well as this I’ve had to earwig other people’s music on my daily train journeys and to pass the boredom I’ve had to stare out the window rather than catching up and updating my social networking sites. It’s really strange how dependable I’ve become on my phone and all I can hope for is that the postman brings it back to me very, very soon!