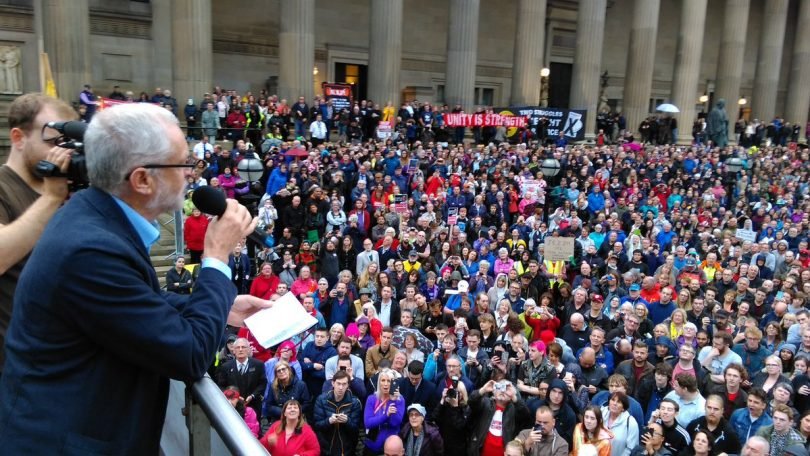 The primary question of this Labour Leadership election has been one of electability. Mainly questioning the electability of current leader Jeremy Corbyn. 63 MPs have resigned solely because of their inability to work with Corbyn and his lack of electability. To the Parliamentary Labour Party, Jeremy Corbyn is unelectable and it has been brought forward as the central issue in the second Labour Leadership election in the last year, but I can tell you as a Labour member, the PLP has got it cataclysmically wrong.

What we as Labour party members should be asking, what the PLP should be asking, and what the media should be asking is ‘Who within the party is more electable than Jeremy Corbyn? Is there someone and is that someone Owen Smith?’. The answer to that question is no. Owen Smith has been presented to the public and Labour members as the perfect electable Labour candidate, just like Gordon Brown and Ed Miliband before him, men who can lead the Labour party to a victory in General Election, because Labour won the last two general elections right? Remember that, when Labour remained in power for 19 years? No me neither.

Owen Smith isn’t electable. A hard fact for the PLP to accept but when comparing Jeremy Corbyn’s 242 CLP (Constituency Labour parties) to Owen Smith’s 45, it’s clear that party members overwhelmingly are in favour of Corbyn. The people do not want another suit and tie politician and the suit and tie politicians of the PLP don’t seem to understand this.

Specifically, Owen Smith is a poor choice for Labour leader because of three key issues. Firstly prior to becoming an MP he was a highly paid senior lobbyist for Pfizer, one of the biggest pharmaceuticals company in the world. That means as a career he actively lobbied for the privatisation of the NHS and for an American company no less, in one question mentioning this any journalist worth their salt could destroy Owen’s electability faster than a poorly eaten bacon sandwich. His second flaw, he’s an outright hypocrite, he has attacked Corbyn and his supporters claiming they started a misogynistic rhetoric within the Labour party but on multiple occasions has made sexist remarks, such as when he said he wanted to “smash her back on her heels” when referring to Theresa May and last year he stated Plaid Cymru’s leader Leanne Wood only gets asked on Question Time because she is a women, it’s shocking that strong feminist figures within the party such as Jess Phillips and Stella Creasy would support Owen. Suggesting misogyny didn’t exist in the Labour party before Corbyn is laughable in itself but perhaps the biggest hypocrisy of Owen Smith are his calls to unify the Labour party and end its internal struggle, perhaps he forgot that he caused the damage by leading the largest coup Labour has had for decades.

Finally, Owen Smith can’t succeed because he is the product of a fragmented Labour party that doesn’t know what it wants. He has been selected by the Blairites and the Soft Left to lead the party, but to do so he’s adopted a lot of the same policies as Corbyn to win back the Far Left fringe members of the party. I don’t think that Owen Smith has a vision for the Labour party and I honestly believe that he is just a foot in the door for Blairites, once Corbyn is out of the way they will toss Smith out of the way in favour of another perfect, more electable candidate.

I don’t think Jeremy Corbyn is perfect, far from it. If there was a more electable candidate within the Labour party, they haven’t made themselves known, and if Owen Smith is the best the PLP can muster their ideas of what makes a candidate electable are fundamentally flawed. Perhaps instead of fighting Corbyn and his supporters, the PLP should try and back him because the public want a unified opposition. We want honest politics not Westerosian politics.

What do you think? Have your saying the comments below.