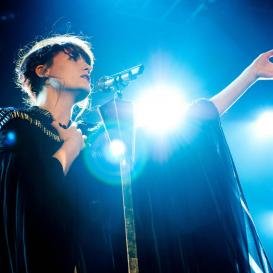 Following the unfortunate loss of the Foo Fighters at this year’s Glastonbury Festival, Florence and the Machine were moved up to the headline spot. A worthy stand-in, with three number one albums, what’s surprising many is that they are the first female fronted headliner in 16 years.

This raises many questions about gender inequality within the music industry. Women aren’t less talented. There isn’t a shortage of successful female bands and artists. So why are they missing from the festival spotlight?

How does Glastonbury compare to other festivals?

It turns out that Glastonbury isn’t the only festival to shy away from female headliners. Similar inequalities can be found at T in the Park, Reading and Leeds, Download, Creamfields and more. The Guardian looked at the listings of 12 UK festivals, and found that 86% of the performers are men.

In addition to this, of the 14 headline acts at Glastonbury, T in the Park, Reading and Leeds, Isle of Wight and V Festivals, only two others are women; Fleetwood Mac’s Stevie Nicks and Christine McVie.

The festival scene faced the same problem last year. In another last minute fill in, Lily Allen at Latitude was the only female headliner at a major festival. This was in spite of the overwhelming success of other female artists, such as Adele who the Sunday Times named Britain’s richest young musician.

This inequality at festivals is just the end product. Deeming women less worthy headliners must start at the roots of the music industry itself. At what stage are female fronted bands and artists placed below the bill compared to their male counterparts?

What can you do to support female artists?

While you might not be the one who books the main stage at Glastonbury, every fan is a key part of the music machine. Look at festival line ups and question the diversity of performers. Not happy? Say something.

As a listener, step outside of the charts and main stage line-ups, seek out the artists who inspire you. Be the one to spread the word of those female artists with talent and ambition. Buy their music, buy their merchandise, go to the local shows and national tours, tell your friends about them. Take your female-fronted fandom to social media – Every Facebook share and retweet helps raise the profile of a deserving artist.

If you’re involved in the industry from a professional level, be that a blogger, editor, promotor or manager; take a look at the artists you’re representing. Ask yourself if there’s equality in the bands you’re covering or booking for shows, and if not, why? You could be the one to drive change and discover the next Florence Welch, the next festival headliner.

It won’t happen overnight, but that doesn’t mean we should all just sit here through another 16 years of male fronted festivals. It will take a conscious effort from everyone involved to address the problem and make a difference, and that starts with you.

If there’s a female fronted band or artist you love, let us know in the comments below!