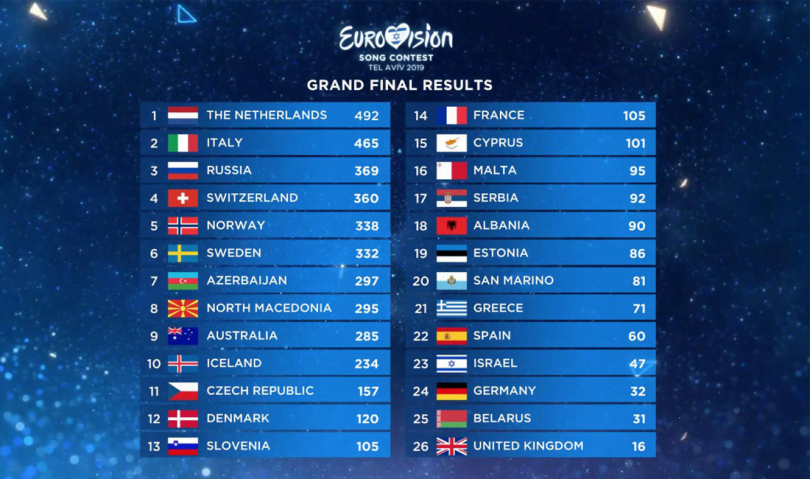 A reported 6.9 million Brits tuned in to BBC One on the 18th May in time for the Eurovision Final. Following a fantastic show full of talent and eccentricity, the results were in with The Netherland’s Duncan Laurence winning with ‘Arcade’ by just 26 points. The UK did not fair well in the rankings and came in last place with a dismal 16 points awarded to our representative Michael Rice. This has caused a number of complaints with many claims of the Eurovision song contest being all about politics. Even Rice himself has blamed Brexit for his entry being so unpopular. But this begs the question, is the Eurovision song contest inherently political?

Is Brexit to blame?

It doesn’t take a genius to know that in the current political climate, Britain isn’t on the best of terms with Europe. Following the Brexit debacle, tensions have heightened so Michael Rice wasn’t in the best position going into the competition. However, in recent years the UK has never really done well in Eurovision even before Brexit was a suggestion so this can’t have had much of an impact on the jury votes. Personally, I think the performance given by Rice didn’t live up to the expectations the public has of Eurovision. Rice did sing well, and the song was well-written but there is so much more to a Eurovision performance than that. It needs to be theatrical, have a catchy chorus to encourage audience participation and it needs to be fun! But Rice’s performance didn’t include any classic Eurovision attributes. Therefore perhaps the artistic choices made were the UK’s downfall and not the politics. Often the acts put forward for other countries already have number one singles in the charts which gives them more public support. Whereas the UK tends to choose unknown acts meaning they are at a disadvantage in comparison, Michael Rice is an example of that.

Iceland's entry to this year's Eurovision song contest in Israel held up pro-Palestine banners, but their "protest" received mixed reactions from Palestinians pic.twitter.com/xQZBTxDzEa

Could Iceland be penalised?

But politics couldn’t be entirely avoided on the night with Iceland drawing attention to the Israel and Palestine feud. Audiences at home saw the Iceland representatives holding a Palestine flag raising awareness for the mistreatment of Palestinians. As a result, Iceland may face repercussions for breaching the rules of the Eurovision song contest. The organisers of the event have stated that it is a “non-political event and this directly contradicts the contests rule”. So, can politics be forgotten for the sake of an event? Or is Eurovision the perfect platform for speaking out about important topics like politics? This years event points to the latter.

Madonna made her Eurovision debut this year and included a political message within her performance. Two dancers represented a peaceful union between Palestine and Israel with the flags displayed on their backs. Madonna sang the poignant lyrics at the time, ‘Not everyone is coming to the future/Not everyone is learning from the past’. Earlier in the night, Madonna also referred to the political tensions between Israel and Palestine, “I’ll never stop playing music to suit someone’s political agenda, nor will I stop speaking out against violations of human rights wherever in the world they may be.” She made her position on the Israel and Palestine conflict very clear throughout her appearances on the night.

Overall, Eurovision is a fun competition, made for entertainment value and it is not intended to be inherently political. However, depending on the hosting country of the event the political situation can become unavoidable. The irony of Israel having a performance dedicated to unity whilst their political situation is the opposite exemplifies this. At heart the contest is down to the individual acts and the enjoyment of the audience. Brexit could be said to have some influence on the results but maybe this years act just wasn’t good enough? Therefore, Eurovision isn’t intentionally political but the political situation cannot be ignored in some circumstances. An example of this is the Israeli and Palestinian conflict.