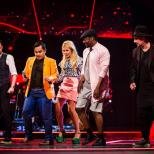 Malaysian born Jeffri Ramli is used to busking on the streets of Newcastle, yet after his audition on The Voice UK, culture editor Gemma Hirst talks to Jeffri about his experience in music.

Where did your interest in music come from?

Since I was a little boy, I was always a fond of Disney’s animation movies and songs. My father, God bless his soul, was the one who encouraged me to pursue the things that I’m passionate about. He bought me many Disney cassettes and video tapes. In some ways, they have triggered an infatuation and in a great deal contributed to the initiation of my love towards music. I could sit and listen to the songs all day long and memorise all the lyrics. Although I had so many friends in the past, I often spent time on my own as I required some privacy to properly learn the songs. Still, until now I keep applying the same approach prior to my upcoming gigs and live performances.

I can still remember the time when I was about 6 or 7 years old, I performed in front of a big crowd for the first time accompanied by a live band on the street outside Central Market in Kuala Lumpur, and sang a song called ‘La Bamba’. It then became my regular spot and I performed almost every week. Of course, at that very young age I couldn’t tell the difference whether I sang the song correctly or not but I truly had great times. Despite my young age and lack of skills and knowledge in live performance, I managed to attract many spectators. This has significantly helped me to build up my confidence and self-esteem as well as boost up my interest in music.

How long have you been busking in Newcastle?

I’ve been busking in Newcastle since 2014. I always wanted to do it but hadn’t got the guts to do so until then. I finally braved myself to go out there on Northumberland Street in Newcastle. Initially, I felt so nervous because I wasn’t sure whether the people would like it or not. I slowly gained confidence as I received loads of excellent feedback from the public.

How was it performing for The Voice audience in comparison to the Newcastle audience?

Performing for television is a completely different environment from performing live on stage. There are loads of things going on at times and you have to be alert and ready.

The scariest, but at the same time exciting thing, is there are millions of viewers from around the world watching The Voice UK. Therefore, whatever you do or say will be judged not only by the celebrity judges but also the audience globally. Due to my previous experience with The X Factor auditions in 2014, I got the ideas how to present myself in front of the camera for reality TV shows.

Is singing your only career?

No, apart from singing, I’m a Graduate Civil and Structural Engineer. I also represent the Institution of Civil Engineers (ICE) as a Graduates and Students Network representative for the North East of England. I’ve been involved with the ICE since 2008 when I was pursuing my studies in Civil and Structural at Newcastle University. I also present a weekly radio show called The Jeffri Ramli Show every Tuesday from 12 noon until 2pm at Gravity Radio North East, a community online radio station based in Newcastle City Centre.

What is it about singing that you enjoy?

Singing helps to release endorphins, so-called the ‘happy hormone’. When I sing, I feel as if my soul is flying in the air, with music. I love to sing a lot because it expresses myself and how I feel. Singing also helps me to release tension and stress especially after a stressful day at work. By learning new songs and memorising the words to familiar songs help me to strengthen my memory and increase my concentration.

Who are your musical idols?

I listen to all sorts of music in various genre and languages. The only kind of music I don’t listen to is heavy metal. My musical idols are Boyz II Men, Adele, Luther Vandross and Michael Jackson. I have more but those are my main ones.

What was your experience of The Voice like, was it what you expected?

I had a great time auditioning for The Voice UK this year. The production staff were really friendly and looked after each and every one of the participants very well. I was feeling a bit nervous and at the same time excited to meet the celebrity coaches Will.i.am, Ricky Wilson, Paloma Faith and Boy George. I didn’t expect Will.i.am to know about the “Poco-Poco” dance. He thought it was a Malaysian traditional dance but I corrected him that the dance originated from Indonesia.

What is the future for Jeffri Ramli?

My short term goals are to produce my own songs and release an album. I will also try to enter some other talent competitions such as Britain’s Got Talent or even try my luck again at The X Factor or The Voice UK next year. My ultimate dream is to become an internationally known singer-songwriter.