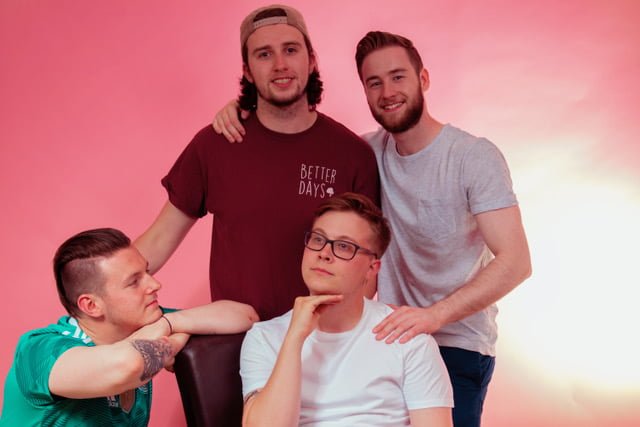 The Scottish music scene is exploding with incredible talent right now and whats more, it’s different, feisty and not the usual bland rhythms the UK overall seem to be producing in the mainstream. This of course includes WRTHLESS, a band who don’t trust the O, who want to kill the Batman and are certainly have a lot of fun doing what they love. Their latest video ‘Give me a reason (To be on my own) is out now for your musical pleasure, but before you delve deep in to their wonderful archive find out their loves, their essentials and what they are working on.

How is it up in Scotland? What is the music scene like that way?

Yeah the music scene up in Scotland is in a really good place at the moment. Outside our genre there’s a lot of really fantastic unsigned stuff happening in a few different scenes. Right now were really into bands called Tenements and a band called The Dunts. Within the pop-punk scene though there is just band after band, all doing great things. Too many to name, but yeah the scene is definitely on the up in Scotland.

Has anyone given you a reason to be on your own or have you decided attached is the best policy?

Ahhhhhhhhh nice reference. We’re all firm believers in doing what’s best for you. With that being said, we don’t need a massive reason to be on our own when we have DIablo III and WoW.

If you were to trying to describe your music to someone who hadn’t ever heard it before, how would you describe it?

The best way to describe our music is sort of that old school, early 2000’s pop-punk sound, with just a hint of modern pop-punk and a smidge of sad boi vibes in it. I think we hit a pretty cool and unique blend of pop punk through the ages.

Would you rather be a baddie in Gotham or Metropolis? and which one would you be?

You said last month that you were working on things behind the scenes, can you reveal anything yet?

We’ve got a batch of songs all recorded and ready to go. We don’t know how yet. But they’re pretty much all ready to go. We have a couple of wee things that are just ready to go very soon. Our biggest secret though is that we’re currently planning and devising a special campaign, with the end product being very simple. We kill the Batman.

Why drop the O? What is wrong with that letter?

It’s just a terrible letter, and we hate to be judgemental. It’s nowhere near as good as the letters W, R, T, H, L, E or S. So unforgivingly, it never quite made the cut. It’s too similar to a zero, and I don’t trust it.

What are the origins of the band? Where did it all begin?

Our origins are a bit all over the place. But to summarise, I (Stuart) kept beating Jordan at football when we were young so that’s how we knew each other. Jordan and Jonny met at college, and me and Jamie were pals at school. Now here we are, a little bit older and a little bit uglier.

You seem to be quite a colourful band, your pictures etc are quite bright and attention grabbing. Would you say this reflects your personalities?

I have absolutely no idea. I think we’re all pretty creative, not just musically but in lots of ways? I dunno. I’m not sure I would describe us attention grabbing though.

If you could bring any musicians back from the dead to perform with would it be and what song?

I’m gonna do everyone a favour in the band and whether they like it or not say Joe Strummer and he could play whatever the hell he wants to play. A wee verse and chorus of (White Man) in Hammersmith Palais wouldn’t go a miss though.

Lastly … what are the 5 most important items to have with you back stage?