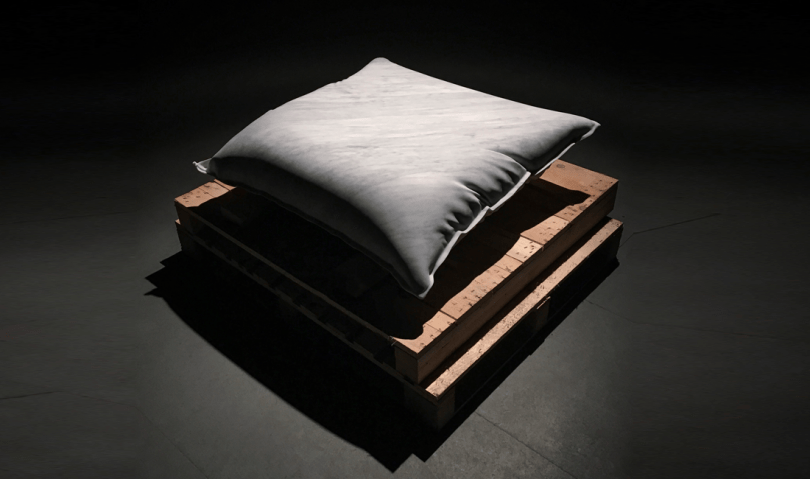 Jonna Kina has a warm smile and a kind demeanour. Her passion for art is unquestionable as she dives straight into talking about her latest piece, Somnivm, on the walk to the filmic part of the exhibition.

The piece, which is named after one of the first works of science fiction by Johannes Kepler in 1608, consists of a short film and a marble sculpture. It is on display in Beaconsfield Gallery Vauxhall in London until 22 April.

Kina is a 33-year-old Finnish artist who works with a variety of different media, including films, installations, photographs, sculptures, sounds, texts, and publications.

The emerging artist is continuing her growth into the international arena, with multiple awards to her name. Kina was selected by jury for the Below Zero Art Prize, an initiative Beaconsfield came up with in collaboration with the Finnish Institute and the funder, a Finnish patron keen to offer an emergent Finnish artist and opportunity in the UK.

Jonna Kina has travelled the world, studying and creating art as she goes. Her education included the Finnish Academy of Arts and Aalto University, the School of Visual Arts in New York, and Bezalel Academy of Art and Design in Jerusalem.

You might have seen her work before, since it has been displayed in Musée de l’Elysée, Hasselblad Centre, Tokyo Photographic Art Museum, Sala Alcalá 31, Helsinki City Art Museum, and the Finnish Museum of Photography among many others.

Kina’s inspiration for Somnivm derived from an interest in the relationship between anarchism and the marble industry. During the winter of 2017/18, Kina visited the quarries of Carrara in Italy and spent a great deal of time researching them.

The exploitation of natural resources since Roman times continues to transform the landscape at a rate you would barely believe, reflecting the value of this white mineral in Western culture.

The first element of the exhibition is the film, which lasts just over twelve minutes and is shot on 35mm film transferred to 4K.

When speaking about the process of making the film, Kina said: “I removed all the elements that indicate an active quarry, such as trucks, cannisters, cables, and gas tanks etc in the post production.

“It’s quite interesting to watch the film before reading the accompanying text because it could be shot at any time. It could be about ancient civilisation or after the human race is gone.”

Sound and film are combined to make watching this film an experience. It is not just about watching what is on the screen, but also listening to the sounds and thinking about what it represents. The film stands alone in the room, and you can see different things depending on whether you stand far away or close to the screen.

Perspectives are an interesting element of the film. The viewer becomes lost in the scale of the quarry, as close up shots of the wall markings are combined with far away images of the mountains.

People have been working on the Carrara quarries for 2,000 years, and the space would have been very different without human intervention. Kina shows this with her camera shots, and her post-production work.

The contrast between the natural and the man-made is a constant element of this exhibition. Every sound you hear is recorded from the site, whether they are natural sounds of the wind blowing or the metallic noises made by the machines and workers.

Retractor Hydrobag is the second part of this exhibition, offering insight into both classical statutory and the modern-day industrial methods of the marble quarries.

The marble sculpture replicates a used, iron retractor hydrobag, which is a tool used by workers in the quarries to separate up to 200 tons of stones from the mountain walls.

However, the sculpture also looks like a big, comfortable pillow, making an interesting connection between objects of industry and the conditions of resting and dreaming. It plays on the popular motif of the antique and beyond.

Jonna Kina described making the sculpture as “hard, labouring work, using a combination of modern technology and work by hand”.

She added: “For me it was important to show this piece together with the film. I wanted to use the material the quarry workers were dealing with to show respect for their work.”

Summing up her feelings about her work, Kina said: “I like that the viewer can make up their own story for this – where is this place, what is happening, what does it mean?”

Kina has produced such a range of exquisite work. One which she spoke about in detail was her Secret Words and Related Stories (2016) piece, which is made up of people’s passwords and the stories behind them provided anonymously.

Kina spent three years working on the project from 2013 to 2016, and finished it while she was studying in New York.

It consists of a book, glass works, and a video, in which young actors between the ages of 12 and 16 stand on a red backdrop and read about the passwords.

The stories are often personal confessions or childhood memories; they are thoughtful, humorous, and emotional. Strangely, these passwords expose a lot about a person, becoming the very antithesis of what they are meant to be.

It was exhibited in December 2017 as part of the DIRECTING THE REAL: Artists’ Film and Video in the 2010s exhibition by Leonardo Bigazzi at the Galleria delle Carrozze di Palazzo Medici Riccardi in Florenze, Italy.

Kina’s Somnivm came to be displayed in Beaconsfield Gallery Vauxhall because of its Finnish connections.

Naomi Siderfin, co-founder of Beaconsfield, said: “We have a long history with Finland. We showed the first exhibition of contemporary Finnish art in the UK ever here at Beaconsfield in 1997 and this is the reason for our long-standing relationship with the Finnish Institute and the Finnish art world.”

Beaconsfield was founded in 1995 to occupy a niche between the institution, the commercial, and the ‘alternative’. It is now a unique testing space for artists to play with and display their work. Its programme includes exhibitions, residencies, talks, and events as well as interventions in off-site public space.

When asked about how they choose artists and displays, Naomi said: “We are constantly looking for something and we always have our eyes open. Jonna caught our eye because her competition proposal was ambitious and exciting.”

Beaconsfield’s next showing is a collaboration with the Dutch Museum of Photography – Foam, which looks for cutting edge, innovative work and the hottest international competition. The opening night is 16 May, which coincides perfectly with Photo London this year.