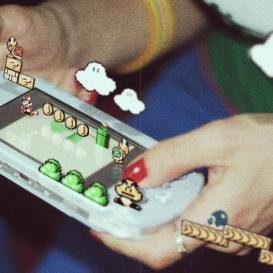 I suppose you could say that I wasn’t your typical girly-girl child, the one all mothers dreamed of dressing up in pretty, pink, floral dresses, and doing their hair in french plaits. No, I was that one kid you had in your class who you were a tad scared of because you didn’t understand why they would wear baggy, boys’ hand-me-down jeans with a chain lolling pathetically at their side in a display of outright rebellion. I was a ‘Skater Girl’ who listened to RUN DMC (rapping all the words obviously) and who played two games predominantly: My Brother’s 18+, Def Jam Vendetta, ,an underground, brutal wrestling game, which I was drawn to due to the concept of the forbidden fruit, and SSX Tricky. As an immature child, I think part of the attraction to this snowboarding game was the close letter association to the word ‘sex’, as well as the provocative language and clothing that littered the game. Yes, unfortunately, I was very much aware of what I looked like, and how I acted… and I loved it.

For most fellow girl gamers that I have come across in various lobbies, they were along the same lines as me as a child, and continue today, to maintain that ‘I’m just going to be a little different’ attitude to life. I am an avid gamer. I game every day and night and still manage to juggle Uni, a job and life on the side, so I’m not entirely a festering ball on the sofa, just to clarify! However, having said that, the theme tune to my life is ‘EA Games… *whispers*… Challenge Everything…’. And with that I will finally enlighten you folks into one aspect of girl gaming that I find increasingly interesting.

Sexism is one crucial factor that not many people consider when thinking of girl gamers. To be fair, the majority who think about them anyway are merely prepubescent boys lusting over the concept of an ‘ideal girlfriend’ who they can teach how to game. However, it is becoming a recurring theme in my day-to-day gaming career. Granted, I am a COD girl through and through, meaning that it is a first person shooter game which appeals, predominantly, to the younger male generations, so I am completely used to being in a lobby surrounded by rowdy twelve year old boys shouting at each other. However, what I shouldn’t be accustomed to is the consistent abuse that I receive both in game chat, as well as private messages. These messages are typed out purposely in order to insult me due to my gender, because, naturally ‘girls should not be gaming’, and therefore should not be at the same or a better level than the average boy playing… The ‘Lad Culture’ concept that snakes through the younger generations, whose boys have not become men mentally yet, I believe is the root of this. It is deemed socially acceptable and almost comical to discriminate within a group of ones peers, and nobody prevents this.

Needless to say, the gaming community is a tough place for the average girl to become part of, and therefore, the majority, in my opinion, of the female gaming population are either part of the LGBT community, like myself or are the feisty girlfriends of male gamers who are more mature than the average boy gamer you come across, and so disregard the opinions of little boys. There are exceptions of course, before you begin to start thinking to yourself, ‘Well I’m not a lesbian, and I’m single, and yet I love to play Fifa‘.

Growth of the girl gaming community

I’m going to make a big assumption now, with lack of evidence, only my own experience and the experiences of fellow GGs that I have met, so bear with me and keep an open mind. I believe that the girl gaming community has grown substantially within the past few years, and I think this correlates strongly with the fact that equal rights within the gay community is slowly rising up world wide, with the legalisation of gay marriage in America, as well as the whole of the UK (key places where gaming is most common). This causes younger teenagers, who are struggling with their sexuality, to feel more accepted in the wider public, without having to conform to the social critique. Although coming out at a young age, or at any age, is difficult, It is, and always has been, easier to come out in a less personal setting, such as the Internet world. Therefore naturally, gaming takes up a large section of that, and by creating your own avatar, name and bio etc. on a gaming console, it allows one to project the persona that they wish to present to the world, and have people like them for them and not just for a face in a crowd.

However, for every light, there is dark. Being merely a face behind a screen, allows for cyber bullying, which is something that, in the gaming world, Microsoft, Sony, Treyarch etc, all the ‘big names’ need to tackle. Which they are not doing very successfully. All that has been done, so far, is the banning of any LGBT account names or emblems etc. on XBOX to ‘prevent victimisation’… Do not attack the attacked; attack the attackers.

In spite of its flaws, gaming is one of the releases that I look forward to after a hard day at work, it can also be the quiet night in with drinks, food and your closest friends, or it can be the sweet, amusing, memories you make with your partner. Don’t let it pass you by until you give it a shot, so grab a controller from your friend, girlfriend, boyfriend, partner, sibling, whoever, just sit and have a game and show ‘em who’s boss. Let’s widen the girl gaming community together.

If you wish to read more, or other blog posts visit: www.gamerfergy.wordpress.com

What do you think? Are you a girl gamer and have you ever experienced any discrimination online? Let us know in the comments section below!