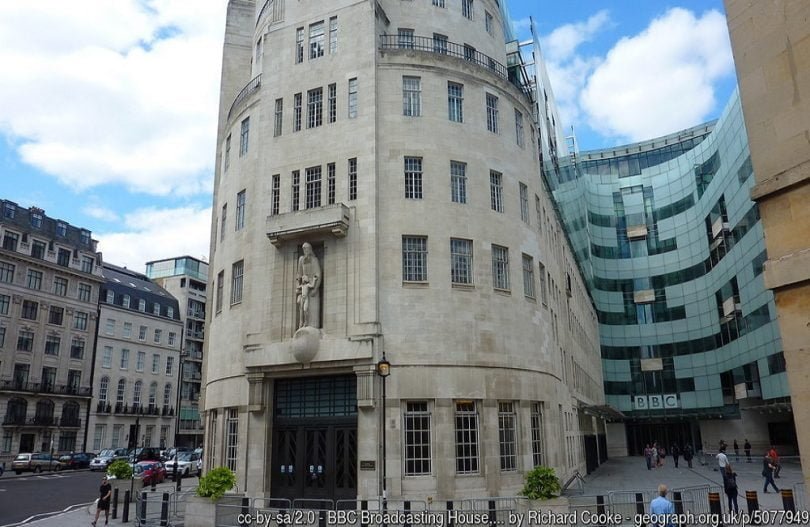 The year is 1982. In a radio continuity studio in central London, an announcer prepares to light a cigarette, as the arts and culture programme Meridian concludes.

“We’re talking about A Good Marriage, by Eric Rohmer,” the presenter says, referring to the latest film at the time by the renowned French director.

That began a documentary on BBC One aired to coincide with the fiftieth birthday of the BBC World Service, titled “Hang On, I’ll Just Speak to the World.”

The bastion of principles

The documentary takes place at Bush House, the former home of the World Service, which has since moved along with the broadcaster’s other newsgathering operations to Broadcasting House.

The World Service this year will celebrate its eighty-fifth birthday. It reaches 147 million people a week, while the BBC’s global news services combined reach 348 million people a week. At the core of its mission is the bringing the world together, and helping to make sense of its events, impartially and accurately.

Impartiality is the bastion of all journalistic principles. It is the component that means all sides will be represented, and when all is said and done, the audience can be left to make up their minds as to the implications.

In the United States, especially during the recent presidential election, the BBC as an outlet appeared to be a refuge from the culture of cable news that relied on opinion and drama – where shouting matches became gold for viewing figures, and the polarisation of Fox News and MSNBC had a significant impact in understanding the impact of candidates, not just domestically, but when it came to America’s role in the world.

The World Service had become part of that. The World Service, since April 2014, has received its funding from the licence fee, as the BBC’s funding reflected an outward looking broadcaster compared to funding just UK services.

There had been recent concerns when it came to the BBC’s impartiality – most recently pertaining to its output in the UK. Earlier this year, the BBC Trust said that the broadcaster’s political editor, Laura Kuenssberg, broke rules about accuracy and impartiality, in a piece about Labour leader Jeremy Corbyn – a ruling that James Harding, the BBC’s Head of News, disagreed with.

Corbyn’s supporters had also expressed concerns about his portrayal in other stories by Kuenssberg, and a petition calling for Kuenssberg to be sacked by the broadcaster had been taken down last year after concerns of abuse.

Separately, concerns were also made by supporters regarding Nick Robinson, the presenter of Radio 4’s Today programme, regarding a tweet he wrote on Corbyn’s speech. Robinson responded to the accusations in a post on Facebook.

Robinson has also been criticised about an essay he wrote for the Radio Times, arguing that the broadcaster’s time to balance sides in the referendum on Britain’s membership of the EU, was over.

“The referendum is over,” Robinson wrote. “The duty we broadcasters had to “broadly balance” the views of the two sides is at an end. Why? Because there are no longer two sides, two campaigns, two rival sets of spokespeople reading out those focus-grouped slogans.”

Robinson wrote that people with strong views on subjects may find it hard to accept views heard may be ones they disagree with.

“The BBC’s job is not to look over its shoulder wondering whether a report, interview or discussion will provoke letters of complaint or a tide of tweets from Remainers or Leavers – who, like fighters who emerge after months of hiding in a bush, seem not to accept that the war is over.

Our job, instead, is to keep our eyes firmly fixed on the audience as a whole – the people we serve – who, in the main, are not members of political parties or campaigns or, indeed, people who would dream of defining themselves by how they voted in the referendum. They are viewers, listeners and readers who want the most significant policy decisions to be taken in decades explained, analysed and scrutinised.

If company A announces that it will invest more in the UK and create more jobs, it’s not our duty to search for a company that says it will invest less, just to balance the news. And vice versa. We shouldn’t turn every news story into an excuse to ask, “Who was right about whether we should remain or leave?” Now that we are “taking back control” of our immigration, trade and industrial policies, there are new questions to ask.”

While the issue of the referendum remains a deeply felt issue on both sides, and supporters of candidates or viewpoints are entitled to express criticism or disagree, the substance of Robinson’s quotes are accurate. What allows journalism to thrive in an age where accusations of fake news have become the norm in certain parts of the world is the airing of views contrary to one’s own.

It is indicative of the foundation of impartiality within journalism. Impartiality applies to more than just reporting – it applies to analysis, too.

The BBC is in a unique position considering the amount of funding it receives from the public, and as a result, much criticism is thrust upon it. Yet, the broadcaster has a responsibility to present these views in order to ensure audiences receive the full 360° of each story, whether its a political story or a cultural story.

After all, if an equal amount of people of different political persuasions are worried about the coverage of their candidate, be it Labour or Conservative, certainly the broadcaster must be doing something right.

The BBC is not being malicious with this approach – it is treating the story as if they would any other, and also ensuring that viewers and listeners in the UK and around the world are at their best.

On the coat of arms at Broadcasting House, there is a saying: “Nation shall speak peace unto nation.” An informed and engaged public contributes its best potential to society, and the opportunity to hear contradicting views is one of those reasons.

The BBC’s role is unique in that regard, and should be valued – for like all who pursue work in journalism, it isn’t about them, it’s about the people they look to serve every day – us.