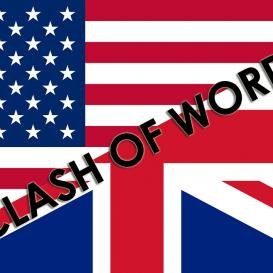 Americans and their vocabulary can become a tad confusing. Okay I’ll be honest – it is more than a tad. Their vernacular is becoming more and more accepted by the British people as they cleverly spread it across the pond. But it’s not just the Americans themselves that are pushing this trend, UK companies are not off the hook. Mashable a UK “leading global media company that informs, inspires and entertains the digital generation”, has an audience of 42 million monthly unique visitors and 23 million social followers. Imagine all those people seeing the American spelling they insist on using. Come on…you do the math! I mean mathS. Someone pass me a rubber…an eraser…pass me an eraser.

On the less serious side the confusion over American definitions continues to keep us Brits highly amused. While at the airport an American friend at Heathrow shouted to his wife, “Don’t forget the fanny packs”, much to the amusement of surrounding Brits who may or may not have known he was referring to thir bum bags. And no he wasn’t called ‘Randy’, which the Americans do insist on using to shorten Randell. Another smirk from the British contingency.

Can’t get any more American than this. God bless our country, fanny packs, and indeed donuts pic.twitter.com/p1xm5mL8rv

It reminded me of an American teacher of ours at sixth form telling us he had been to a wedding where he had, “picked up a creamy tart”. Don’t ask me what the point of his story was because we all fell about into noisy hysterical laughter and he was unable to finish much to his bemusement. After all a tart is a tart in the U.S. Nothing more. A friend of mine in Florida informs me that whenever she talks of eating spotted dick amongst her native friends, they are filled with fear. Who wouldn’t be? Unless you’re a hungry English person on a cold November Sunday afternoon. Bring on that custard.

Putting your foot in it

The food confusion is quite prominent between us and the U.S. According to David Holloway, food writer to the Alabama Media Group, “Jalapeños, bell peppers, celery and just about anything can be found in hush puppies.” Hold it. The only thing I like to find in a Hush Puppy would be a foot, surely? After all they did invent the first casual shoe in 1958. Not in America. The hush puppy is a corn fritter: “A small cornmeal dumpling, flavoured with chopped scallions, deep fried and served hot.” But even they argue the difference between an American hush puppy and a corn fritter…although Mr Holloway states that for argument sake they are as good as the same. And don’t be ordering your good old fashioned spuds with your fritter as you read ‘potato chips’ on the menu…unless you want crisps.

Lawd have mercy. Had catfish and hush puppies for dinner tonight. I’m stuffed

There is similar confusion with flapjacks, which to them are Scotch pancakes. Would you like those cold or broiled? (Grilled)

At school they have a recess – we have a break. They use gum to stick things down – we use glue. They take vacations, we have holidays.

The one that seems a total misnomer is their use of ‘freeway’ for motorway. For anyone who has used a motorway in the UK holiday season I think it is fair to say there was probably nothing related to ‘free’ about it. You were probably stuck in a queue and felt as free as a caged bird. In fact the only time I was able to cruise along a motorway recently was the M6 Toll road…which I had to pay £5.50 for…so nothing free about it.

And what have the Americans got against certain letters when it comes to spelling? Take ‘u’ for instance (and it appears they have, right out of these words): Color, humor, favorite and dialog. Apparently the US spelling is closer to its Latin ancestory than our English spelling. They also like to leave out the ‘l’ as in  jewelry and traveler. And when they do include the letters, they are in the wrong order! Take theatER, and  kilometER. English spelling has it’s advantages. Check out ‘cheque’. Did you know it was worth so much more than the U.S variety? Well, in scrabble anyway, thanks to the ‘Q’. And when I say ‘Q’ I mean ‘Q’ not line!

Schools with their cutting edge interactive white boards are a fantastic digital tool for children (not kids – we aren’t teaching goats here.) But why do all the games have to come with American accents? It’s hard enough to understand what is required in the phoneme games without having someone at the end saying, “good jab” (job) at the end of their perseverance.

Of course we have a great relationship with our American cousins – and secretly we wouldn’t have it any other way. So pop on your sneakers, hit the sidewalk and go celebrate their different way of doing things with a cup of joe. You might like to read Emmi Bowles article about Starbucks name spellings while you are at it.

Cheers!…Or as our cousins like to say, “To your good health.”