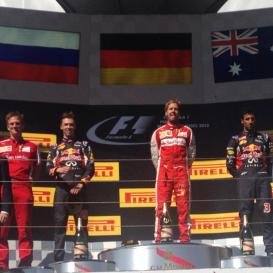 Sebastian Vettel claimed his second Ferrari victory in both a highly emotional and chaotic Hungarian Grand Prix last weekend, a race that some people are claiming to be the best of the season thus far. It could have been a famous one-two finish for the famous team however Kimi Raikkonen’s race ended prematurely after an MGU-K ended his race.

The win came at the perfect time for Ferrari. The Hungarian Grand Prix was the first race since the tragic passing of Ferrari academy driver Jules Binachi who died at the age of 25 after his crash at the Japanese Grand Prix last year.

After the race Vettel dedicated his victory over the team radio and said that Bianchi would have no doubt been part of the Ferrari team.

Lewis Hamilton and Nico Rosberg started the race on the front row of the grid after a dominant showing the previous day in qualifying. Although the Mercedes pair started the race from the front, they were in for a busy afternoon.

Much like at Silverstone, neither silver car led the field into Turn 1. Both Vettel and Raikkonen made the jump on the championship leaders and looked comfortable. Rosberg manage to overtake pole sitter Hamilton on the opening lap and the battle began.

After following his team-mate for half a lap at the start, Hamilton tried to force a move on Rosberg at the Turn 8 chicane. Rosberg defended the line which forced Hamilton into a trip across the gravel trap and was fortunate to live to fight another day. As the Ferrari pair of Vettel and Raikkonen raced into a commanding lead, Hamilton found himself down in 10th place and with it all to do.

By the halfway mark it seemed as if the race had calmed down. Both Vettel and Raikkonen were comfortable and seemed to be cruising home to the finish with the Mercedes of Rosberg being their closest challenger more than ten seconds down the road. The German failed to make the most of Hamilton’s tough day at the office.

#LH44 “In the end, it’s damage limitation. I just need to take the positives and bounce back in Spa” #F1 #HungarianGP pic.twitter.com/KdVQJv2DY4

It was all change a few laps later after Nico Hulkenberg in the Force India front wing failed in spectacular fashion. Thankfully he was unhurt in his collision with the tyre barrier at Turn 1 and a Virtual Safety Car was deployed and was quickly joined by the actual Safety Car joining the track and catching leader Vettel. Hulkenberg was fortunate not to collect the Williams of Valtteri Bottas who was just in front of the Force India on track.

The top 5 behind the safety car consisted of leader Vettel, Raikkonen, Rosberg, Hamilton and the Red Bull of Daniel Ricciardo who was enjoying the teams best performance thus far this season in 5th place. Crucially for Ricciardo, the four ahead of him on track were running the slower prime tyre with himself on the faster option tyres. With Raikkonen suffering with engine problems he had a real chance of a podium.

Ricciardo saw the chance to overtake Hamilton at the restart and went about making up places. Ricciardo got better drive out of the final corner and went for the move on Hamilton. The Brit saw it coming and moved to the inside in an attempt to defend. On cold tyres Hamilton locked up and under steered into the side of Ricciardo.

As a result of the damage Hamilton was forced into a pit stop for a change of tyres and a new front wing. Now on the option tyre, Hamilton was on a charge. Soon after rejoining the action he was then hit with a drive-though penalty for the contact with the Red Bull. He was down in 12th and all hopes of leaving the summer break with the championship lead looked over. Thankfully for Hamilton, he was not the only Mercedes driver to come to blows with Ricciardo. Whilst Hamilton went on to finish in 6th, Rosberg would come home in 8th.

#NR6 “At the moment I’m not looking forward to the break. I want to be back racing again tomorrow” #F1 #HungarianGP pic.twitter.com/ORIzJU9wjE

Whilst Hamilton had a torrid time at the safety car restart Rosberg picked off the struggling Raikkonen with ease and was looking like he had a chance to win the race.

In the closing laps it was Ricciardo on the option tyres that was gunning for the win and looking for his second victory in Hungary. He applied pressure to Rosberg and set about making the move into 2nd place. With just 5 laps remaining the Aussie dived down the inside of Turn 1. When cutting back to take his line, the pair came to blows in what was a seen by the stewards as a racing incident.

The result was a puncture for Rosberg and a nose change for Ricciardo. With chaos all around, Rosberg fell down the field, this elevated Daniil Kvyat into the podium places for the first time in his F1 career with seventeen year old Max Verstappen in a highly impressive fourth place. In what was a fairy tale day Fernando Alonso even managed to pull his McLaren Honda into 5th place for some much needed points.

With success in the air, history was also made by Pastor Maldonado. The Lotus man managed to be hit by three separate penalties in one race. One for speeding in the pitlane, another for speeding behind the Safety Car and his third and final penalty was for an incident with Sergio Perez.

A perfect race to end the first half of the season on. Here is the top 10 fininshing positions from what was a memorable Hungarian Grand Prix.