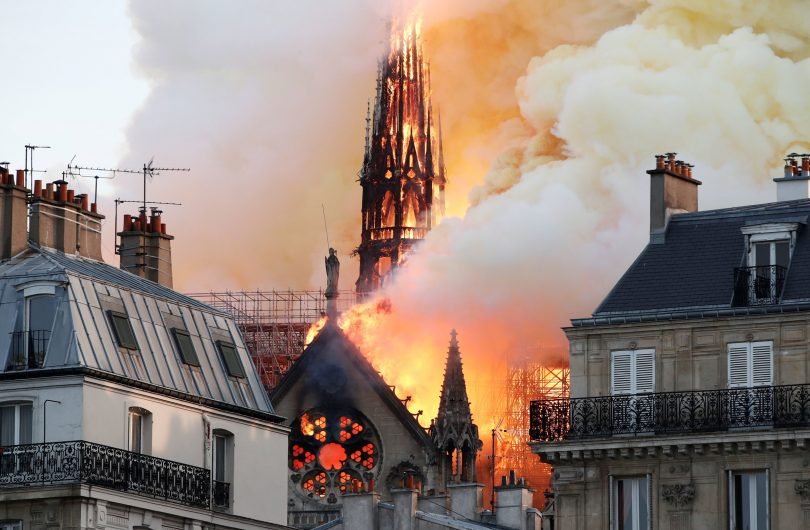 One week on from the fire that caused the destruction of the UNESCO listed Notre Dame in Paris, the incongruous political responses to this incendiary tragedy reveal the ways in which political propaganda continues to function. Quite removed from Obama’s statement that ‘it is in our nature to mourn when we see history lost’, the French political elite, and their opponents, have found common ground in their tendency to manipulate, or spin as political jargon puts it, the blaze to further their own causes.

Macron’s presidency has suffered six months of hard opposition from so called gilet jaune protestors, who first rose up in November of last year to protest the rising cost of fuel. With the inflation of the TICPE tax (‘Taxe Intérieure de Consommation Sur les Produits Énergétiques’) pushing up prices for drivers at the petrol pump, the tariff designed to ease France into its transition to green energy by encouraging consumers away from dirty fuels has inadvertently damaged, almost fatally, Macron’s ability to rule. As the movement has grown, the focus of the campaign has broadened, and now it seems that to sport a yellow jacket is simply to express a general discontent at the rule of Macron, dubbed by the people as the ‘président des très riches’. And the protestors have been successful in their efforts to make their discontent known. Gilet jaune activists have systematically wreaked havoc on French streets, imposing road blocks and barricades across the country’s monumental network of highways, rioting in the streets of Toulouse, Bordeaux and Paris, vandalising some of the capitals most exclusive commercial zones and documenting their fight across social media to disseminate their message to hordes of new supporters. In the face of this countrywide, bottom-up backlash against the political elites, Macron’s presidency has floundered. In spite of the fact that his own sunrise political party, ‘La République, En Marche’, won popularity on its promise to be a grassroots party of the people, Macron has thus far failed to formalise a messaging strategy to reunite the French people with his political vision.

The fire, which tore through France’s most visited tourist attraction last Monday, then sparked the ideal opportunity for Macron to retake the support of those who had once found accord in his political vision but who have since been turned by the calls of the high vis brigade. Last week, Macron addressed the French people, declaring unapologetically his hope that the Notre Dame fire would work to ‘unite the nation’ once again and give citizens a reason to set aside their differences and come together in common mourning for the cathedral. In the face of the destruction of the cathedral, which since 1163 has stood for the entire French population regardless of political affiliation, Macron is appealing to those in provinces and seeking to encourage a dissolution of the high walls that they have constructed across the French political landscape.

To Macron’s disdain, those within France who he hoped to appeal to have themselves seized the Notre Dame fire as an opportunity to shout louder their rallying cries against his rule. Communist rumbles were the first to quietly manipulate the headlines to their own advantage, critiquing Macron’s government for austerity measures imposed on the French and holding responsible cuts to public spending for the crumbling of the historical and cultural landmarks that have come to represent the nation. Communist messaging only accelerated as hundreds of millions of tax deductible euros from only a handful of key business families came flooding into the fund for the reconstruction of Notre Dame, a symbol of the huge financial inequality that still exists in France.

As funds grew to exceed 1 billion euros, gilet jaune protestors, who for a few weeks had retreated from the front pages of French papers, took to the streets once again, harnessing the financial response to the Notre Dame fire to their own benefit. With their fluorescent yellow jackets fastened, the gilet jaune pit themselves further against Paris by complaining at the immediacy of the financial response to the collapse of the cathedral, juxtaposed to the less than paltry response by the state to the decline and defacement of provincial monuments, which fail to attract pulsating throngs of tourists, but nonetheless are not insignificant to French cultural history. Indeed, in recent years, and increasingly frequently in the last few months, churches across the country have been subject to extreme acts of vandalism by anti-Christian demonstrators. From Calais to Cannes, sacred chapels that serve local communities have been set alight in vicious arson attacks, gravestones smashed, and icons at which devotees kneel defaced. The organisation ‘L’Observatoire de la Christianophobie’ documents each attack, and even a cursory glance at their website makes clear the extent of the damage that has been inflicted upon Catholic churches in the French provinces. It is the state’s ponderous concern for the redevelopment of these local monuments quite countered to the speed with which Macron spoke out in favour of the rapid reconstruction of Notre Dame that has given the gilet jaune renewed fervour with which to protest.

Quite aside from the opponents to Macron’s presidency within France itself, the fire at Notre Dame has also attracted response from external commentators looking to weaponise the headlines to advance their own rhetoric against the French. Right wing Russian commentator Yegor Kholmogorov has cited the fire at Notre Dame as retribution for France’s apocryphally overinflated role in Syria. Hungarian Victor Orbán, the leader of the Christian party Fidesz, has laid the blame at the feet of the policy of laicité, a key pillar of the French consciousness since 1905, which officially demands the separation of the Catholic Church from state, and practically institutionalises the banning of all religious accoutrements, of any denomination, from the public realm. In spite of the fact that 60% of the French population identify as Catholic and choose to practice Catholicism in a manner removed from the state, Orbán has been vocal in his belief that the French ‘anti-Church policy is…deeply responsible’ for the tragic loss of the monumental cathedral.

Quite aside from revealing the role that ancient monuments still play in the cultural lives of countries as France, the fire at Notre Dame has highlighted that political spin has not fallen out of fashion. A tool used by Alistair Campbell to refresh the face of Labour under Tony Blair, it seems that political propaganda was not left behind in the 90s, and still thrives today, fuelling the political play offs that exist between ideologically opposed factions.