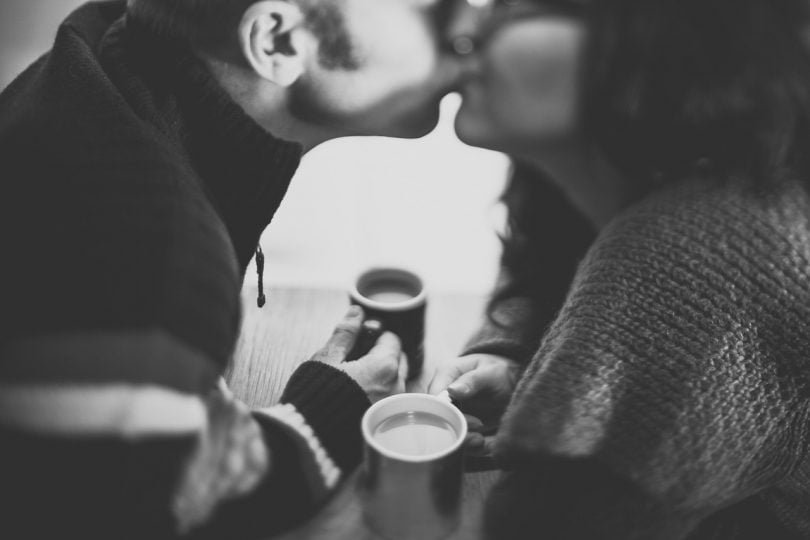 Standing on platform 1 of Clapham Junction in London waiting for my now 10 minutes late date, I wondered if another attempt at finding love was even worth it. I was 28 years old, I’d never had a boyfriend, and my adventures into dating had all resulted in disaster and perpetual questioning of my own self-worth. But when I first met my now ex-boyfriend, I thought my life was about to play out like my own real-life version of The Big Sick. He, a British Pakistani Muslim man who had to keep me, a white American atheist woman living in London a secret from his family and that our love would overcome all…Yeah, right.

Unfortunately, ours wasn’t such a happy ending, but our relationship taught me more than I ever would’ve expected.

About my own privilege, about the problems mixed relationships still face today, and about the capacity of my own heart. It opened my eyes and made me see the importance of cross-cultural dating and how enriching interethnic relationships can be, even if they do crush your heart into a million tiny pieces and don’t always work out in the end.

We first met in the oh-so-romantic virtual world of Tinder. We only talked for a few days before setting up our first date at a steakhouse in London. Having had like most single, late-twenty somethings, horrible dating experiences in the past, I was hesitant to allow myself to be open to anything serious but fell for him nearly instantly. We just ‘clicked.’ Our differences and the variations in our cultures and upbringings were non-issues. I knew that he was of Pakistani descent and the topic of his religion came up within the first few hours of our date. The waitress asked us if we’d like to be seated in the Halal section of the restaurant. “No,” he replied, “It’s fine.”

“You racist a**hole,” I scolded myself as we climbed the stairs to dinner. “Assuming just because he’s a handsome brown man, he must be Muslim!”

He actually told me he was as we took our seats and he declined a drink asking me if I’d like a wine or cocktail but went on to explain that he wasn’t really practicing, though he didn’t drink or eat pork. He had his other vices; however, and I never once saw his religion as an obstacle for us. He wasn’t devout in any sense and being of no denomination myself, I was interested to learn. We had many open discussions about our future together. Planning our lives, moving back to the US, talking about children. I built our life we’d narrated for ourselves in my mind and you know what? It looked pretty damn good.

I tried to learn more about Islam and discuss it with him. I was curious and I was in love. I wanted to know everything about him but especially about the aspect that fundamentally separated us.

As an American, Islam is a constant topic of conversation in the US but rather than learning about it or being informed, Islamophobia clouds our country under a debate not based on education but based on fear and ignorance.

Only about 1% of Americans are of the Islam faith and less than half the population actually knows a Muslim person. Many Muslims claim to have few non-Muslims in their own close circles or as intimate friends. Our relationship and the fact that he was so immediately accepting of me or the fact that we could openly discuss our assumptions, concerns, disagreements, frustrations, or misunderstandings made me proud to be his partner.

During the first few weeks of our relationship I discovered a lot about his family and began to get an understanding of our differences. He told me that he couldn’t introduce me to his family or even tell them about me because it’s not acceptable to date a woman, especially a white woman, and only when we were at the point of marriage would I no longer be a secret. He assured me again and again that when the time did come, it wouldn’t be a problem.

Over the months I discovered that it would, in fact, be a problem.

We began to see less and less of each other. Excuses tied to necessary familial obligations filled my inbox after failed plans or waiting around for hours. I couldn’t say anything or get angry because I understood the importance of family. Who was I to complain?

“I can’t give you the love or attention that you want or deserve. My family will never accept you and you will always feel like an outsider. I know it hurts you not to be involved in things and it will only get worse. It’s better to just end things now”

It opened my eyes because for the first time in my life I wasn’t good enough solely because of who I was as a person.

How I was raised, who my parents were, what I looked like, etc. I wasn’t wanted for reasons that I couldn’t control and for things that I could never change, but I was so willing to try. I wanted to understand and learn about his culture. I wanted to be accepted and yet, I wasn’t allowed. It was a big wake up call into my own privilege and at having my first tiny taste of not being accepted.

Our relationship, like so many others was a high stakes culture clash, where choosing your partner could mean being cut off from your family forever.

I never wanted to come between a family or be disrespectful of their culture. I wanted to learn about it and try to empathize the best that I could. But how can two cultures who historically don’t want to understand each other, who fear each other ever welcome one another? How can cultures mix without losing their cultural identity entirely? How do we create new generations of open-minded children who are able to choose their partners solely based on love alone without backlash or a fall out from their families?

I wanted to find out more about the difficulties, if any, that mixed couples face. I conducted a survey of 110 people across Facebook and found that 97% of these respondents had dated someone from a different culture. Of those, 62% claimed to have encountered some type of problem due to a difference in culture. And 45% reported feeling judged or negative pushback from friends and family because of a cross-cultural relationship.

I received 71 individual responses detailing different obstacles people faced in their own intercultural relationships and 23 private facebook messages. Some of these stories included problems with miscommunication, racism, issues with religion, secrecy and not being able to introduce (mostly girlfriends) as more than friends, differences in goals and dreams, realizing the complications of raising a child under two opposing faiths, issues with being accepted into a family, and so many more. Perhaps the saddest of these replies, besides numerous stories detailing failed relationships, was that ¼ of the respondents said that someone’s difference in background would prevent them from pursuing a relationship. I’m lucky to live in a society where I’m extremely privileged in many aspects, but maybe most so in that I have an undeniable right to choose who I marry for love. It’s important to be respectful of one’s family and culture but it’s essential to exercise your right to choose your forever partner and make these boundaries clear for family and friends. Choosing to be with someone who is outside of your culture doesn’t make you any less “you” or detract from your cultural identity and it shouldn’t cause you to feel like you are turning your back on your customs.

Maybe I find it more difficult because I don’t associate with a particularly strong sense of cultural identity. I’m an American but my ancestors were Italian, Swedish, Hungarian, Western European, etc. I was once proud to be from a country that considered itself a melting pot before I started to see the actual reality that my own privilege had blinded me to. And before we started closing borders and stamping out differences. I shamefully speak only one language. Though baptized and confirmed a Christian, I don’t associate with any denomination. After losing both of my parents, I don’t feel a need to prove my relationship to anyone or to seek approval of it.

I never pictured myself dating a Muslim man. Growing up, I don’t think I had ever even met a Muslim and my first encounter with Islam was hearing endless Governmnet propaganda about terrorist groups and radical Islamists (that so many Americans continue to blanket over the entire religion) after September 11th. I know that I still have a lot more educating myself to do and not just in regard that particular aspect. I know that I will never be able to understand the complicated history, pasts, or values of so many different groups of people or the struggle to maintain one’s own cultural identity without risking its collapse to a dominant one. I know that that I won’t always be accepted myself. But being in a cross-cultural relationship taught me that I can make myself more aware of my own ignorance, that my relationship always needs to come first if it’s going to work, and that being with someone who has a completely different story than my own makes for a much more interesting new chapter. The first step to acceptance is understanding and I hope more people see the value in it.

A 28-year-old midwesterner born and bred just outside of Cleveland, Ohio who has found herself exploring the world for the last three years. She taught English in Spain for two of those years and now you can find her roaming the streets of London, studying for her Masters degree in Advertising and Public Relations, or binge watching the newest murder mystery on Netflix. The travel bug took a strong hold and she hopes to never stop adventuring. You can find her adventures @mapsky62442