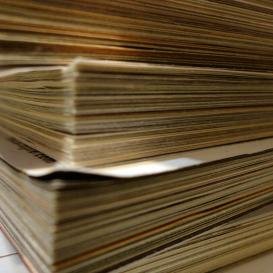 There’s something about that book you receive from the universities. That book, most commonly known as a prospectus contains around 80% of everything that you need to know about that particular university in order to help you to decide whether it’s worth visiting and, later on along the line, worth taking up one of your five choices on you UCAS application.

The reason why I mentioned 80% is that the remaining 20% definitely comes from what you think about the university itself, views from students who are already there, looking around the accommodation and seeing what the city and your course is all about. There’s usually only a page, or maybe even only half a page dedicated to your course, so they have to keep it short and sweet. Your best bet once you’ve had a thorough read through both the prospectus and the website a good 100 times (or maybe more!) is to visit the university itself. I really liked the sound of my insurance choice and the course seemed almost identical to the one offered at the university that I now attend, and have been in love with since 2013. But after applying and visiting my insurance choice, I soon realised the area wasn’t for me and that the course was also very basic and bland.

Why’s the Prospectus so Important?

The university prospectus is extremely important, it always has been and I think it always will be. Universities are making everything all digital now, you can even view prospectuses online. Why not just order one or collect one during an open day – they are free! You’ll find it a lot more attractive and often easier to read, store away and compare with other potential institutions that have caught your eye! Most importantly, a prospectus can be kept as a keepsake from your A-level years of applying to uni!

Has Social Media Murdered the Prospectus?

There is a lot on social media nowadays. All universities, if not the vast majority, have their own Twitter and Facebook accounts, and some also have Instagram. Sheffield University have one, and I hold my hand up to liking literally every picture that they post on there. There’s the YouTube channel, which allows the uni to show you what student life is like and offer up student opinions. I’d suggest you definitely take a peak as you’re bound to find something that makes you think: ‘wow, this university is cool.’ Being able to tweet a university and their specific departments, such as the accommodation office and their food outlets is pretty cool. This instant reply means you may not even need a prospectus, and that’s all well and good, but maybe you’d want something substantial to have from the institution to keep at hand for whenever you need it!

Prospectus all the way. I must admit, I ordered well over 50 prospectuses, and probably only read two all the way through.

I have a prospectus from some Welsh university, I don’t even know how to pronounce it

But they’re great to have because they’re super informative and I’m sure teachers everywhere will agree with me when I say nothing beats a prospectus. No matter what year we’re in, or how digital the world has become, you’ll always benefit more from the trusty prospectus. Some may look swankier than others, I ordered one and it was literally a five page booklet, whereas others are over 200 pages long. Remember that saying, “you can’t tell a book by its cover?” Well that’s extremely true. I was ordering away back in the spring and summer of 2013. A lot of the prospectuses had an image of their iconic building as the front cover, quotes from students, images of students etc.

Then came my University of Sheffield one. It was bright orange with the words discover and understand. It looked simplistic yet smart, but as soon as I opened up the prospectus, I knew it was the university for me.

The prospectus is a genius idea, I’m thankful there’s such a thing and I’m sure in the future, despite the rise of the digital age, lots of students will still benefit from the trusty prospectus.

What do you think? Did a university prospectus help or hinder your decision about university? Get in touch in the comments below!