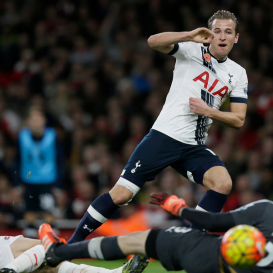 33 players were utilised by Roy Hodgson during England’s 100% qualification campaign, but only 23 can make it to France and this season has given the England manager plenty to ponder ahead of his final squad selection. The biggest dilemma looks to be up top, where Hodgson has a wealth of options to consider. The old cliché’ of a happy headache to have comes to mind, but ultimately Hogdson must make a difficult decision on whom to leave out. Here we take a look at the top contenders.

Leading the line in a title chasing team, 19 goals in 38 appearances and any fears of being a one season wonder, well and truly vanquished by Harry Kane. Having not missed a single one of Tottenham’s 27 premier league fixtures this season, completing 90 minutes in 21 of those, Kane has been instrumental in Spurs’ assent up the league. His power, positioning, finishing, aerial ability and predatory instinct shows he possesses all the assets required of a modern day number 9 and he could be the perfect foil for England’s more creative or dynamic attackers. Coupled with his inclusion in Hodgson’s recent squads, Kane’s consistent form this season looks certain to earn him a spot on the plane to France. The question of being granted a starting role will most likely depend upon which system Hodgson attempts to employ. Though Kane’s impressive performances are making it increasingly difficult to see how he can be left out. In the friendly’s leading up to the tournament he has a real chance to stamp his authority and lament his place in the starting line up come June 11th in Marseille.

Rooney’s position as England captain and record goal scorer mean that despite an alarmingly poor run of form towards the end of 2015 his place has never been in jeopardy. Encouragingly, his performances and goal return had begun to improve with the New Year but the Manchester United man is now injured for what is feared to be up to two months. Hodgson in particular will have been down heartened to see images of Rooney recently entering Old Trafford sporting a knee brace. Despite being likely to miss warm up games with Holland and Germany there is no fear of the injury will affect his participation in Euro 2016 and England fans will be hoping his recent impressive performances continue upon his return. It is however frustrating to see that after battles with form, fitness issues are now hindering the preparations of England’s captain in what may be his last chance to shine on the international stage. If England go with Rooney as their man up top then Kane is kept out of the side, likewise if he partners another striker or plays in behind it means sacrificing a midfielder such as Barkley or Dele Ali. It may well hinge on the opposition and how Hogdson wants to approach each particular game, but moving Rooney out wide, as was done at the 2014 World Cup, is hopefully a plan confined to the past.

When Daniel Sturridge is fit for Liverpool he rarely fails to deliver on the goals front. In his time on Merseyside he’s netted 45 times in 63 appearances, which is a remarkable return. The issue is, Sturridge rarely is fit and he’s scored only 10 of those goals over the last two seasons in which he’s amassed just 30 appearances. If he now stays predominantly injury free until the end of the season and notch’s more goals to his name then his undoubted ability and previous international experience (not extensive, but he did start in the World Cup) should certainly see him worthy of a place in the squad and most probably the starting eleven. However, were Sturridge to suffer another lengthy set back or even contribute the odd goal here and there amidst more minor knocks Roy would be left sweating on whether taking him was too much of a gamble. With a superb combination of electric pace, movement, nimble footwork and deadly finishing, on his day Sturridge is one of the premier leagues finest strikers. He just needs to stay fit and have his day on a regular basis up until May to guarantee his spot.

Danny Welbeck’s inclusion is an intriguing case. The rise of Kane and Vardy alongside his 6 month spell on the sidelines may have caused many to have written him off when it comes to Euro 2016. Yet, this is a man who has consistently delivered when in an England shirt and has the ability and temperament to play as both a striker and a wide man. Which is more, he has been favoured by Hodgson in the past and so should he stay fit is more than likely to be considered by the man at the helm. Fitness issues aside, concerns still remain about Welbeck’s goal scoring capabilities. Despite 2 goals since his return to action a couple of weeks ago, he is not as potent as England’s other striking options. This may well be something held against Welbeck, with his career goals per game ratio comfortably worse than that of his international colleagues. Yet, he has found the net 14 times in 33 England caps and been involved at both Euro 2012 and the World Cup 2014. This experience on the international stage will sit well with Hodgson when it comes to making his final decision, as will Welbeck’s versatility. Hodgson could end up taking him as a winger or 5th striker, perhaps at the expense of one of his Arsenal team mates Theo Walcott or Alex Oxlade-Chamberlain. Both have proven frustratingly inconsistent for the gunners this season.

Leicester City as Premier League champions and golden boot winner Jamie Vardy is on his way to the Euros. Even the most optimistic of Leicester fans would have been hard pressed to have predicted that back in August but it is now becoming an entirely plausible prospect. The foxes may not win the title; Vardy may even be piped to the accolade of top goal scorer but one thing is for certain, his performances this season have made him in Hodgson’s own words “a very strong contender” for a place on the plane. Vardy is not everybody’s cup of tea but 19 goals and his continuous tormenting of Premier League centre halves have ensured that even the sceptics are running out of reasons to deny his potential inclusion. There is a possibility that lack of European and international experience will count against his chances, especially if messrs Sturridge and Welbeck get fit and firing once more. Yet, should Vardy continue on his prolific campaign then he’s certainly earned the chance to be in with a shout of rounding off his fairytale rise from the Football League with an inclusion in the squad.

Theo Walcott has made 42 appearances for the national side in a topsy-turvy 10 year England career. Injury, selection and England’s failure to qualify for Euro 2008 have meant he has played in only one major tournament (Euro 2012) during that period. Walcott has scored just 6 goals for Arsenal in a season when his talents have again only been displayed in streaky fashion and question marks remain over his ability to deliver consistently. A recent woeful showing at Old Trafford has not helped his cause. There’s no doubt that should his form pick up, the Arsenal man can be a more than useful tool for England, especially given his blistering speed in behind the opposition. However, given the options available to Hodgson (as shown above), despite considering himself a striker, Walcott’s best bet of inclusion is probably to be taken as a wide player.